The next morning as I showered I heard pots and pans clattering in the kitchen and was a bit surprised when I came out to a full spread for breakfast which Haruka had prepared. Such a fantastic host - and did I mention she insisted I take the bed while she slept on the floor mat? Too nice. I was soon out the door and on my way back to Kyoto station via bus (which yes, to the dismay of my Korean co-workers, I was able to navigate by myself). Today's main objective was to make it to the Fushimi Inari-taisha Shrine, so I set this as my first destination.  The shrine is one of the most visited in Japan and notably so as it contains over 5000 orange torri gates, winding through the hills behind the shrine. 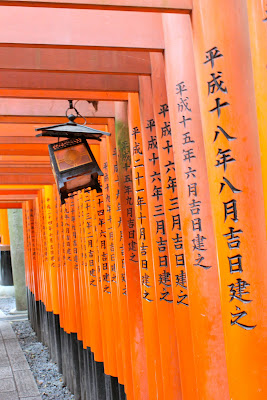 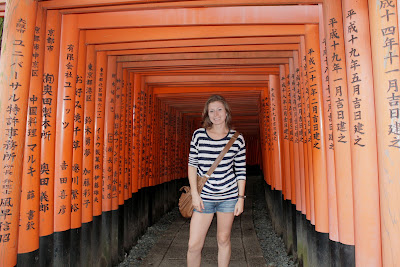 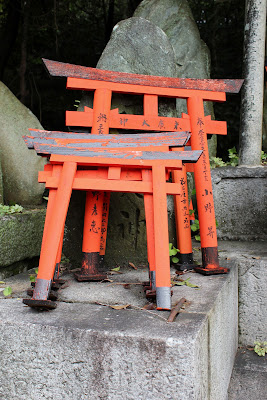 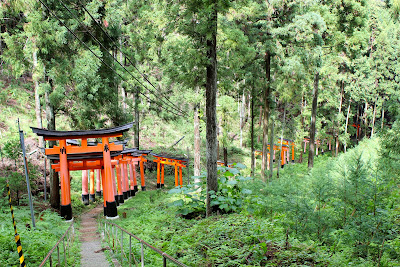 After wandering the hills for a few hours I decided I should probably try to make my way back to town, there was still plenty to see in Kyoto! I strolled back through the shops outside the shrine and was sure to buy some green tea ice cream, which was delicious, before finding the bus home.  It was still another 20 minutes before the bus came so I decided to wander a bit, eventually making my way to the next stop down the street, thankfully I'm easily entertained and my camera provided me with entertainment in the interim. 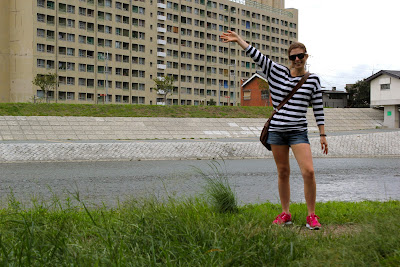 I got back to Kyoto station around 3:30 which left me plenty of time to visit one more temple (as most of them close by 5pm).  Due to numerous suggestions from friends I set me sights on Rokuon-ji temple, which is home to the famous Kinkaku (Golden pavilion), named a World Heritage site in 1994. The temple is a zen Buddhist temple and the garden and buildings are said to represent the Pure Land of Buddha. To be honestly I was considering passing this stop but boy am I glad I didn't, the temple really was a sight to see. 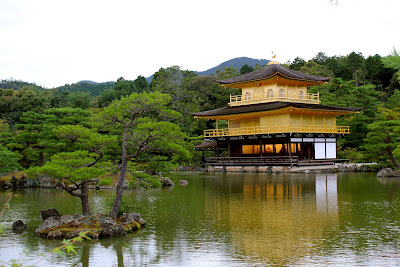 I was planning to meet Haruka for dinner at 7:30 so I still had some time to kill before heading back to the station.  Although the Imperial Palace closes at 5pm I decided that it would still be worth it to take a walk around the palace gardens, plus it was free! The garden was HUGE and actually a bit eerie as the sun began to set.  There were still many people walking, running and biking around the park, but as it got dark I decided to make my way to the well lit streets of the city. 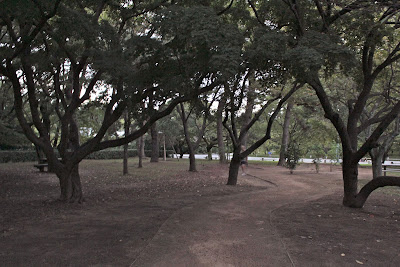 Although the sun had set, I saw my fill of Kyoto and had been walking all day, I decided to continue with my marathon tour of Japan and walk back to the station.  I had time before my planned meeting with Haruka, so why not? It was a straight shot to the city so I had no fears of getting lost along the way, plus it gave me a chance to experience the city away from all of the tourists.  I arrived just in time to meet Haruka and we then proceed to find a sushi restaurant for dinner.  YUM I'd go back to Japan tomorrow just to eat some fresh, delicious, non-Korean style sushi.  Although it was short trip, accompanied by a typhoon, I thoroughly enjoyed my time in Kyoto. I said goodbye to Haruka and made my way to yet another overnight bus, this time en route for Hiroshima.
Posted by Stephanie at 11:23 AM