The Effects of One

Todays article is written for the Reach To Teach Teach Abroad Blog Carnival, a monthly series that focuses on providing helpful tips and advice to ESL teachers around the globe.  A new topic and various articles will be posted on the 5th of every  month, so come back often!

Teaching English in another country is definitely a unique and ever-changing experience, I remember being told from day 1 that there is no REAL way to prepare the new teachers. For every incoming teacher, their city, school, co-workers and of course students are going to vary drastically.  I strongly believe that it's a teachers attitude that is going to "make or break" their career abroad.  Coming in with a positive outlook, ready to take on any challenges or obstacles is going to set you up for success.  Of course, there may be difficult moments full of challenging students, frustrating situations, and surprise schedule changes, ultimately making you want to say,  "I'm done with this", but the rewards are soon to follow.  After spending close to two years in the classroom i'm happy to say that I've had a positive experience and wouldn't trade it for the world.


Looking back on my time teaching in Korea it's not too hard to pinpoint moments of success, those moments that i'd be proud to share with my friends and family back home, proving that i'm doing something here.  I think most people, if asked the question "What lesson or moment are you most proud of in the classroom" would immediately think to something they did, an accomplishment they've achieved.  I however, initially thought of my students, my proudest moment is watching the changes that occur in them, I'm proud of the strong, smart, adventurous people they're becoming.

When people find out that i'm teaching at a co-ed, public high school they often respond with signs or moans of sympathy, as if I have it hard.  Although my students can be a handful, I wouldn't trade the teaching experience I've hard here for anything.  High school is a pivotal time in a students life, not only are they dealing with the pressures of school (higher in Korea with the stressful CSAT) but it's a time of figuring themselves out, discovering who they really are.  I used to laugh at teachers spouting such statements (it does sound pretty cheesy) when I was a mere high school student, but I now understand.  To get back to the point of this post, my proudest moment in the classroom is watching my students grow, whether it be in their English ability, courage to try, or simply becoming themselves, I'm glad to be here to see it - and can only hope that I had a little something to do with it. 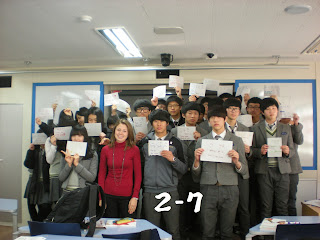 There are moments that I feel like my time spent here is a waste and that my efforts in the classroom are falling on deaf ears.  Then suddenly, as if my students were mind readers they remind me why i'm here and prove to me that I am making a difference.

As my first school year came to an end I met with some of my favorite students outside of school for dinner. While sitting there, enjoying our fried chicken, one of my boys said to me, "Teacher because of you I'm not afraid of foreigner anymore, and you are not like our teacher, just friend".  Seeing as I already thought of my students as some of my best friends in Korea, it was awesome to hear they felt the same.  Actually, it's somewhat amazing to me how students here can balance a friendly demeanor as well as high respect for me, the teacher/friend/student relationship is pretty awesome.  Now, not fearing foreigners may not sound like the most exciting thing in the world, but after having lived in Korea for close to two years it's a pretty bold statement.  It's amazing how often I see fear in the eyes of those around me - cafe workers, waitresses, taxi drivers, bank tellers, you name it, they're all mortified that they might have to speak to the foreigner.  If my presence has created at least one more brave sole, who wont' be afraid to talk to "us" then i'm happy to have helped.

Similarly I had another student approach me in the hall one day and tell me "Teacher, I want to talk to you, but English no"  I told him that's fine, just try, to which he responded, "Teacher, for you I will study English really really hard".  I'm a firm believer that in order to effectively learn anything, especially a second language there needs to be internal motivation. Sure, you can say "I have to learn this for my test" but to really remember the words and put it to use you have to want to.  Even if the motivation is as simple as wanting to talk to their foreigner teacher I'd say it's enough, and once again i'm glad to have helped.

Okay actually ALL of that was just introduction, my proudest moment in the classroom comes through the story of 손정현, quickly becoming one of my favorite students.  It's hard to believe it was almost two years ago when I first met this student and was quickly introduced to the world of special ed treatment in Korea, which left me both confused and frustrated.  Our first class period 정현 refused to even introduce himself and instead added multiple moments of distraction, interruption and some singing to our class.  At the end of class my co-teacher told me "Don't mind, he's disabled, maybe he won't come to your class next time?" presented as a combination statement/question.  My frustration and confusion had nothing to do with this student, but rather the way the students and staff decided to deal with him.  It was clear to me that he was looking for some attention and at my best guess i'd say he likely has ADHD, but never would I label this boy disabled.  The whole issue of special education in Korea is an entirely different story, but I will say that i'm lucky to work at a school with a special education department, which is not always the case at other schools.

Over the next few months 정현 came to my class pretty regularly and even sat for the speaking test at the end of the semester.  I could see the fear in his eyes as he sat down and knew that the normal questions would not do.  Instead, I asked him about soccer - something I knew he enjoyed as I saw him out defending the goal every lunch period.  Immediately his eyes lit up and he yelled, "soccer??? yes! me goal" , the conversation soon changed to favorite foods and before long his time was up, actually exceeding that of most of his classmates.  I'm not sure if this was our breakthrough moment but I was soon greeted every morning with a "Hi"  "Oh, Stephanie!"  and eventually "Good morning!".  It may not sound like much, but the mere fact that this boy would not even look me in the eyes a few months before I was extremely proud.  I don't know if he was simply breaking out of his shyness with me or purposely studying English, but his improvement continued.

I still feel like he's ignored by most other teachers and quickly labeled disability boy from his classmates but I see so much more in him, and I think he knows it.  It angers me that people are so quick to judge and label each other, of course not limited only to Korea, but it makes me happy to see 정현 ignore most of it.  One day he came in late to class which elicited a few "oh disability boy" from his classmates; later that afternoon I met him outside and he pulled me aside to tell me "Stephanie, I am not disabled".  Of course I already knew this but I was so proud of him for wanting to make sure I knew it and having the courage to express this to me in English. 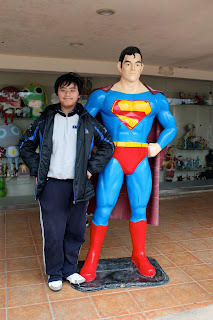 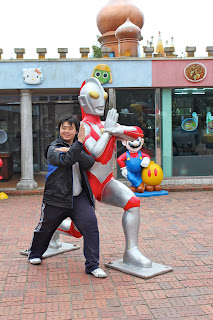 Mini photo shoot with 정현 during our Jeju trip

We've had various other interactions throughout the school year, the morning greetings have continued, during lunchtime soccer matches the goal commands my attention, and we even had a mini photo shoot together during the class trip to Jeju. I've even run into 정현 outside of school at the local soccer field/park where he is both surprised and excited to see me.  On one occasion he introduced me to his younger brother and friends whom he was clearly responsible for looking after that evening, a fact many of my co-workers and students are probably unaware of.  Despite the language barrier and his disability we manage to communicate just fine, in fact his eagerness is a hell of a lot more welcoming than the cold shoulders I receive from many.

I'm not sure if it's a coincidence or fate that I decided to sit down and finally work on this blog post, but this morning I had my final speaking test for the year with 정현.  I could tell he was hesitant to make his way over to my desk but upon getting there flashed me his familiar smile.  I may have spoke Korean instead of English but my main goal was to get him talking and keep the fear barrier at bay.  In our normal English/Korean mix we were able to talk about his winter vacation plans which include seeing his girlfriend, information I was previously unaware of.  Actually I don't think many people are aware because after the test he made sure to tell me many times that it was a 비밀 [secret], so please don't tell anyone. :)

Posted by Stephanie at 1:53 PM