Last weekend was the perfect kickoff to the Christmas season as I celebrated the holiday with my first family of the year.  Saturday the 15th was the holiday party at Samsungwon, the orphanage i've been volunteering at for the last 8 months.  Volunteers from across Korea came to play with the kids and of course bring presents.  I was a bit surprised that I was one of two volunteers from the Gumi area, I really thought there were more people visiting the orphanage on a regular basis so i'm not sure why they didn't show up on Saturday, oh well, only makes me look that much more awesome.  Each volunteer was asked to raise 75,000 won which would be used for purchasing gifts for three of the children at the orphanage.  I was able to be matched with the three boys i've been working with and although they don't know the gifts came from me I had great pleasure in watching them open their gifts Saturday night.

Much to the disappointment of some and the excitement of others, it's official - I've agreed to renew my contract and sign on for a second year of teaching.  You can't please everyone

No Really, He's My OLDER Brother

And so the whirlwind tour of Korea continues.  After our adventure through Busan I thought i'd let Beau take it easy and give him another day to lounge around - although I did provide instructions and recommendations for him to do the hike conveniently located behind my apartment. I also told him that he should join me at school by 3pm for one of my favorite and highest level classes - but that never happened.... As it turns out I returned from school around 5 to find my brother lounging on his makeshift bed - mattress on the floor (which he hated by the way) explaining that after hiking and showering he just kind of crashed, therefor never making it to school. I wasn't too upset but I couldn't say the same for the students of class 1-1 who were expecting him.
GIVE ME MORE...
Posted by Unknown at 10:38 AM No comments:

It might be rare that I praise Wisconsin weather but I must say I can appreciate being raised in a state that knows how to deal with snow.  I'm not even talking about blizzards or big snow storms, I mean like a dusting of snow.  I thought the winter weather in Korea would be similar to that back home, and so far it hasn't been too far off. That was until last night when Korea got it's first snow of the year.

As I sit here writing this there's about 15 people missing from my office, including the vice principal. I can only venture to guess that the fresh snow has delayed their arrival to school.  Now most of you might suspect we had a pretty big storm here last night, right?  Well you'd be wrong in that assumption, to my estimate there might be 2 inches of the fluffy white stuff out there. ARE YOU KIDDING ME!?  I have a feeling i'm going to be continually entertained as winter progresses in this country.

Here's a few more amusing moments from the last 24 hours:

1. On my walk to school this morning saw a few cars spinning their wheels as they tried to drive down the road, clearly they never learned the "slow accelerate after a stop" rule.

2. This excerpt from an article in the Korean Herald: "Heavy snow blanketed central regions of the country.  About 8 centimeters of snow fell in the capital."  Yes, they did use the words heavy snow  and 8cm in the same breath (that's like 3 inches).

3. Just got a message that classes will be pushed back this morning due to "teacher and student delays in arrival" - okay this one is not amusing, i'm supposed to have a half day and because of this stupid white stuff and the countries inability to deal with it i'll likely have to stay longer. Not laughing anymore

4. At the gym yesterday I was watching the news as they showed the storm in Seoul - people were using umbrellas...

This is from my walk to school this morning, looks pretty treacherous right? 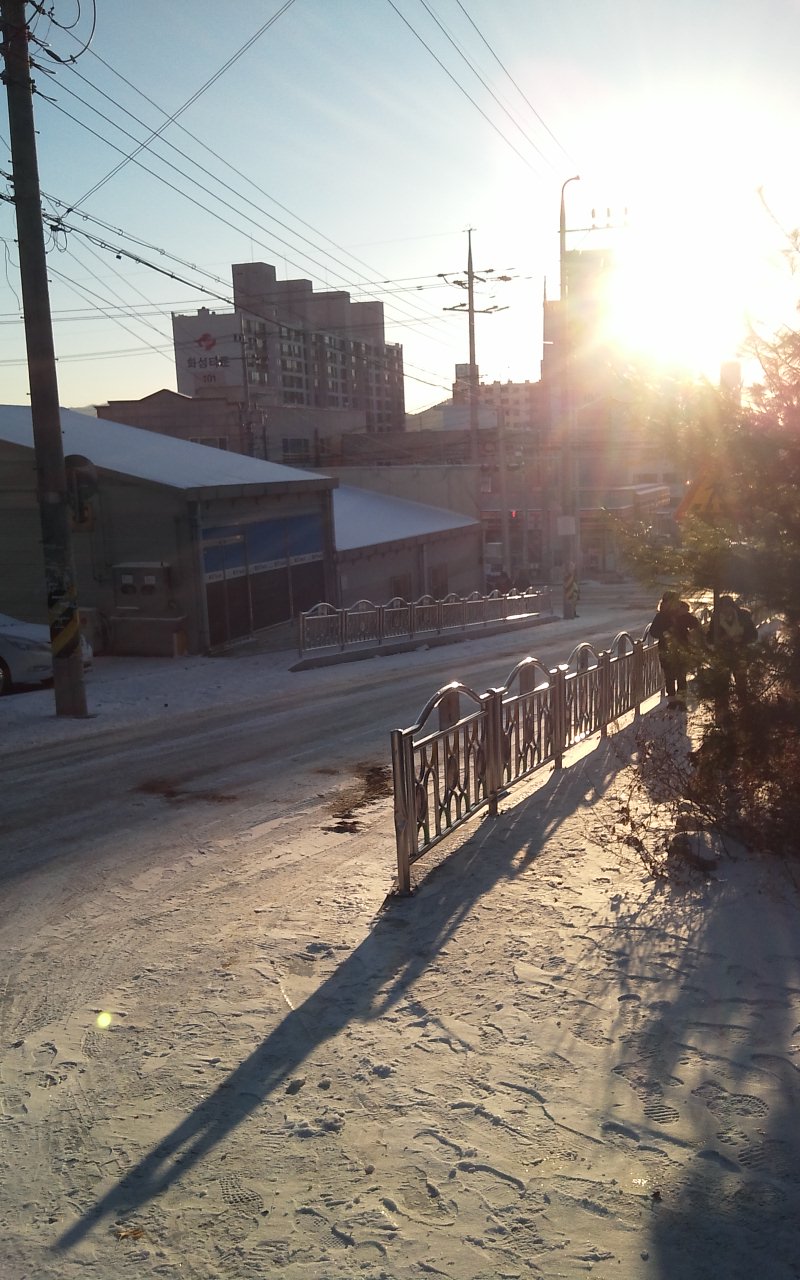 Now that it's been almost a month since his visit I guess I can relive it all by sharing with you how I entertained my brother for a week in Korea.  The visit started with lots of waiting (for me) while Beau made his way from Incheon airport to Hongdae (where our hostel was).  Thankfully my brother was a big boy and caught the subway on his own - saving me close to 2 hours of subway riding and a few extra dollars.  Finally he arrived and we were ready to set out in Seoul.  My friend Sara was in town that weekend as well and already out grabbing dinner and drinks with our friend Daniel.  Beau and I wanted to check out the lanter festival on the Choeonggyecheon and get dinner but told them we'd meet up later.  I had no idea how crowded this festival would be, but I definitely underestimated it.  There was a line wrapping up and down the block that seemed to have no end - all just to walk down to the water and see some lanterns, we were satisfied with the view from above so we walked along eventually ending at a busy street where we decided to find dinner. 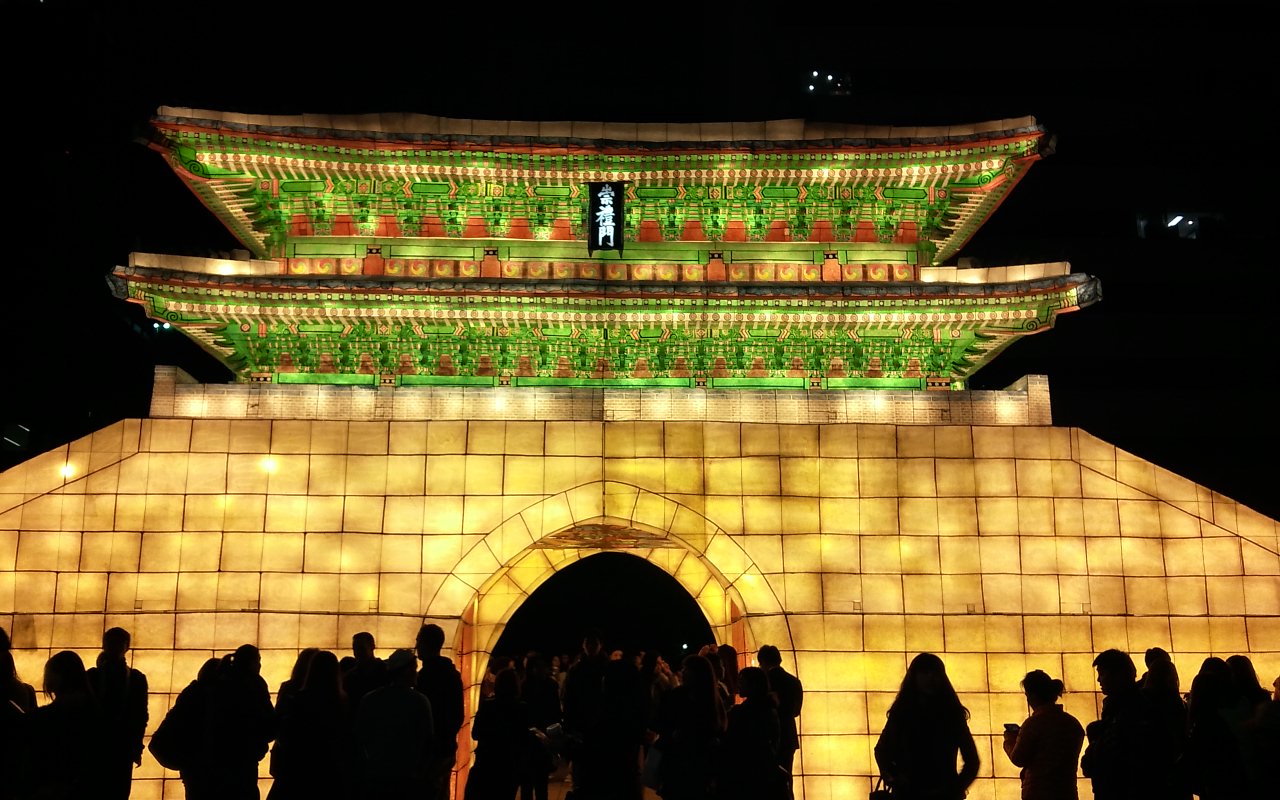 Well it's been a while since I've been here. I'd like to blame google for telling me i'm out of storage space for pictures on here, but in all honesty I've just been lazy.  I tried to upload pictures from my brothers visit a few times but apparently I need to pay for more storage on my account before I can do that - my exciting life has exceeded their 1GB allowance ;) In all honestly I've gone into winter hibernation mode where curling up with a book, blanket and tea or coffee often sounds like the best option available, so here's some random updates