Happy Birthday Buddha and thank you for giving me a three day weekend!

Last Monday was a national Holiday in Korea - officially 석가탄신일 referred to as Buddha's Birthday, thus providing me with a three day weekend.  Having the extra time I knew that I wanted to take full advantage of the weekend so Sara and I decided to navigate our way to Geoje Island - SW of Busan.  I did some minimal research and found that we could catch a bus from Busan thanks to the new bridge connecting the Island to the mainland.  The weekend snuck up faster than expected and we had failed to look into train tickets early so we wound up on the 6:55am train from Waegwon - really not a problem as it provided us with more time on Saturday.  Travel to Geoje went better than expected and we were on the island enjoying a lunch of Bibimbap, Kimbap and Namyeong by noon. 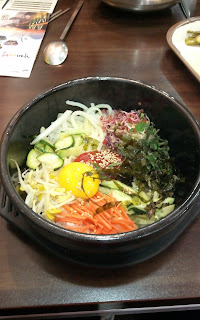 After filling our bellies we decided it was probably time to find a place to stay for the weekend.  Not even two blocks down the road we entered the A-Ju Park Hotel where a sweet little Ajuma (old woman) was working - she spoke minimal English but told us to wait a minute. Before long I was on the phone with the hotel manager who spoke [near] perfect English and next thing you know we were checked in.  The room was 60,000won per night but split between the two of us was worth.  Especially considering we're probably be paying 20,000 - 25,000 per person for a Hostel or Love motel - here we had our own room, bathroom and no unpleasant noises from our neighbors throughout the night.   After a quick face wash and change of clothes we were out to explore our new town.  Thankfully Sara and I can both read Korean or else we may have been at a major loss on getting out of Okpo - we found bus 11 and took it towards the port and ferry terminal (and what was supposed to be bus terminal - although that was never really located). 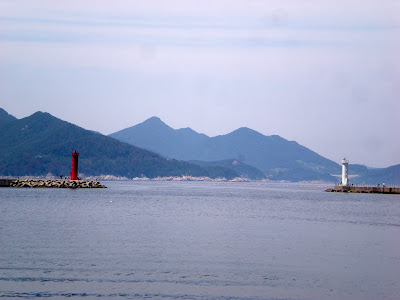 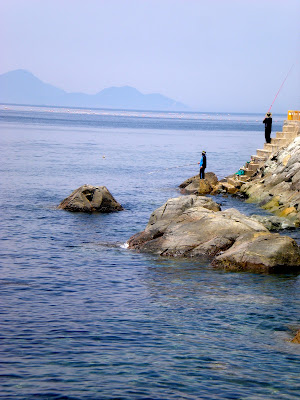 We rode the bus to the end of the line only to discover there was not much there, after walking around for a bit we got the bus back towards town and attempted to make our way to a beach.  Geoje island tourist map might be the worst map i've ever tried using.  The sights are easy to find on the map but there is little to no direction on how to get to them.  I'm assuming they did they in hope people would just join one of the multiple tour groups offered on the island.  We wanted to get to Hakdong Pebble beach which was on the south end of the Island but were having no luck finding a bus to take us there.   After some frustration and lots of wandering we decided to just suck it up and pay for a taxi (which actually wasn't bad, about $20).  We knew once we were there it'd be much easier to navigate our way home by bus. 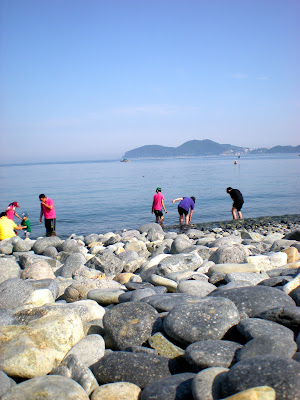 Cute matching family at the beach

Side note: i'm not sure how much i've talked about it before but matching is very popular in Korean.  No need to wonder if the couple sitting together at restaurant/movies/park is a couple - you'll know.  Couples here match - shirts, pants, shoes..you name it they will match it.  Most popular are matching tops and shoes - boys are not ashamed or hesitant to wear purple or pink, in fact I think they prefer it.  Also common are matching phone cases or backpacks / bags.  I've also seen - hanging in storefront windows - matching underwear for you and your boyfriend.  It's pretty cute and another thing that would never fly in America, I just don't imagine many of the males jumping in on this trend - at least not the ones I know.  Anyways this whole family joined in the trend and had matching polo's - so cute. 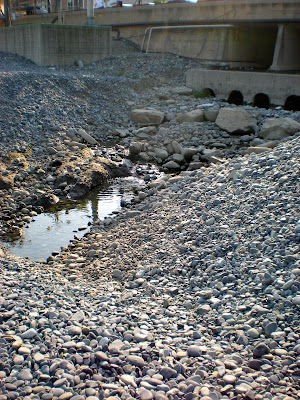 After relaxing at the beach (and yes it was relaxing albeit covered in pebbles) with a beer (Cass Lemon = not too shabby, much better than that miller chill garbage)  and some snacks we eventually made our way back home.  We had taken note of the bus routes in town before departing and were able to spot one that would take us back.   I thought the taxi ride to the beach was interesting, speeding through the winding hills and costal roads, forgot how much more fun the bus would be - especially riding in the WAY back.  Successfully making our way to back to Okpo by bus we were about ready to pass out - oh yeah we had been up since 6am.  Instead of exploring the bars of Okpo (which seemed to be harboring a few creepers) we opted for showers (in a real bathtub!),  romantic dinner catered by Mr. Pizza (literally it's what the pizza place was called), and a little Korean baseball - all before passing out around 10pm (p-a-r-t-a-y  a-n-i-m-a-l-s).

The next morning we were up early, at breakfast, and were once again on our way to the ferry terminal - this time to buy tickets for the ferry out to Oedo-Botania and Geoje Haeguemgang.  We knew the city was busy thanks to the holiday weekend but I think we underestimated just quite how popular this trip was.  Upon arriving at the terminal at about 8:30am we found out the first available tickets were for the 4:25pm ferry, without hesitation we bought our pair. 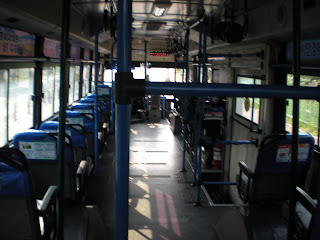 Seeing as we had about 6 1/2 hours to kill before our ferry ride we decided to make our way to Gohyeon and explore the area. Our lovely map listed two different spas in the city so we thought we'd start there and spoil ourselves with a massage.  Unfortunately the "spa" was not quite what we expected - basically just a sauna and jimjilbang (get naked and hang out with other Koreans in baths) whereas the massage was a totally naked scrub down from some Korean women - not exactly what we were looking for.  On to plan #2 - okay well there wasn't really a plan #2 so we consulted our shitty map and selected Mt. Gyeryongsan and the Oksangeum-seong Fortress as our next destination.  I'm really not sure how far we walked but we eventually happend upon what we assume was the fortress. 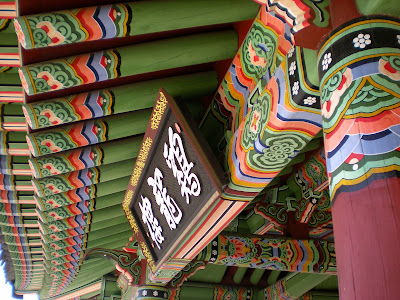 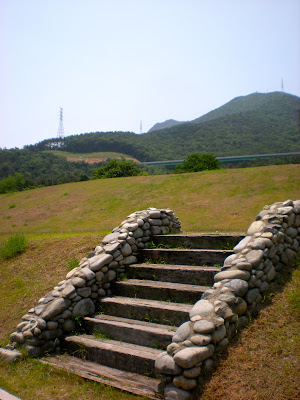 Our bladders were screaming at us by the this time so we decided to find a cafe and lunch which consisted of subs! (Not very typical here).  It was still only 1:30 but we determined there was not much more to see in Gohyeon and decided to make our way back - it's a good thing too because thanks to the holiday traffic our commute took about an hour and 45 minutes as opposed to the 30 minutes it should have been.  We got in line for the ferry at about 4pm (as instructed earlier that morning) and were joined by hoards of tourists (Korean and foreign alike).  Of course all the announcements and instructions were only in Korean but with our limited ability and help from some friendly Koreans we made it aboard our ferry and were off to the Botania. 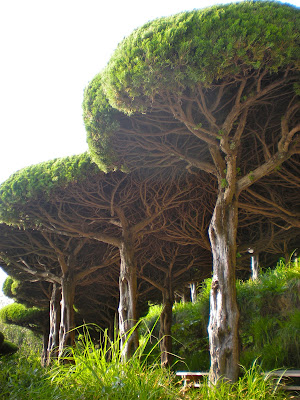 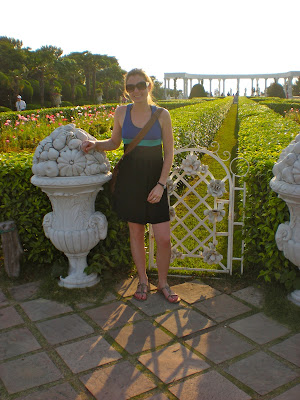 After the island our ferry boat made it's way to Geoje Haeguemgang island which means Mt. in the sea and is also referred to as the Sea Diamond of the South Sea. The island is part of an official "green area" in South korea and contains Shipjagul cave at the center.  The views were amazing and we were lucky enough to be there at the start of sunset. 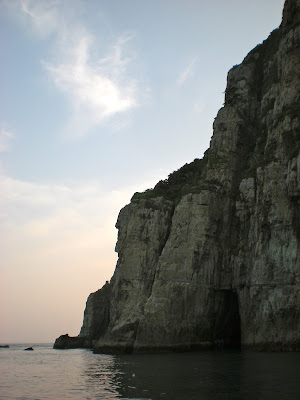 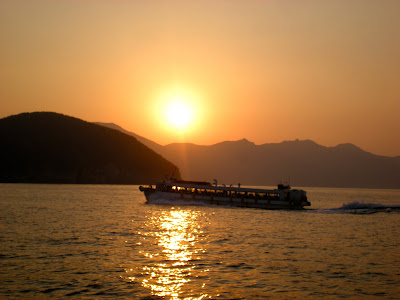 As soon as it started the weekend seemed to be ending. Our ferry got back to the port around 8pm and we sat on a rooftop patio for dinner - fresh Seafood risotto - yum! After that it was back to Okpo for some much needed sleep.  Monday we packed up, took a walk around our town (discovered the ocean was only a few blocks away) found a cafe to enjoy a morning coffee and then it was time to pack up and begin the venture home. (2 buses, subway, train and one more bus - I would complain but it all cost < $20 and was comfortable and efficient).  After the 2 buses and subway ride we took a break in Busan and met up with Grace (my roommate from orientation who's teaching in Ulsan) for lunch and some shopping. 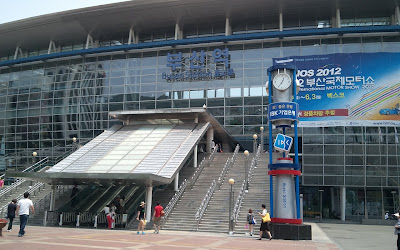 Another successful weekend, and this time glad to be back home in the comfort of my bed and small town - no more buses, please!  Traveling can really take it out of you, but thankfully on Monday my co-teacher Mr. Na told me that I looked "refreshed after the long weekend".

Thanks for reading, please leave any comments or questions you may have!

love and miss you all back home!
Stephanie