A Taste of the Good Life

If you would've told my Dad a year ago, that he'd be spending a week in Buksam, South Korea he probably would have given you his typical "what the fuck look", but look where he wound up!

So after our trek back from Seoul we were on bus 115 for the grand tour of Buksam.  I asked my Dad what he though and his response was "that was it?"  Yeah, I don't live in the largest or most exciting area, but I still love it.  Monday morning came all too soon, seeing as my first classes of the week are never the most exciting my Dad decided to stay home and explore town. I was curious as to how he would survive without being able to read anything or speak to anyone (really no one here speaks English) but I trusted he'd entertain himself.  I got home from school and to my pleasant surprise he had cleaned my whole apartment!  I joked about it the night before seeing as he's now become Mr. Clean at home, but since I have no cleaning supplies (aside from a broom and sponge) I didn't think he'd actually do it. But, lucky for me he ventured out to buy some supplies and my apartment is now the cleanest it's ever been.  Since I left him alone all day I promised a good dinner - one of my favorites, dakgalbi (spicy chicken and veggie dish) so we made our way to Otae-dong for dinner. 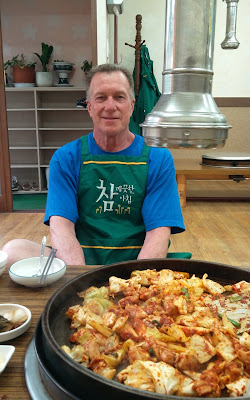 My principal was eager to meet my Dad and show him our school so on Tuesday it was like show and tell.  My dad sat in on my first two classes where there was a buzz about the students wondering who this tall, handsome, strong man was.  Seriously, the kids were amazed at anything and everything he did - "oh your voice is very good" "very handsome" "oooh so tall, and strong!" The kids even guessed he was in his 40's, if nothing else I guess the trip was a good ego boost. 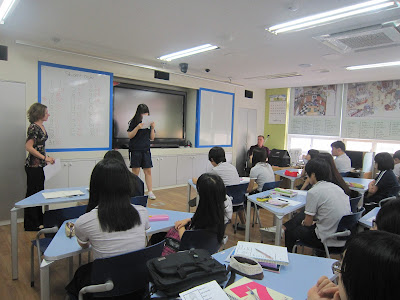 After class we met with my principal and were given a tour of the school (note: I didn't even get a tour when I started so this was my first time seeing a few rooms!).  Then after that it was time for lunch with the Principal, Vice Principal and two of my co-teachers. 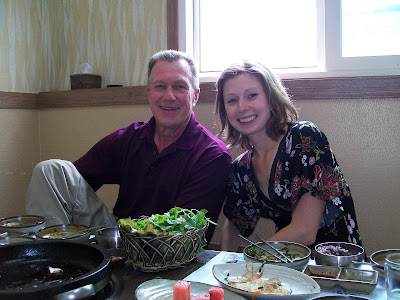 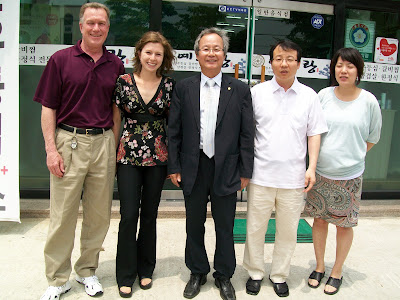 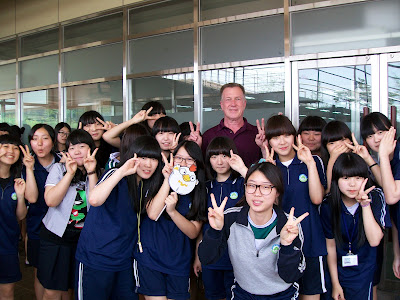 After our whirlwind tour on Tuesday I thought I'd let my Dad enjoy some peace on Wednesday.  He opted to hike the mountain behind my school - same hike I did with my school a few months ago, and from what I remember not too easy.  He enjoyed it and said he met a few friendly hikers along the way - which is pretty common on the hiking trails of Korea. I get out early on Wednesdays so that I can make it to Samsungwon by 5pm where I volunteer teaching some 3rd grade boys English (more on that later).  Another round of show and tell as I introduced my 아빠 to the children.  We played a few rounds of Uno but just like that the hour was over and we were on our way to find dinner.  I had an odd craving for 자장면 "black spaghetti" so thanks to a recommendation from my friend Sam we wound up at a Chinese restaurant near the station.  I ordered my dad 야지 우ㄷwhich turned out to be Seafood (baby octopus included), thankfully my Dad's not picky. After dinner we made a loop around the market in Gumi where my dad sampled a few more traditional Korean dishes and then it was back to Buksam.

Thursday morning the principal burst into my classroom asking me what I was doing after school and where was my father. I explained that my dad would join for my 3rd period class and that we were planning to go screen golfing after school. "My wife and friend will take you to Jikjisa temple - 3pm!"  Well, okay then.  My dad showed up for 3rd period and I told him about the change of plans before he was greeted by some of my best students - class 1-1. 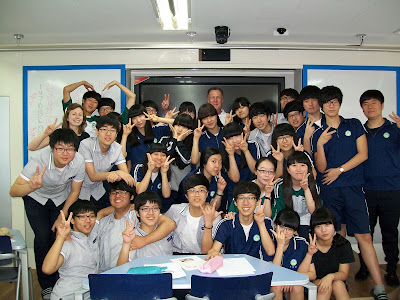 My dad was treated to a delicious cafeteria lunch, but I failed to document that part of the day.  In all seriousness though our lunches are not that bad - i'm starting to realize some are pretty bland/boring when compared to what you can get in a restaurant but for < $3 a day I can't complain.  At three we went to meet the principal and he led us outside - asking my Dad to help him put the boat in the pond next to school - I wasn't really sure what his plan was but then we were told to get it! Um what, me too? Yes, yes, come!  After our impromptu boat ride we were treated to coffee in the nurses room - with the principals wife.  Bascially it was a lot of awkward stares and laughing as we couldn't really communicate (neither the nurse or principals wife speak much English). 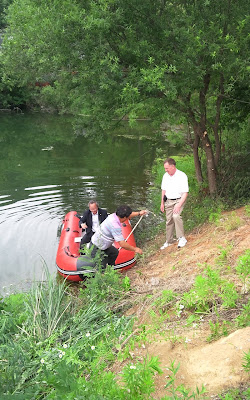 Finally the "friend" arrived and we were on our way to Jikjisa - a popular temple located at the base of Mt. Hwangaksan in Gimceon, about a half hour from my school.  Thankfully, the friend of my principals spoke really good English (unlike the friend that took me on my hike last time) so there weren't too many awkward silence moments.  She works in the travel industry and recently opened her own travel business so she seemed to know a lot about the area and was eager to share with us.  One of the most impressive things about the temple was it's location between the valley and nearby pine forest, really made for some gorgeous scenery. I also found out its one of the temples in Korea that offers a temples stay program so I may return in the fall for that. 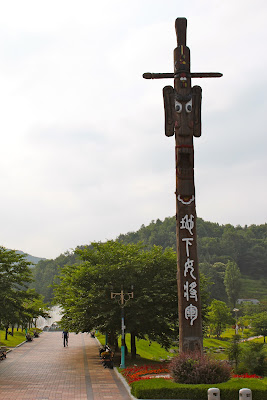 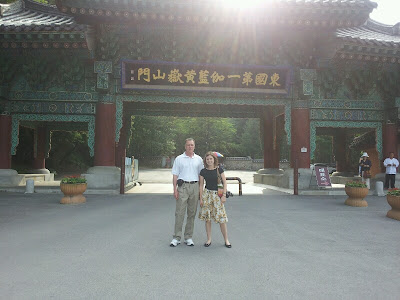 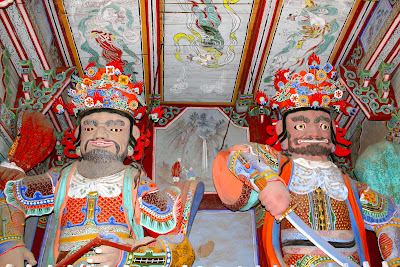 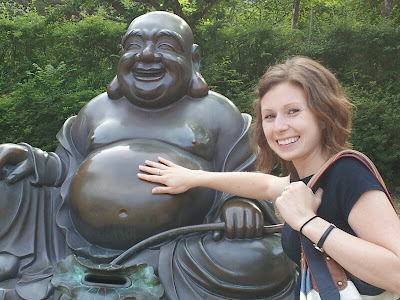 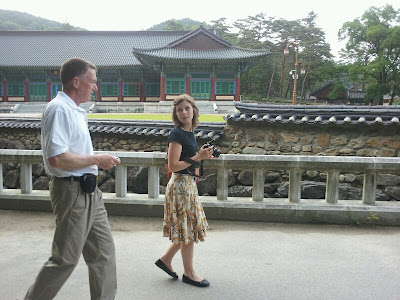 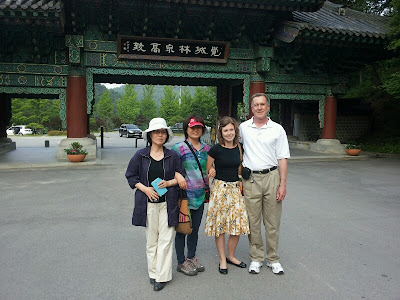 After the temple we were all ready to eat so we made our way back towards the parking lot which was lined with traditional 항정식 restaurants.  Basically what that means is that you're table is covered in dishes, literally. 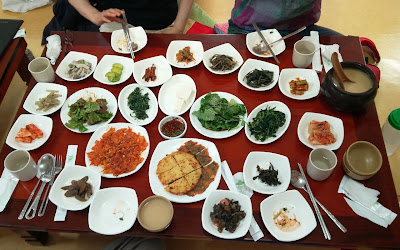 My Friday's are generally pretty easy, but due to a volunteer even the week before my morning schedule would be repeated in the afternoon.  Really not so bad since I only have one class in the morning, down side is that it's the last class of the day - causing me to have to stay at school until 5:20.  Thankfully Ray had no plans and was able to reschedule golf so after a day of sitting around we made our way to the screen golf place just down the street from my house.  To be completely honest I almost sent my dad along while I stayed home to nap - it's amazing how slow, rainy days can take it out of you. But, I sucked it up and went along with the game plan.  The last time I played I remember Ray telling me how good I was but i'm pretty sure that was just him being polite, I was sick and hadn't played in a while - but this time I was back on my game coming out only +10. While playing we ordered some Jimdalk, not your typical golfing meal/snack but delicious none the less. 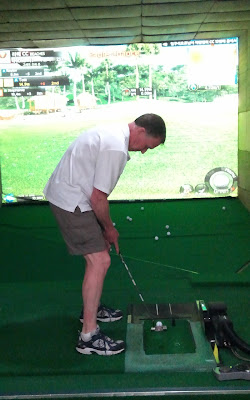 Just like that and the week was over, but there was still one task to be completed, summiting Mt. Guemosan - and my Dad was in luck, the next day called for clear skies and temperatures in the high 70's.