Let me just start with a warning - this will probably be really long, but trust me it'll be worth it. (Just like the rest of my posts).   Anyways, for those of you that were unaware (which should be no one),  my Dad came to visit last week!  I had originally thought i'd be stuck at school late on Friday but through a series of fortunate events I was able to sneak out early and meet him at the airport!

Incheon airport is basically floating in the ocean off the NW coast of South Korea so it took me almost all afternoon to get there, but oh was it good to see a familiar face.  As if 14+ hours of travel wasn't enough we started our venture with a 45 minute subway ride - welcome to Korea, Dad!  Being my fathers daughter I booked us a nice, cheap hostel in the heart of Seoul for the weekend.  My friend Sara had stayed there before so I trusted it'd be decent.  Aside from the fact that we couldn't find it and had to hike up an down a mountain of a hill 3 times [with luggage] I was pleased with the outcome. Friday night was on and off rain and we were both tired from our travels so we explored the nearby area and found ourselves at Namdaemun market (first check off my "to-see" list for the weekend). 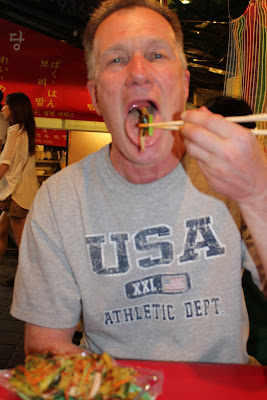 The next morning we were up early and made our way to the subway to start a day of exploration.  We ran into another guest from the hostel, Cliff, who was visiting Seoul while renewing his Chinese visa.  Turns out he was headed in the same direction as us so we combined and set out for Gyeongbukgung Palace "Palace greatly blessed by heaven", one of the main tourist attractions of Seoul, also world cultural heritage.  There really isn't much to say except that the pictures don't do justice for how massive, beautiful, ornate, and impressive this place was. 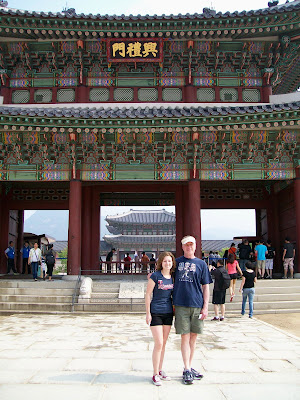 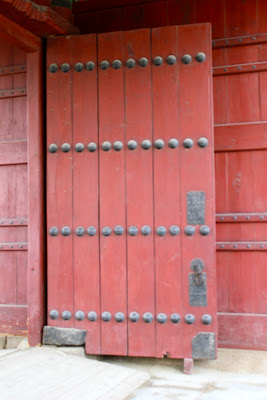 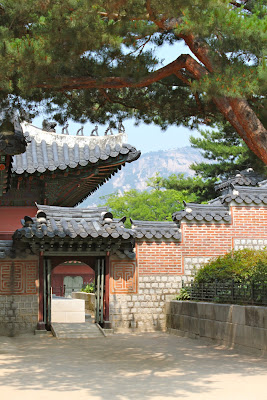 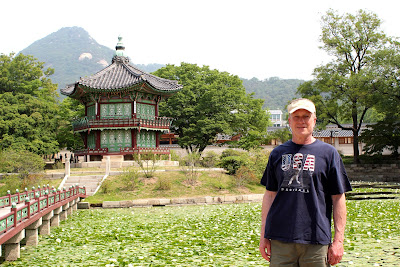 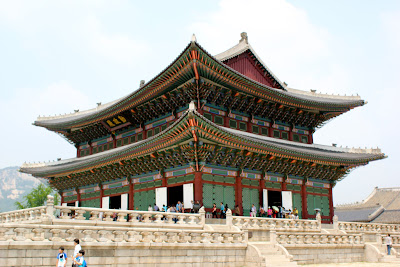 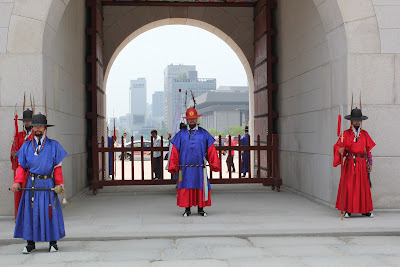 By the time we were done at the palace the only thing on my mind was food, I'm almost positive my exact words to my father were "My stomach is eating itself" and so our next stop/mission was food.  Clif had researched the area a little more than us that morning and said we weren't far from Insadong market so we headed that way.  With a few necessary stops on the way... 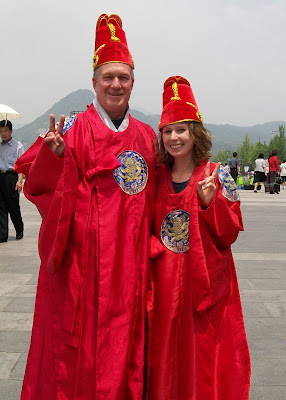 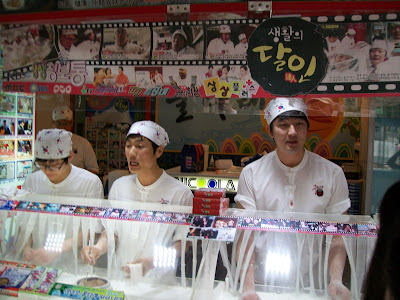 After lunch, a bit of touring around Insadong and buying royal candy from these guys ^^ we made our way to the Cheonggyecheon.  (If you read my blog regularly you'll know I had been there on my previous visit and deemed it worthy of a second trip).  But for those of you that don't read, it's a really long man made (re-made) stream with great views and a mini escape from the city. 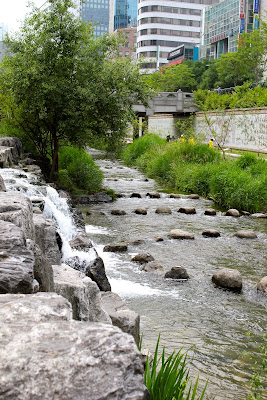 This is precisely why I said my dad would be the perfect visitor, if anywhere were to have come.  He'll eat anything I put in front of him and he'll walk to hell and back if I tell him to.  We really should have worn a pedometer to figure out our grand total distance for the past week, we had to have put on 5-10 miles in Seoul alone.  Next stop was the baseball game - LG Twins vs. Doosan Bears!  We made our way to line 2 to catch the subway basically halfway around the city.  I thought i'd be cute to get out one stop early and walk through Jamsil park - ehh it was a little farther than I estimated.. 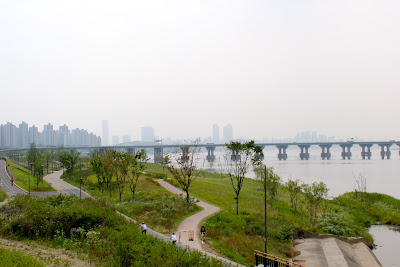 Although I went online to buy tickets about a week in advance we got stuck with bleacher seats. Really wasn't a problem except that they were PACKED, there had to have been more tickets sold than people there because there were people sitting on the stairs and along the back walkway.  Although there were many areas with single seats (like the one directly next to me, SCORE).  The game was a lot of fun, it's too bad we didn't know any of the cheers but it was fun just listening.  A lot more exciting than the games back home - the fans are totally into it, constantly cheering.  My co-teacher explained that each player has their theme song (similar to back home) but here they play for a good portion of the time the player is up to bat - and the fans have chants and songs to go along with them.  I decided we had to cheer for the Twins since I was sporting my MN Twins T and good thing we did because they pulled out a win! Since we had a big/late lunch we didn't fried chicken before the game (snack of choice at Korean Bball games) so we left around the 6th inning to track down some food.  Options were limited so we found ourselves at Burger King - and honestly I think I had my first ever (Jr.) Whopper - not a lie, had to come all the way to Korea to see what they're like. 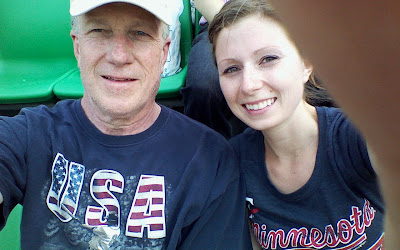 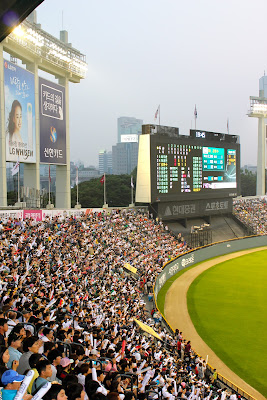 By the end of the game we were both ready for a cold shower and bed - note it was only like 8:30, but alas we still had a subway ride to an uphilll walk before that would happen.  Honestly, i'm proud of myself that I didn't pass out on the subway.  Once back the rest of the hostel (about 6 people) were gathered in the common area talking so I joined them for about an hour before heading to bed. Sunday morning we got another early start but this time decided to take advantage of the nearby sights. We made our way to Namsan tower - the large observatory tower of Seoul.  Clif said he had ran the road the night before without too much difficulty so we decided to talk it rather than pay for the cable car - the path was basically in the backyard of our hostel, so why not.  The walk up was basically just a never ending staircase but the views were beautiful. 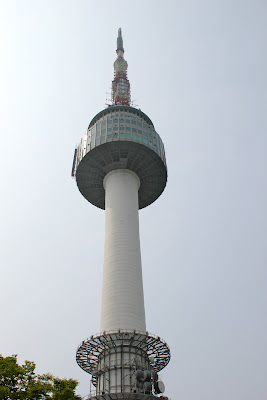 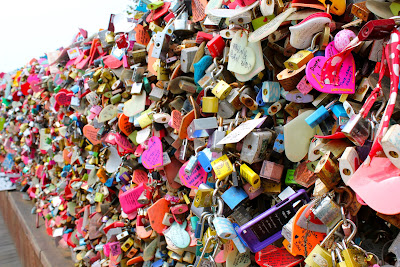 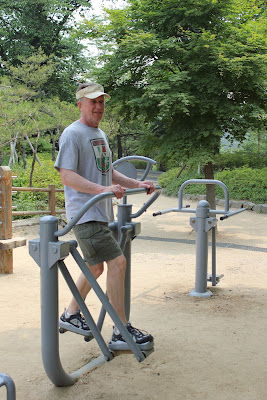 After the tower it was pretty much time to go home - we had a 3 hour bus journey ahead of us and with so much touring and traveling (for Dad) we were ready to call it a weekend.  We went back to the hostel, packed up our bags and made our way to the subway.  We made pretty good time and were in luck that a bus would be leaving for Gumi about 20 minutes from the time we arrived.  After a jam packed, rush here/rush there weekend in Seoul my Dad was in for quite the 180 in my little town of Buksam.
Posted by Unknown at 11:53 AM