I'm [already] three months into my contract in Andong, and the differences between this job and my last are pretty clear.  Gone are the days of desk warming and pretending to be busy between class periods, now replaced with jam packed schedules, one after the next.  There's days when I have no more than 20 minutes of break time between classes, but those are matched with days I only have to stick around for six hours instead of eight. 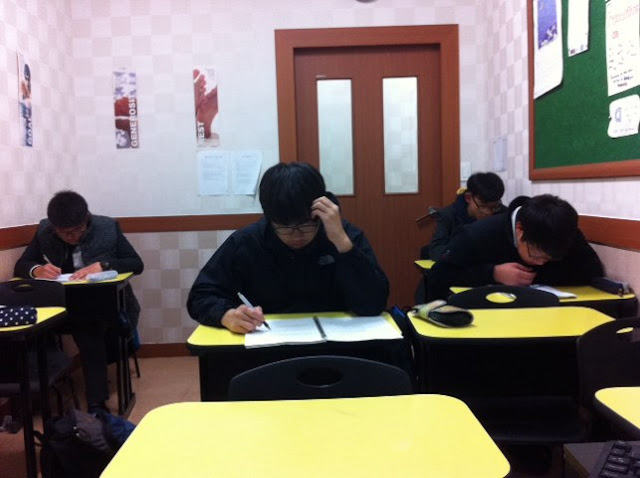 Coming into this contract I knew my experience would be a vast contrast to the life I was used to in Korea, and that's part of the reason I chose private versus public.  At least at a hagwon I wouldn't be able to directly compare my old school to the new, of course life was going to be different.  I was expecting all of these schedule changes, loss of a co-teacher, mixed classes and high work expectation, but there was one thing I overlooked. I completely ignored the fact that I'd be face to face with the students who are waist deep in Korea's education problem, overworked, under slept,  highly stressed kids - the youth of this country.

Teaching in public school I knew that my students were stressed and overworked, but what high schooler isn't? I remember days of studying, homework and essays and now watch my cousin in America complain about the same, it's something all high schoolers go through.  My old students had to stay at school until 10pm, but I also watched them sleep through classes, play with friends, and some days not actually study all that much.  At this hagwon though, the kids are 1) much younger and 2) serious about getting the work done.  These kids (or maybe their parents) are serious about their studies which means no time for screwing around, playing or sleeping. Basically what I'm trying to say is, working at a hagwon can be a little depressing.

So that's where I am, three months deep into a whole new culture shock experience.  Learning again what it's like to be a teacher, on some days playing babysitter, and ultimately trying to show these kids a little more than the ins and outs of the English language.  I can already feel bonds growing with some of them and hope to befriend more.  Of course their parents are paying for their education, loads of homework and robot production, but I'm hoping to give them a little bit more than that.

Posted by Unknown at 9:56 PM No comments: