Although it feels as if i've been here for at least a week or two, today marks only my 6th day in Korea. The days have been stuffed to the max with classes, food, meeting people, field trips - all of which is leading to information overload.

The flight was great - I was lucky enough to get a window seat with no one seated in the middle next to me. For the first few hours of the flight I didn't think the woman on the aisle spoke any English but at one point struck up a conversation inquiring as to why I was going to South Korea. She seemed pretty eager and excited for me and proceeded to tell me I would love it, the people are nice, the cities are great, there's tons to do here, and on and on.  Pretty much the same response i've gotten from many people.  The food on the plane was pretty good and I slept for a few hours (although I opted not to take the sleeping pills I bought since they advised us that those could result in a false positive for drugs on our medical exam).  After landing I met up with a group of about 5 EPIK teachers and we navigated our way to the EPIK desk.  Another 3 hours (by coach bus) and we arrived at the KT Human Resources Development Center.

Orientation so far has been great - met people from all parts of the US, UK, Ireland, Scotland, South Africa, Australia, and New Zealand.  The later being my roommate who was actually born in Korea and then moved with her family at a young age.  Aside from meeting people we get up every day around 7:30, head to breakfast (which always includes rice and soup) and it's off to class. The lectures are all very helpful in introducing us to Korean life, teaching and providing tips on how to survive the next year.  The most frustrating of the whole experience is the conflicting information provided.  That just shows though that no two experiences are alike and there is guaranteed to be some unexpected surprises along the way.  The other frustrating part is that we don't know where or who we'll be teaching at this point.  Some of the lectures are geared more for High schoolers while others focus on teaching Elementary.  Either way though all of the information is helpful and i'm sure it can be adapted for all ages.  Here's a pictures of some of the sights i've seen thus far... 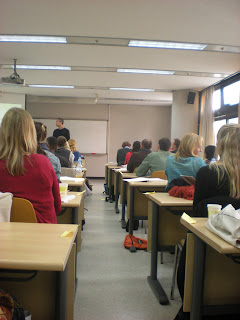 Some days I do find myself forgetting that I'm actually in South Korea since we've been so sequestered from the "real world" and surrounded by NET's (native english teachers).  I'm anxious to get my placement and move into my apartment, as stressful as I know it will be i'm ready for it to begin.

Aside from the classes I have had a chance to have some fun.  We went out to dinner a few nights ago - had some authentic seafood stew 해산물 스튜 and 매운 탕 fish soup. Clearly my idea of seafood was a bit off - baby octopus and what looks like brains were not expected. Everything was pretty tasty though - and yes I did try both of those mentioned.  I've also tried the Soju and honestly not the biggest fan - kind of tastes like rubbing alcohol, and yeah the beer is pretty pathetic. Maybe I should just quit drinking for the year?

We also had a field trip on Thursday to Chansaem Farm Village where we got to make bean curd (Tofu) , Dyed scarfs, played some traditional Korean games and made cell phone charms.  It was nice to get out and see more of Korea for the day however now instead of the "back in college" vibe I got to feel like an elementary school student.  I have not stood in so many lines and counted off to make sure people weren't missing in years.  The day was fun though and we got to learn some interesting history and culture.

I'm sure the next few days will fly by and before I know it i'll be getting dropped off at my new apartment wishing I was back in the comforts of this dorm.  I'm hoping to update soon but the promise of an internet connection after Tuesday is iffy.

Please comment and share any thoughts/questions you may have. Once I have an address I'll be sure to post it as I would LOVE to get letters/mail.

Can't say I miss home yet - but love you all! Sorry for the long post but hope you enjoy the pictures. 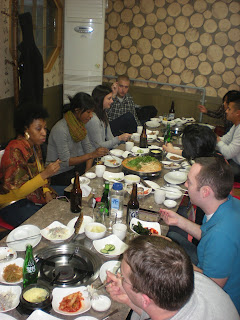