To cap off the end of the semester and beginning of summer break (well that's a lie because i'm the only one getting a break, the rest of the staff and students will be at school for the next month) we had a teachers "workshop" which seems to have been poorly translated cuz really it's was a field trip.  Thursday morning we had a half day at school, packed up the bus with loads of food, beer and of course soju and made our way to...? Yeah, I had no idea where we were going or what we would be doing.  I tried to get some more information but this is all I came away with:


Me: "So what are we doing to do on this trip?"
Math Teacher: "Oh probably drink, and eat, but mostly just drink"
Me: "Well what else, like activities"
Math Teacher: "Maybe cards or some games, but we will drink"

Me: "Is there anything special I should bring for the trip?"
Co-T: "The school uniform for a picture, and extra clothes the boys will probably throw you in the water"

Well okay then, bring clothes and my liver...got it.  I did get a copy of the itinerary but it was in Korean and google translate was no help at all.  I should also note my main co-teacher would not be making the trip do to being ready to burst (8 1/2 months pregnant) so some of the other teachers told me they were worried for me, who would I talk to?  Umm did they forget we have like 8 English teachers at our school and the principal LOVES practicing his English with me.

Okay back to the trip - so we boarded the bus around noon and were immediately handed a goodie bag of snacks for the road, including a piping hot rice cake and some dried squid - gee THANKS!  We stopped for lunch after about an hour and then continued until we wound up at some park, which I failed to catch the name of, in myeongdong for some hiking (oops only wore my sandals).  Thankfully it was more of a walk and for the most part along a paved pathway.  Not really sure how long it took but I was able to chat with a few different teachers and the principal along the way - the area was really beautiful so of course we stopped for a few photo ops.  When we arrived at the end we had to wait in line for the boat we'd be taking back to the bus - I stopped in the bathroom and on the way out was greeted by a friendly [drunk] old man, "Hi, I uhh I Love you"  Yeah, thanks dude see ya later, or so I thought. He proceeded to follow me back to where the rest of my group was waiting.  A few noticed and motioned me over while telling this guy to get lost but he wasn't really interested.  He lingered and waved, and starred, and continued to tell me how much he loved me. Thankfully I was able to cut in line and get on the next boat, see ya never creepy old man. 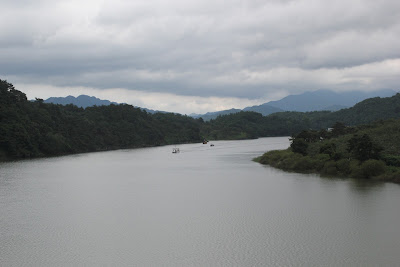 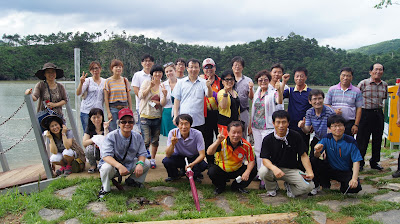 So back on the bus I see the principal start walking down the aisle with the soju bottle asking people what they were having for dinner. Apparently if you picked the wrong answer you got a shot of soju, I knew that regardless of what I said I'd wind up with the soju - he just likes me that much. And I was right, I got not one but TWO soju shots - lucky me!  I'm not sure how much i've talked about soju but it honestly tastes like rubbing alcohol, not sure how anyone could claim to like the taste of it.  Not much longer and we arrived at the pension where we'd be staying for the night and got settled into our rooms.  There was some time before dinner so I went down to watch some of the male teachers play "foot volleyball" really there is no explanation needed - it's played just like it sounds. 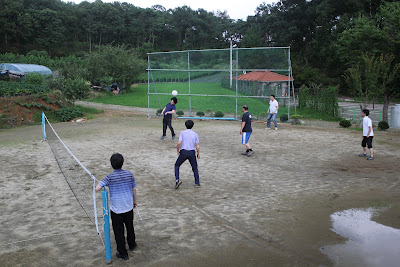 Dinner was served and the drinks were soon to follow, I was scarred that I wound up at the boring table as not one of the women touched the beer or soju bottle sitting on it, but that soon changed. 류현정, one of my quieter co-teachers was soon playing bartender whipping up a tasty soju, cider (sprite) and beer combo.  We wanted to share with the principal so I offered to deliver it to him, of coures that doesn't come without getting something in return so he insisted I have one as well, taken "Korean love shot" style arm-in-arm with him.  Needless to say the room erupted in cheers and laughter.  Teachers started trickling out but I opted to stay and drink with the principal and the fun group. After more beer, soju and quality konglish conversations we made our way to the basement for Noraebang. 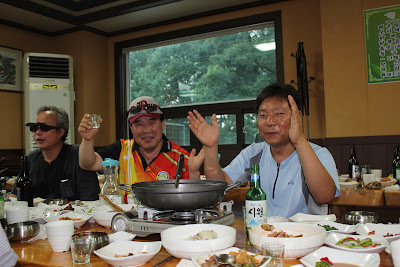 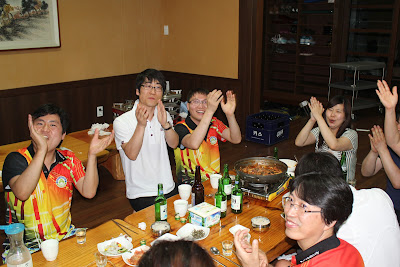 No party is complete without drama, right?  For some reason the principal was mad at 최태만 (special ed)  and 윤종태 (gym teacher) who had organized the whole trip so they left.  I wasn't really having the noraebang and felt bad they weren't enjoying it so I went off to find them (knowing neither could speak much English).  Ah, also important here 최태만 is the one who was supposedly going to throw me in the water - sooo my intelligent drunk self thought it'd be a great idea to suggest swimming!  They didn't take me seriously seeing as the staff had only began filling the pool as we arrived, and at that point only the hot tub was full (with freezing cold hose water), but I was determined to make them crack a smile.  I changed into my suit, grabbed a bottle of soju from the noraebang and headed to the pool.  윤종태 was the first in and immediate came out screaming and shivering, I was defintely having second thoughts about this but couldn't back out at that point so in I went. That's probably as close as i'll even get to the polar plunge but holy balls it was cold. We didn't exactly swim as much as we jumped in and out screaming, shivering but most importantly laughing and having a great time.  I guess our laughter rubbed off because there were soon other teachers joining in on the fun (or to my friend Loudine's theory they came because I was in a bikini).  Eventually I decided to shower and when I came back down it was snack time,  no pizza here - Korea goes big, they were firing up the grills for some samgypsal.  Another bonus to drinking - it gave all my teachers liquid courage to talk to me!  My vice principal and the gym teacher, who avoid me like the plague were both chatty - now if only they would continue to talk to me at school! Anyway I decided to call it a night when the principal decided to start shouting at people again, I guess he has a bit of a temper when he's drinking. 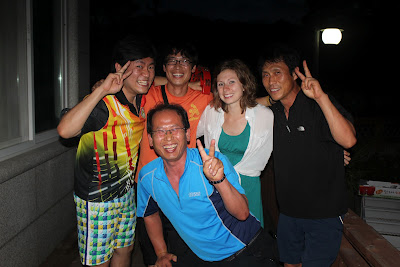 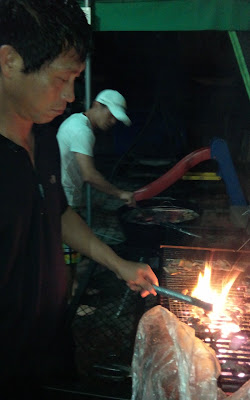 Thankfully I made the right decision in taking a drunk shower around midnight because the next morning there were about 15 women in our room sharing one bathroom.  I was in and out of sleep as the rest of the ladies got ready, rising at the last minute (7am) to dress and head to breakfast.  Snail soup and rice - mmm just what I wanted! Oh and you can't forget the "hangover vitamins" that the school nurse was handing out by the handfuls, haha just shows that everyone had a good night. After breakfast we boarded the bus on our way to yet another mystery destination. 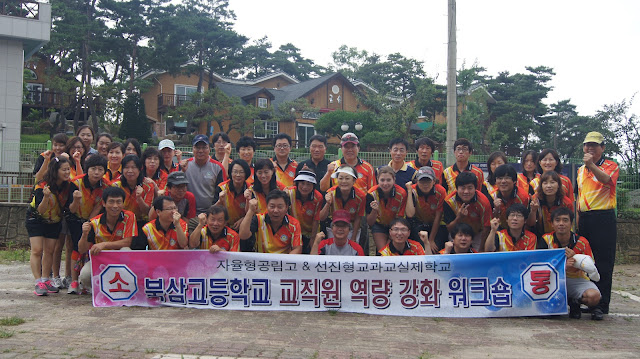 More fun on the bus, did I mention I was in the last row?  Not good for those apt to motion sickness, combined with heat, tiredness and slightly hungover - the rest of my teachers are lucky I didn't puke. We soon arrived at Jungwon University. The campus was pretty impressive, golf course, swimming pool, mountain climbing area, kind of made me want to be in college again. We listened to a lecture / I tried to sleep since I couldn't understand anything, toured the random museum that was on campus and then made our way to our next stop. We soon arrived at Songnisan National park and once again embarked on a walk.  At this point I was tired and hungry and had no idea where this was leading too or how long we'd be walking.  We passed a few restaurants and convenience stores with no end in site, but about 30 minutes late we arrived at a restaurant and actually stopped for lunch. Bibimbap and Pajeon - two of my favorites, made up for the lousy breakfast.  We had a half hour to kill before the bus was scheduled to take us home so I wandered the area with a few other English teachers, saw a temple, met some adorable dogs and sat by the river. 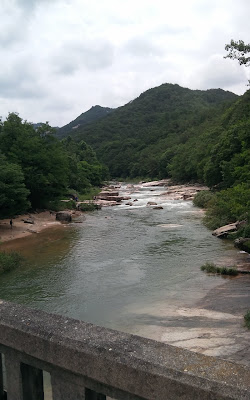 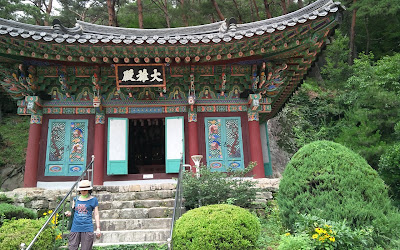 Since living in Korea there are two things that I wish I could master. 1. The ability to teleport, clearly a bit unrealistic, but after the long weekends of travel I would give anything to be able to magically transport back to my bed.  Since this isn't going to happen i'd like the ability to sleep on buses/trains, doesn't matter how tired I am it seems that I can never get comfortable enough to actually fall asleep. Two hot, uncomfortable hours of a bus ride later we arrived back at Buksam high school.

Before leaving for the field trip I came across multiple facebook and blog posts about people's apathetic and negative feelings regarding their school outings.  I also had friends wishing me luck and feeling sorry for me that I had to go.  Maybe it's that other people have terrible teachers and staff but I thoroughly enjoyed myself on this trip and i'm glad I went. Now here's to hoping that the teachers will continue to talk to me back at school - maybe i'll have to feed them soju at lunch!