Grinning from Ear to Ear

Okay so i'm not even one week into the new school year but I'm in love. If this were my first year in Korea you could argue that i'm in my honeymoon stage where everything is new and exciting and fun - but I've been here for a year, I know the ropes, I get it.  Next week my classes might suck, stare at me with ubber confusion thus making me want to pull my hair out, but let's focus on the present...

This post is just going to be some ramblings about how much I love some of the special people in my life, so if you don't want to hear it move along. **Update - after I wrote this it turned into a novel, and there's not many pictures -don't say I didn't warn you**

Obviously if I'm writing about the people I love I couldn't not mention my second grade boys. Okay so they're in third grade now but I'll always remember them as my second graders, they're my boys and if you don't understand what I mean just keep reading. If you haven't been following along, I don't teach third grade, which gave me some apprehension about resigning my contract "Would I ever see those students again?" (Third graders [seniors] here are ridiculously busy preparing for the SAT), but my boys promised they would still come visit me. 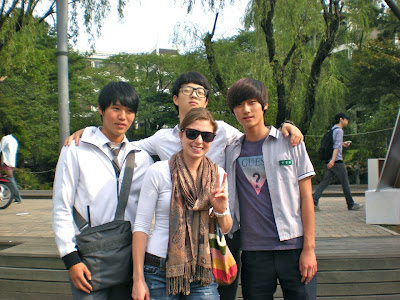 After a brief encounter on Monday with 장의 and 진화 receiving a "See you tomorrow" I was a bit worried, but then Tuesday happened: I ran into the boys after lunch and they were more than  happy to see me, especially 민도 who I may or may not have promised to marry in 5 years (he's not forgetting that anytime soon).  So we're hanging out on the playground talking about the new school year, 3rd grade, winter break and of course how they want to visit my house again. I mentioned going back to school for my  masters and i'm pretty sure 영욱 asked me to go to University with them.  At one point 민도 mentions Stephanie is my wife to which 진와 replies no she's my angel, get away! This was also the same day that 민도  told me that I am the best foreign teacher ever.  As lunch was ending and we were heading back inside 진화 asked me "Teacher, who is your best student friend here - us right?" I had to laugh a little, do they really  need to ask?

Wednesday I was watching the new second grade boys playing soccer and briefly said hi to a few on the sidelines. Minutes later my boys showed up and yelled "oooh Stephanie no! 가자."  I made my way over towards them and immediately 장희 scolds me "Teacher we are disappointed in  you! *confused* you were talking to the second graders, don't do that! You are ours!" Normally I wouldn't enjoy being owned by someone but coming from these students it was a bit endearing.  They said we will be lunch time friends since i'm not their teacher anymore so I have to spend time with only them, just talking. love

Thankfully my new second grade boys are stepping up and filling the shoes that were left behind. For the first day of classes I've been having the students make name cards with their birthdays (want to try and acknowledge as many as I can this year - hoping they'll return the favor).  In my first second grade class I noticed 송석호 had written his phone number as well, pointing to it he said "Teacher for you, message me" I couldn't help but laugh and just nod my head as I continued through the class. This is the same boy who on his speaking test last Fall said the only thing on his bucket list was to hang out with me.... Then there's his friend 김민소 who came up to me yesterday with the following, "Hi Stephanie! Umm sorry, I can't speak English well but I want to talk with you more - so I will study extra hard! Just for you! Okay see you later".  This one made my day, hearing that i'm the reason a student wants to learn (even if only to talk to flirt with their foreign teacher) reminded me why i'm here.  And to wrap it all up there's 연의잔, one of my advanced students who suddenly is talking to me a lot more, after getting quiet last year. In our first class he told me I need to practice my Korean with me - he will be my teacher, "Just call me 산상님" I hope he knows i'm going to take him up on this offer.  He also has asked me a few times why I don't have a boyfriend. "But teacher, you are beautiful - I think it is very easy, you can just go on the street and pick anyone!" oh if only it were that easy...

Fortunately these boys aren't the only ones making me smile this week. My co-teacher 이혜진 is like a present from above - she's be more than helpful with getting the school year started, and despite having a cold and fever completely on top of things (typically unheard of in Korea).  I know she really cares about me and wants to make sure i'm comfortable here. Last week I asked her about the possibility of moving to a larger apartment and after she found out it was too late because they had already renewed the lease on my current place she felt terrible insisting to take me out for coffee as her way of making it up to me. Honestly, it was probably my fault for not asking sooner but I was touched that she cared.

All the teachers this year, new and old seem to be a bit more welcoming to my presence. Of course there is still the look of fear in their eyes as I pick the seat next to them in the lunch room I know i'm really intimidating, but most of them make an attempt to say hi or at least offer a smile. The new technology teacher, 지주연 took over as the youngest teacher in the school (a title I previously held) and surprised me with her English ability, asking that we become close friends this year :)  One of my new co-teachers approached me after class to tell me what a great teacher I am, "I've seen other foreign teachers but I think you are the best" (uhhh really? Thanks!) She also asked that we eat lunch together every Wednesday after our class. Yes, don't have to sit awkwardly silent alone at lunch!

I hope I give off the same vibe that I get from some of my teachers of really wishing I could speak to them, there are a few that I can tell genuinely want to talk to me, but our conversations seem to hit a road block.  One such teacher is 박민석 who has a smile that could cheer up anyone's day, and now sits kiddy corner to my desk after our office got an overhaul.  I'm gonna go study Korean just so I can talk to him more - seems like an awesome guy.

As if this new in school behavior isn't enough, the fun has continued after school. Last night I had dinner with 9 other teachers, something I both enjoy and dread at the same time. 임동형 invited me to the dinner (still not sure why), her English is okay but she really tries and was my only hope for conversation at this dinner. As we sat down I realized this was going to be one of those long awkward events where I just sit there pretending to know what's going on as everyone speaks Korean. Although I could understand some of what they were saying my vocabulary and shyness prevented me from adding anything to the conversation. But then my vice principal, one of the shyest guys around brought me into the conversation! His English is far beyond what he lets on but he's finally opening up and showing it! (Oh yeah and he's also concerned about my love life - said he'd set me up with a nice Korean man, maybe the math teacher?) Although it was only for a portion of the dinner I could not have been happier, we had a broken English/Korean/Body language conversation among all 9 of us, and it made.my.day. 감사함니다 교곰!