The crisp air, delayed rise and early fall of the sun, leaves changing and falling can only mean one thing. You're probably thinking fall has arrived but that's not exactly what i'm talking about.  In Korea, the dropping of temperatures and changing of leaves reminds students, parents and teachers of one thing - D-day.  If you remember, I already wrote about this infamous day last year so you can get most of the details there.  This time around however, I had a bit of a different experience so I wanted to give it another go.  Now that i'm a veteran teacher the intensity of this day hit a little bit closer to home, last year I didn't know any of the 3rd grade students; I never got the chance to teach any of them let alone have a conversation with them.  This year it was a bit different, some of my favorite students and the reason I decided to stay for a second year, were among those preparing for the exam. 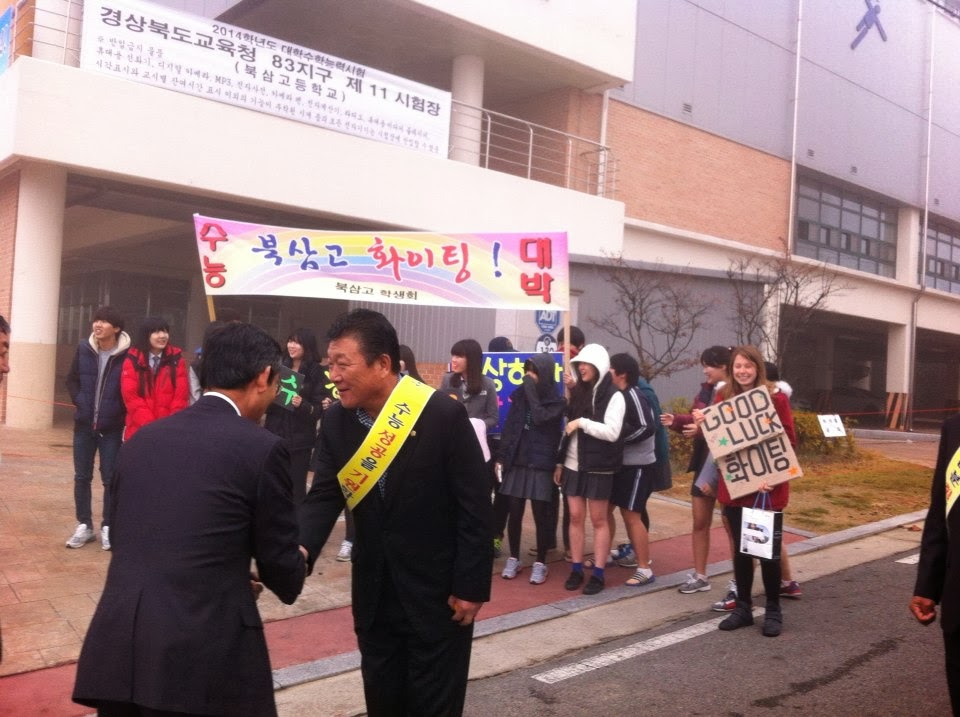 In recent weeks I could see the stress building and dark circles growing under their eyes, as the 3rd graders turned into mere shadows amongst the hallways of our high school.  There was no longer time to talk during lunch, instead it was back to the classroom to study. When I finally got the chance to talk to some of my boys about the test they insisted I come cheer for them at the school gates before hand.  I mentioned this to Anna (one of my co-teachers) and she explained how this has become sort of a thing with teachers, parents and younger students showing up to support their classmates.  I told Loudine she was going with me at 7:30 Thursday to cheer on my students, to which she responded "So by us you mean...."


Not only were my students taking the exam this year but our school was also designated as one of the testing locations, one of the 1,257 across the Nation.  I guess this was a good thing for me because it meant no classes on Wednesday and a shortened schedule on Tuesday.  All of these time changes were in order to ensure the school was impeccably clean and ready for test day.  Classrooms and offices were cleaned from top to bottom, desks were arranged just right, and posters had to be removed from walls and doors.  Yesterday the students were let go after lunch leaving the teachers to deal with the finishing touches of preparing the school, while the test takers went to retrieve their test ticket for the next day.

Before the students left for the day I had the chance to meet with some of my third grade boys and wish them well on the exam.  I could feel the stress radiating off of them but told them "Don't worry you're almost done".  I was a bit surprised when 민도 replied with "No teacher we are just starting" I must have had a weird look on my face because he followed with "Tomorrow is the first day of the rest of our lives".  Talk about pressure. 창희 was talking to 고병진 our "Brain master" practicing deep breathing and visualizing himself taking the test.  Honestly out of all my students I think he was most serious about it and likely the most worried.  At one point he asked me if I'm religious followed with "Anyway, will you pray for me tomorrow".  헐 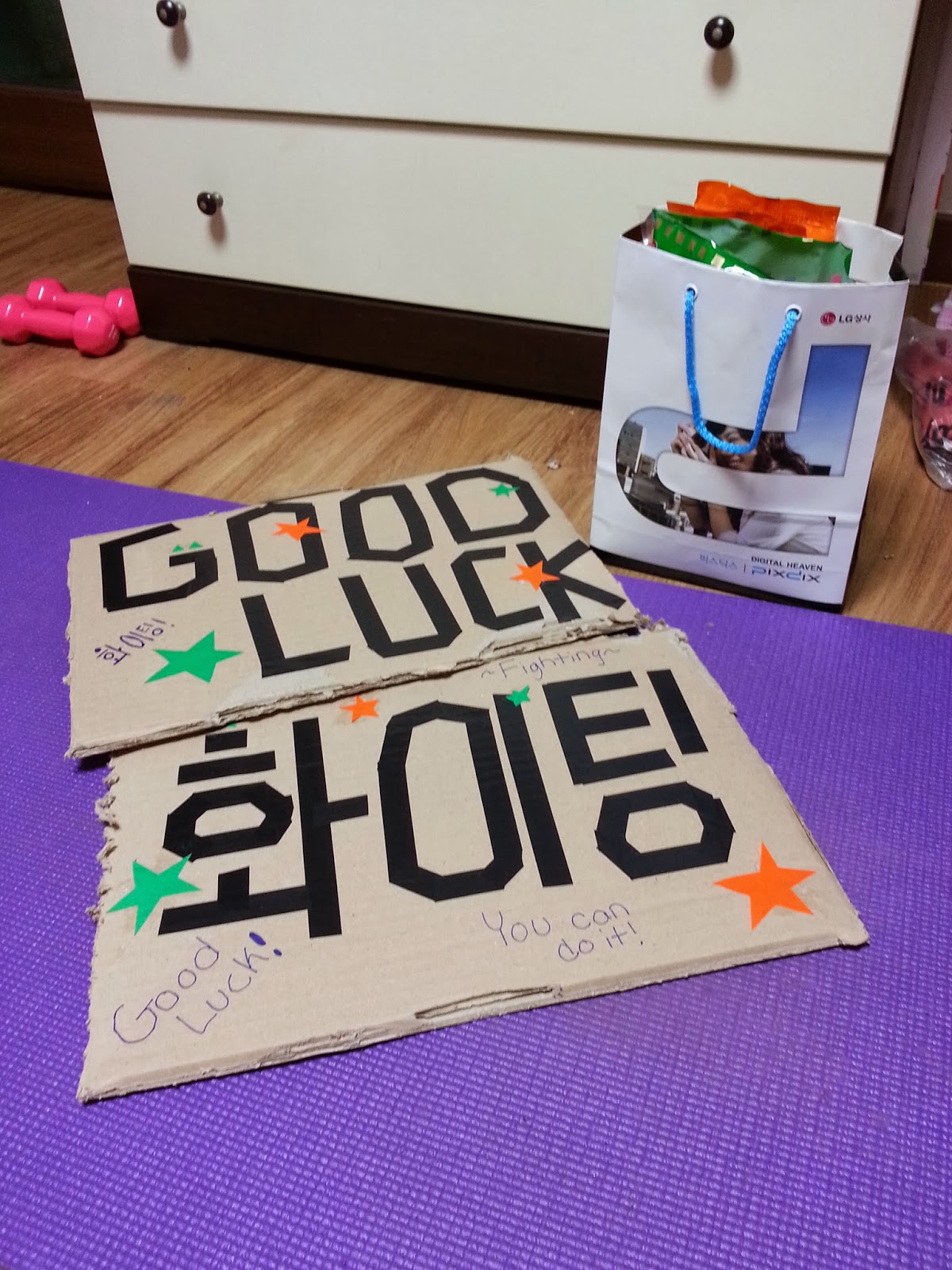 I'm pretty sure my students didn't believe I would actually show up to cheer them on, after all I had the day off of school and the students were planning to arrive between seven and eight AM.  Yesterday 창희 told me "Don't worry about it, you don't have to come for me, and then 진화 followed with "If you are awake early then come, otherwise it's okay", at which point I decided I was going.  Loudine, being the awesome friend that she is said she'd join as long as I promised to scooter her there and back, she even baked cookies!  I threw together some "Fighting" and "Good Luck" signs, picked up the candy the boys requested and went to bed (in clothes acceptable enough to rock early the next morning).

I actually had no problem getting out of bed when my alarm went off at 6:45, I think it was a mix of both excitement and nerves (for my students).  The morning weather was less than ideal with a thick blanket of haze providing limited visibility on my ride over to Loudine's.  I knew there were strict traffic rules imposed on the day of the exam so I wasn't very surprised to see multiple police cars lining the streets leading to my school.  We parked the scooter and headed towards the crowd of students and teachers already lined up outside the front gates. The first half of the crowd consisted of students and teachers from other schools whom all seemed to stare at the foreigners as if we were lost little children, one guy actually asked us "Where are you going?" umm here... we fended him off with a few cookies, took tangerines in return and made our way towards the Buksam crowd.  I think everyone was a bit surprised but equally as excited to see us. As the haze began to lift students began to trickle in, all of whom looked as if they were taking their final steps before entering death row, I kid you not. We stood patiently in the cold, thick air, waiting for the Buksam kids to arrive so we could shout our best lines of encouragement and give them their fill of treats.  Aside from the goodies Loudine and I brought, other teachers and parents were equipped with tangerines, chocolate, tea and coffee; one thing was for sure these kids would not go hungary during the test period.

Although my boys told me they'd arrive at 7:20 it was closer to 7:45 before I caught sight of any of them.  Most of the students seemed to be in bee line walk to the door with tunnel vision / blinders on.  Parents were actually chasing them down or blocking their way so they could had out candy and give hugs before sending them on their way.  I got the chance to see many of my former students, gave them their treats and a few last wishes of encouragement.  Shortly after 창희 arrived the rain started to fall and Loudine and I decided it was time to go.  Although there was still another 30 minutes before the official start of the test I wasn't about to stand around in a downpour.  Although the students all seemed to be in a bit of a haze and may not remember my being there i'm pretty sure Loudine and I scored some major brownie points with our staff (her principal was actually among the cheering crowd as well) who definitely noticed our attendance. 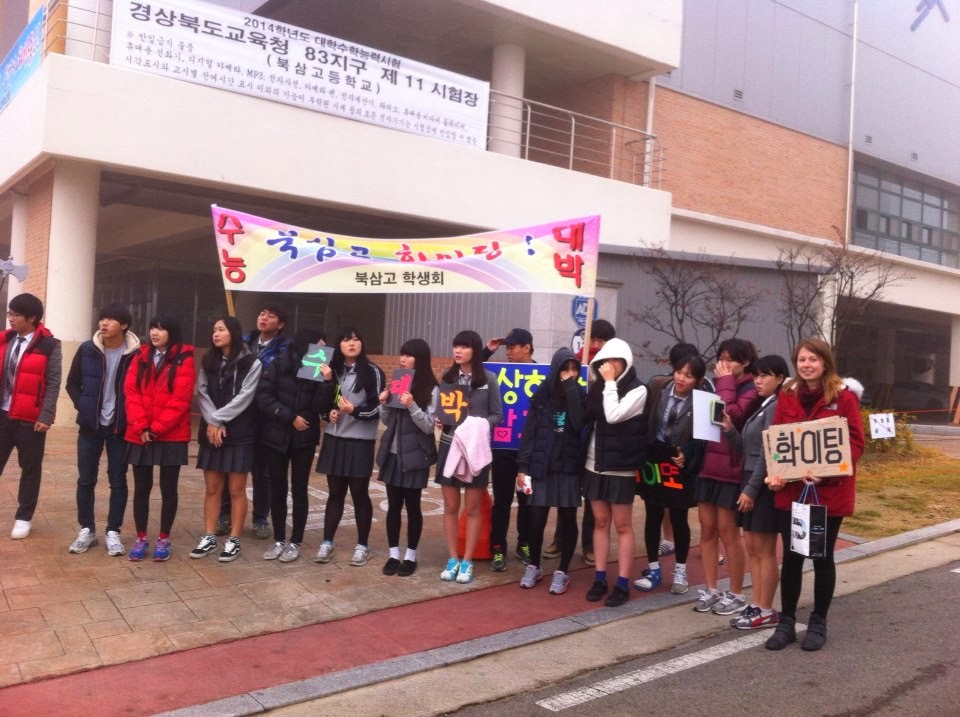 As we got back on my scooter to head home the rain really started to come down, I actually thought we might blow away as we rounded the corner for Loudine's house.  By the time I was home my jacket and leggings were soaked but thankfully I had the time to crawl back into bed and warm up.  It's somewhat unbelievable that as I sit here writing this there are thousands of students, 650,000 to be exact, just settling down for the listening portion of the English exam.  As the day goes on and I enjoy my freedom I will keep my students in the back of my mind, wishing them success and good luck for the rest of their lives.
Posted by Stephanie at 1:18 PM