After our adventure on Thursday I agreed to tag along with Grant and a hiking group on Saturday - destination Beishi Stream Historical trail which would connect us to Wantan trail and Pingxi/Xiangliao trail.  The total time was estimated to be between 7-8 hours of hiking but there was promises of ending at a beach for swimming and seafood so I was sold.

It was another rushed morning, partly due to the fact that I didn't set an alarm and was woken about 5 minutes before we had to leave, but soon enough we were on the platform waiting for our train. The only problem being that we weren't 100% positive the rest of the hiking group was there with us.  The train was longer/slower than expected but I spent the time eating my bagel (with mystery filling) and coffee from 7/11.  Once we got to Shuangtai station we met up with the rest of our group, bought some more food for the hike and hopped in taxis which would take us to the start of the hike.  I met a few people from the group including the leader YiRu who told me that I look European when I asked why she said "well you're not fat" - Grant actually had a similar reaction when I told him I was from Wisconsin, as did one of his friends - woo hoo  go USA.  The taxi ride up the mountain nearly caused me to lose my breakfast but I managed to keep it down. 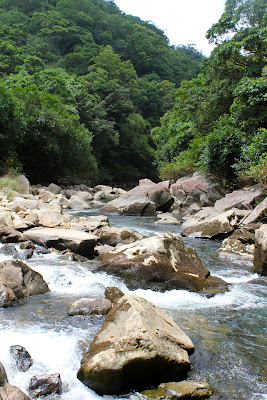 The group was about 12 people in total so we had to slipt up into 3 taxis, once we all arrived we began the adventure, realizing that we were off to a late start and would have to keep a steady pace if we were still hoping to make the beach before sunset.  The first part of the hike (well all of it really) was beautiful, winding alongside a bright blue stream where before long we were stopping to swim 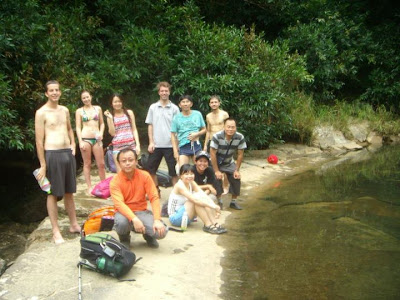 After our swim and a few? more hours the rain began - at first it wasn't much of a problem considering we were under the cover of the forest but it gradually began to pick up.  I was glad that I decided not to put clothes on after swimming - even if I did look ridiculous in my swimsuit and tennis shoes combo.  As the rain came down harder other busted out their ponchos and umbrellas while Grant and I just looked like the silly foreigners, dripping wet.  At one point one of the guys from the group came across some huge leaves which a few of us a used as a natural umbrella - actually worked pretty good!  We made a pit stop at a small temple area where we were able to escape the rain, use the bathroom and eat our delicious lunch box. 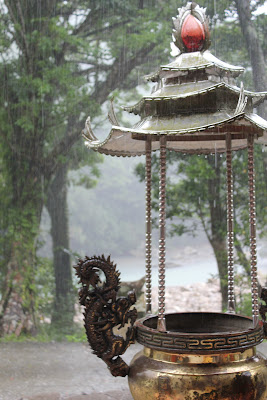 A little while after leaving the shelter area the rain cleared up and I decided to ditch my umbrella, as I did so I told Grant i'd probably need it again soon but it was a bit of a pain to carry.  Plus YuRi said the stem held poison so we shouldn't touch it, uh okay? (Whatever i'm still alive aren't I?).  After hiking a bit longer, crossing some sketchy bridges, and navigating our way through rocks and sticks the clouds opened up again, this time no umbrella in sight - ah but wait, another shelter area!  Sometimes I don't mind being the "stupid Americans" because you can play dumb or bend the rules - I mean play along to the stereotype.  Anyways, this time it meant Grant snatching an unclaimed poncho from one of the tables for me. 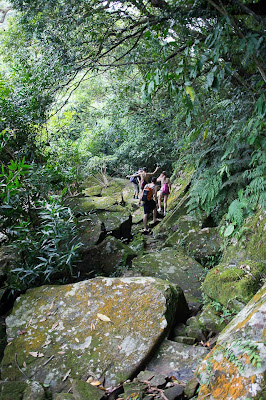 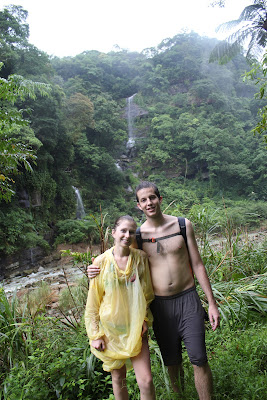 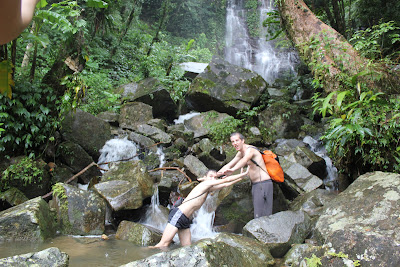 It's probably a good thing that I didn't wear a watch this day and that i'm so easygoing.  I think this trip was proof that i'll roll with whatever comes my way.  Grant asked me a few times if there was anything that bothered me or that I wouldn't do.  I'm sure there are some things but honestly I had some trouble coming up with them - I'll eat ANYTHING, willing to try whatever and am usually up for a challenge.  A few times during the rain Grant asked if I was okay to keep going or how I was doing - there's really only one answer - good, I mean what were my options, keep going or sit there in the woods alone.  Anyway as we came to an opening and saw turtle island in the distnace my heart sank a little.  I knew our destination was the beach, and as you can see in the pictures below that was still far off in the distance.  Maybe noting my lack of enthusiasm Grant assured me that we'd be there in no time. Yeah, sure.... 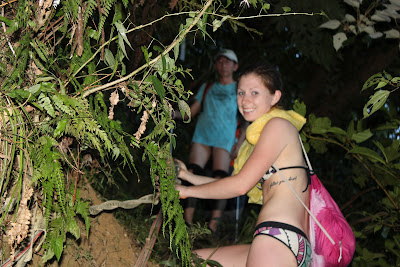 After being told that we had two hours left (or more) I was starting to wear down.  It wasn't so much that I was tired but I think the fact that I could sense we weren't really sure where we were going, oh and I had to pee. I was about to find a bush to squat behind (not like it'd be the first time) but then we came upon a small snack shop complete with ice cream and bathrooms!  I think this pit stop may have saved me because I could sense I was getting a bit cranky. 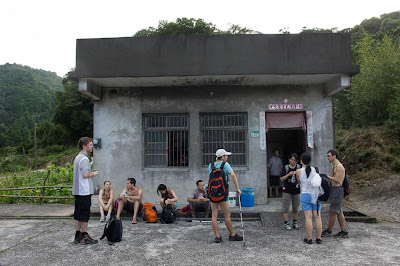 After the break we continued to hike, this time on a much wider path with a beautiful forest surrounding us.  Then on to a road, some hills, another road, then a path, and on and on we went.  There were a few points we met forks in the road but with the assistance of a GPS we chose a route and carried on. By the time it was nearly dark, and we were clearly no where near the beach, Grant and I were adamant  to continue on our path as we could see buildings and lights in the distance (although it was also turning inland from the beach).  The rest of the group almost decided to turn back and try the other fork in the road, but soon came to their senses and realized that was a retarded idea.  Not much longer and we came upon a long driveway with a silly looking ticket booth deal.  Everything was in Chinese but I was told that it was a winery - huzzah, we have been saved!  Talk about turning a frown upside down, sour grapes into wine. Idk what is that saying? Is there one? The group almost kept going since the sign said they closed at 6pm but I wasn't about to venture into the dark when there was wine waiting for me.  One of the girls from our group buzzed the office on the intercom and explained our situation.  Soon we were in the tasting room, about to make the best purchase of the day while waiting for the staff to drive us to the train station fo free!

I may have been getting a bit cranky and we did miss the beach and seafood but to be honestly i'm totally happy with the way this trip turned out.  It's definitely more of a story then, we hiked and went to the beach, and plus I got to drink some good wine! The group thought we were a bit crazy when we started drinking in the waiting area at the train station, but hey - we're just the dumb Americans right? 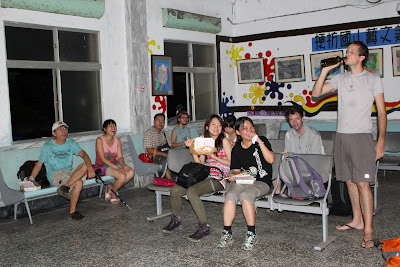