Summer break, what's that?  Oh right at home it's when teachers AND students get close to three months off of school to relax - you know the time that it's totally acceptable to stay up until like 4am for no reason what-so-ever just to sleep until 2pm the next day. Sleepoever marathons, Summerfest, all day pool parties, obnoxiously too may Kopps runs, and who could forget those awesome summer jobs.  As wasteful as some of my high school summer days have been I wouldn't trade them for anything.


Well in Korea summer break is a bit different, officially mine starts next Wednesday at which time I'll be hoping on a plain to Taiwan! (Okay there are some perks to the summer break over here), but back to the negatives.  8 days plus the weekend gives me a whopping 12 days of break.  School ended on July 19th but for the past two weeks I have been teaching summer camp, basically a pointless class that my school created just so that I would have something to do since my contract says I have to.  But that's just me, the students don't really have much of a choice - I'd say at least 75% of my students have been there every day.  The only difference i've noted is that they're aloud to keep their cell phones with them  and they seem to sleep more (I guess the teachers understand they need a break in the 90 degree + classrooms [mine has A/C - thank god]).

Understanding that neither I nor the students really wanted to do much work over the summer I decided to theme my week of class (1 week for first grade and the next for 2nd) around the London 2012 olympics.  I planned a few different activities, lots of you tube clips, speaking practice and of course a movie to cap off the week. In reality I have it made at my school, camp for two hours a day and not expected to be there except for the half hour before and after my class.  Other EPIK teachers either have to teach all day, have saturday classes or the really lucky ones get to desk warm for two weeks.  Might not sound that bad but there is only so much mindless sitting in front of a computer that one can do.  I for one am thankful that my school didn't force me to be a mindless robot for the a.m. portion of the last two weeks (my yoga practice thanks them as well). 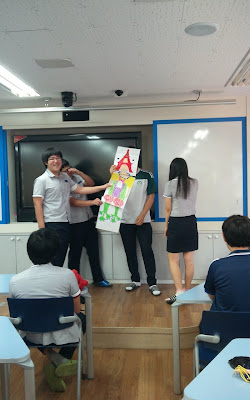 I started the week off with a brief intro and overview of the olympics, ending class with a whole bunch of work time.  The kids were responsible for creating a new olympic poster or mascot, picking whatever country they desired (except Korea).  I wasn't sure how creative my kids would get but some of them sure blew me away.  The kids presenting ^^ were some of my 1st graders and probably the most creative of the two weeks.  Paris was their country (obviously) with an Eiffel tower head, royal family themed clothing and flog legs (cuz duh that's what they eat there).  I aslo got a US themed cheeseburger, really cute panda, and a mouse for Switzerland (swiss cheese, duh!).

The next day I hd the kids create new olympic events, to be played in class the next day.  This was a great idea and awesome use of class time (meaning it sucked up a lot of time with minimal effort on my behalf).  Biggest problem was that the girls fear the sun like it's an axe murderer so the kids were a bit apathetic at going outside - I bribed them with water balloons.

Seeing as I"m the coolest teacher to ever exist (probably an exaggeration) I ended the week with ice cream and movies.  Well it sounded good in theory at least.... we did a home made ice cream activity but most of the kids didn't understand the concept of quickly so they had more of milkshakes and the subtitles for the movie ended halfway through.  I think by the end of the period there were about 2 kids still awake, oh well nap time works too. 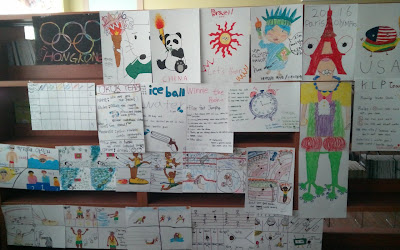 With one week under my belt I figured the next would glide by with ease, and that was true for the most part. It might have also helped that my class was this time only 14 students - 3 of which were my star students aka the boys that are in love with me.  Usually these boys love talking but put in minimal effort when asked to do something, thankfully their attitudes changed this week and they did almost all that was asked of them. 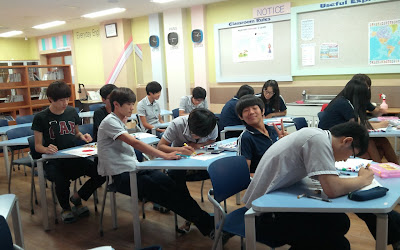 I knew the boys wouldn't even consider going outside in the heat to play games so I changed it up a bit.  I told them to create an event we could do in the classroom - they looked at me like I was asking them to design a new spaceship. Since I only had three teams I knew i'd need to invent some more games to take up the two hours and thankfully I was successful.  "Teacher, yesterday very funny!"  (Yeah, they mean fun). 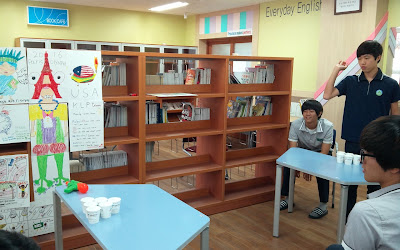 After the fiasco of the week before I made sure to have new subtitles for my movie, which did I mention was Cool Runnings? I don't think the students were as excited about it as I was...  So I found some new subtitles, scratched the ice cream making and armed myself with microwave popcorn.  Well, it went better than week one but the subtitles were slower than the movie so I was constantly FF them, still I think the students enjoyed. 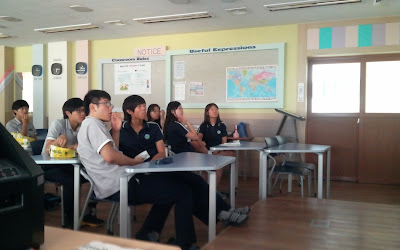 Summer camp, success - now give me my vacation!

Posted by Stephanie at 4:58 PM