Twice now in my travels I've been lucky enough to coordinate plans with major festivals, hopefully a trend that will continue in the future. Last time it was Koninginnedag while visiting one of my best friends in the Netherlands, this time it was Thaipusam in Malaysia. I did a little bit of research before leaving Korea and found that the festival is celebrated at the Batu Caves just north of Kuala Lumpur, hence the reason I left KL until the tail end of my trip. Thaipusam is a Hindu festival in which devotees travel on a pilgrimage to the caves and practice various acts of devotion (shaved heads, various piercings, and carrying offerings to the temple). The festival has been celebrated at the caves since 1892 so I was thrilled to be lucky enough to attend.  I was staying friends of my friend Charles (whom met in Korea) who lived conveniently close to the train line which would take me to the caves. Aside from having to face the heat and battle through the crowds it was promising to be an easy day.


Riding the train towards the festival I stood out like a sore thumb - I mean picture it, small white girl among hundreds of Indian and Malaysia's, most of which wearing  traditional clothing. I was wondering just how many tourists were going to brave the crowds and join me that day.  Upon arriving I was met by millions of people, I would say that's an exaggeration but "In Malaysia, the temple at Batu Caves...often attracts over one million devotees and tens of thousands of tourists" ~Wikipedia.  Thankfully I had mentally prepared myself and joined the sea of people, walking through stalls of clothing, foods, drinks, and tons of trinkets for sale.  I wasn't really sure which direction to head but I figured finding the caves and ginormous Murugan statue couldn't be too hard. 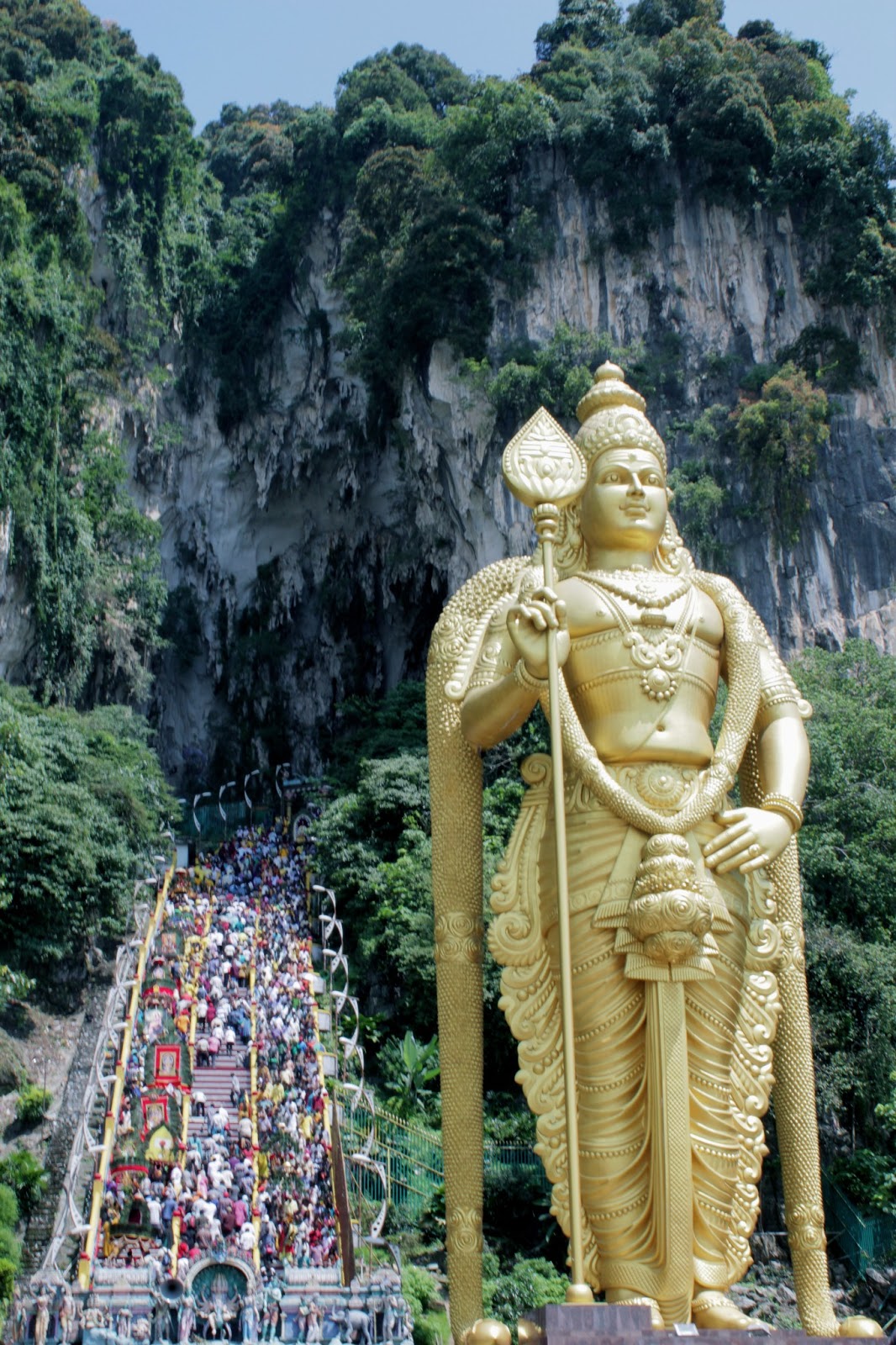 After zig-zagging up and down rows of vendors I joined the line heading to the caves - the stairway was sectioned off into different routes, one for the devotees, one for the public and the last an exit for all.  I barely had time to be bothered by the hot sun or scorching heat as I tried to take in everything that was happening around me. It's amazing that these people carried the large Kavadi throughout their entire pilgrimage (almost 15km) to the temple, and now still had to make it up the massive staircase.  There were men, women and children -  young and old making the trek to the temple, definitely was a sight to see.  Once up the stairs and into the caves I continued to be in awe, the masses of people was unreal but almost everywhere I looked I was welcomed with a smile. 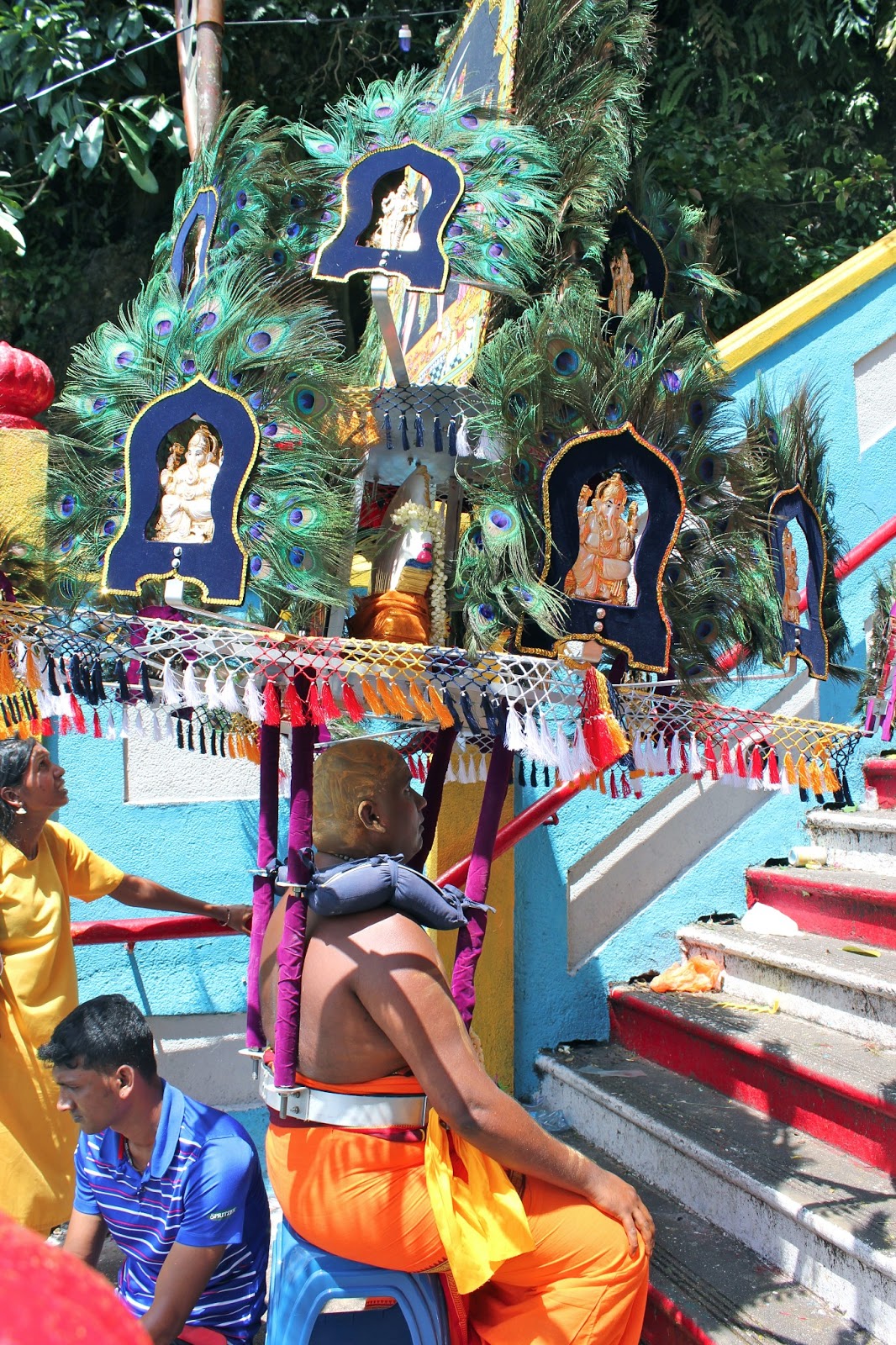 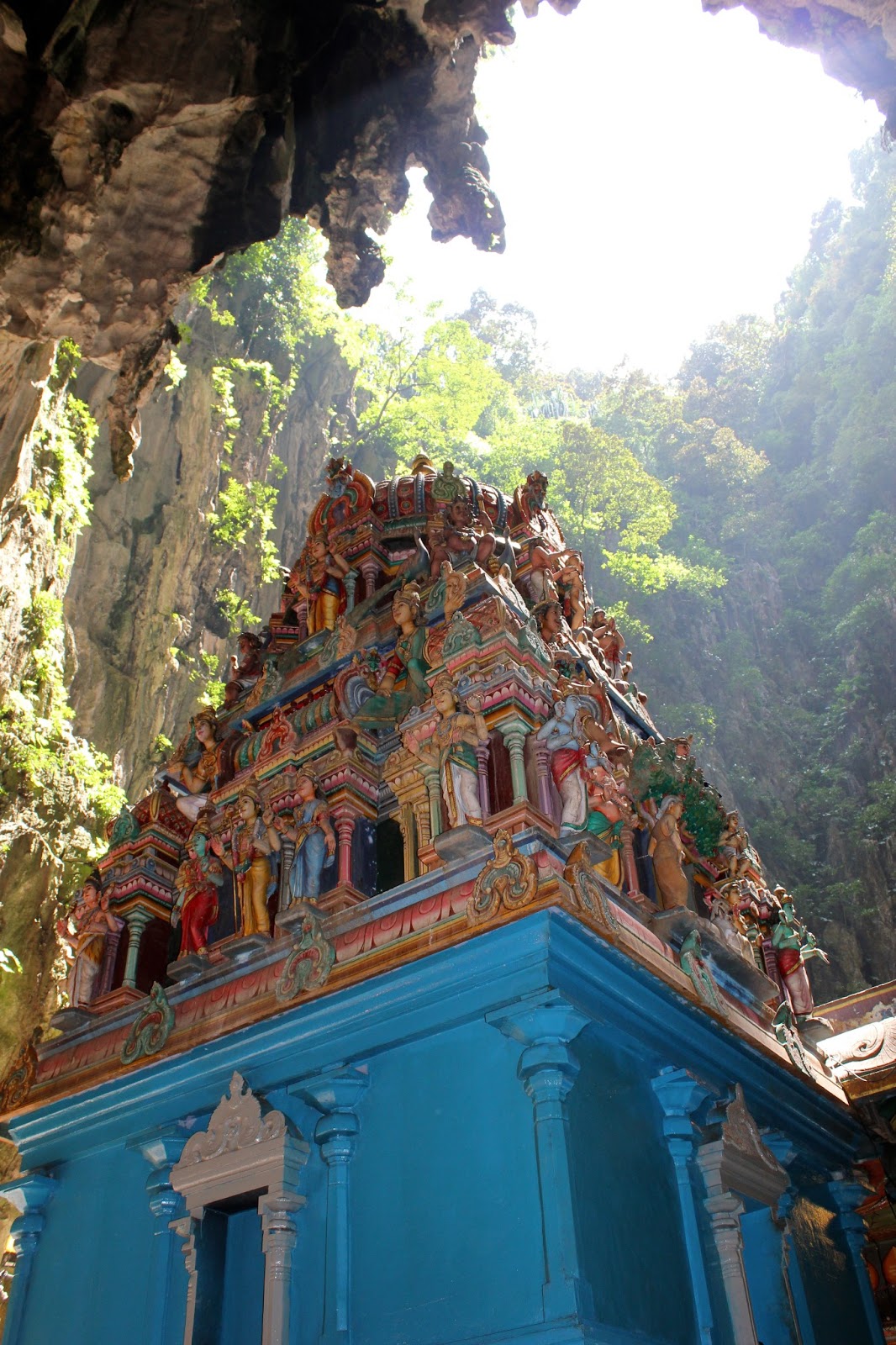 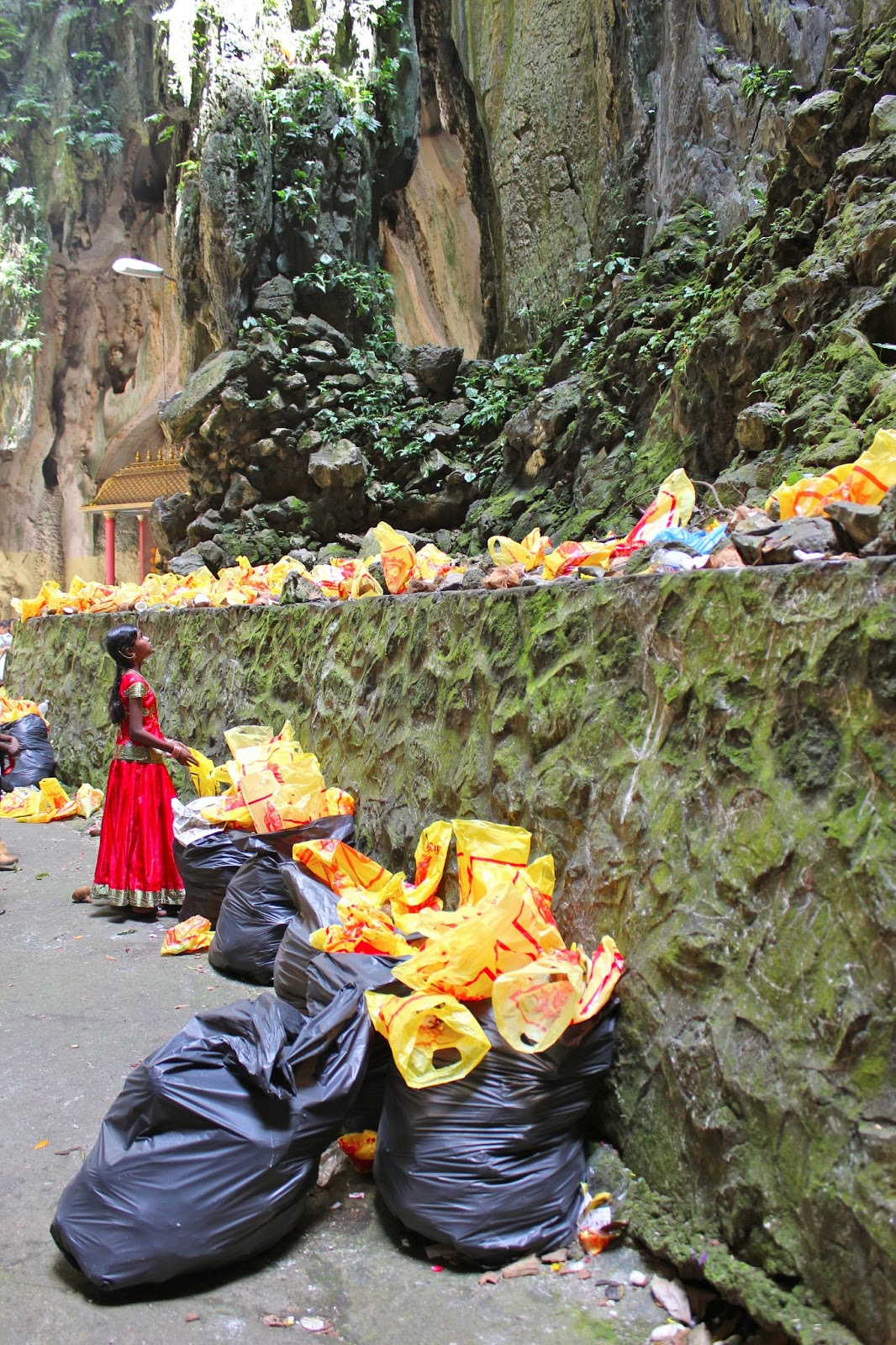 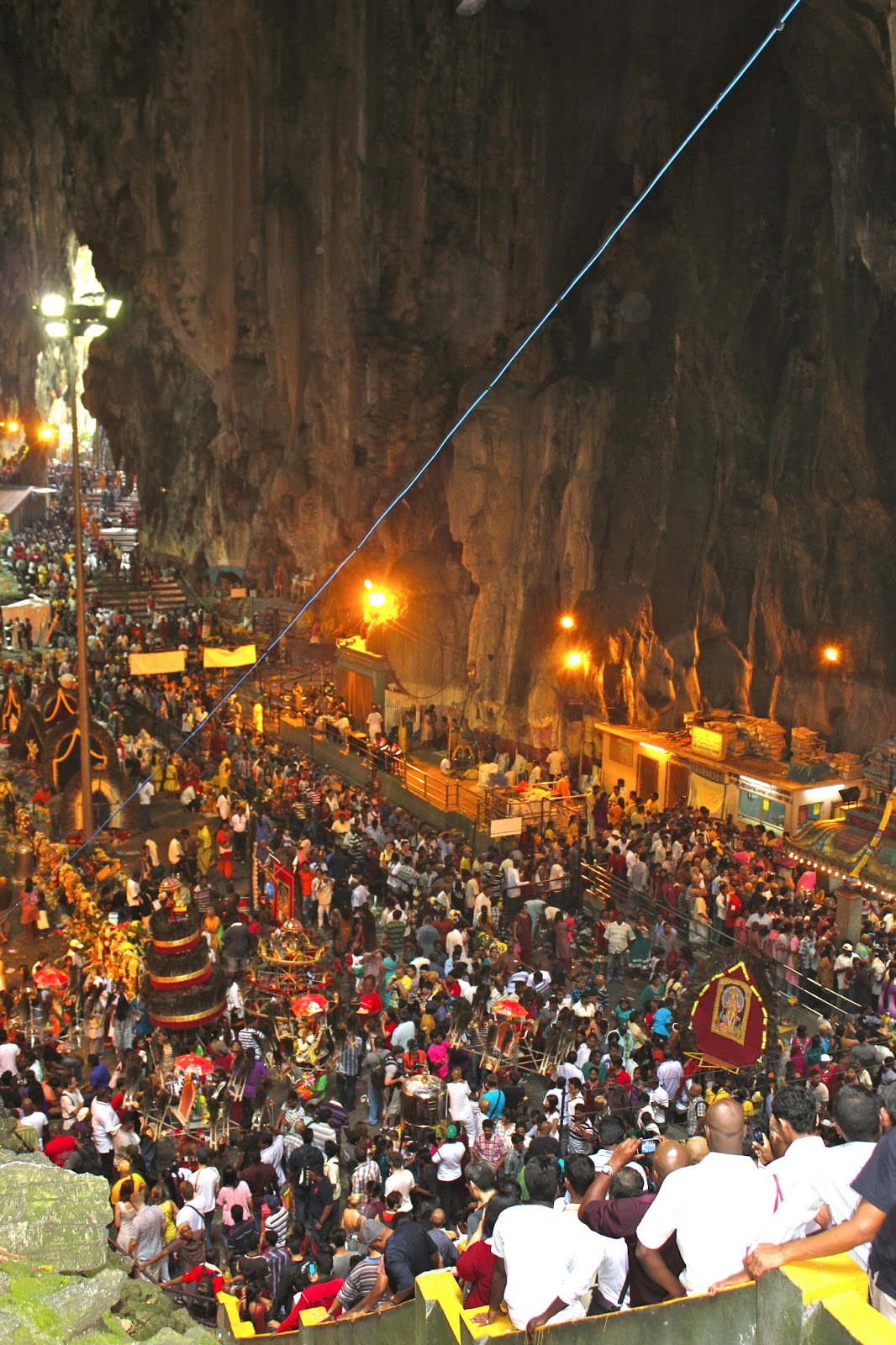 I was in no hurry to rush through the cave, there was too much to see and not to mention it was a bit of a relief from the intense heat outside.  As I entered the far end of the cave I watched as children tried to feed bananas to the monkeys, families sat together enjoying a meal, and hundreds prayed.  I stopped to watch as one devotee was removing the Kavadi and was enthralled by what proceeded to take place.  As the Kavadi was removed it was as if years of burden were taken from the mans shoulders, he was handed a plate of something which was then lit on fire. It seemed as though he was praying and then proceeded to blow out the flame, repeating this process a few times.  As I stood there, intrigued, the man fainted, having friends and family help him to the ground safely...after a few minutes he was back up and just like that it was over, as if nothing had happened. 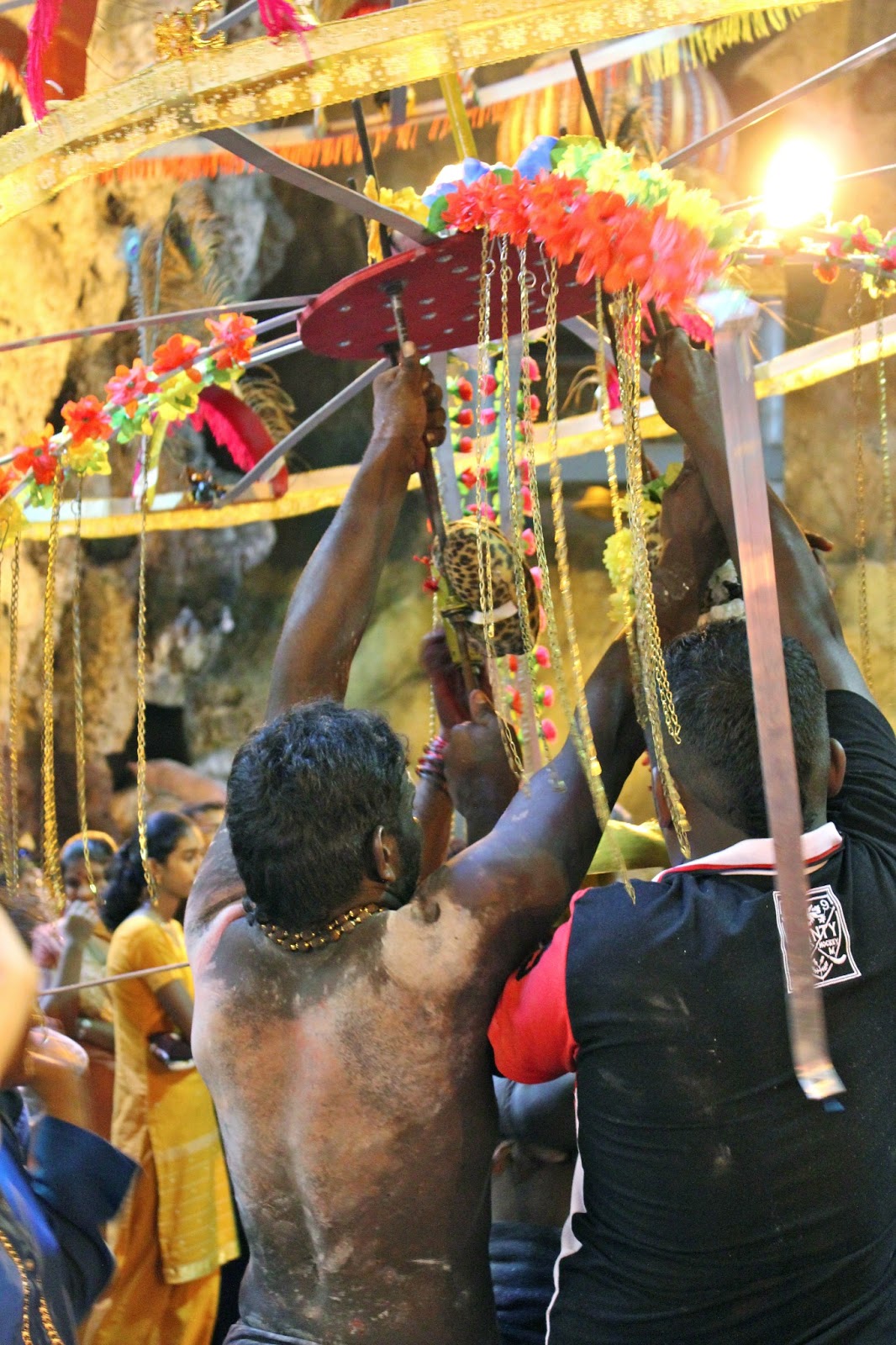 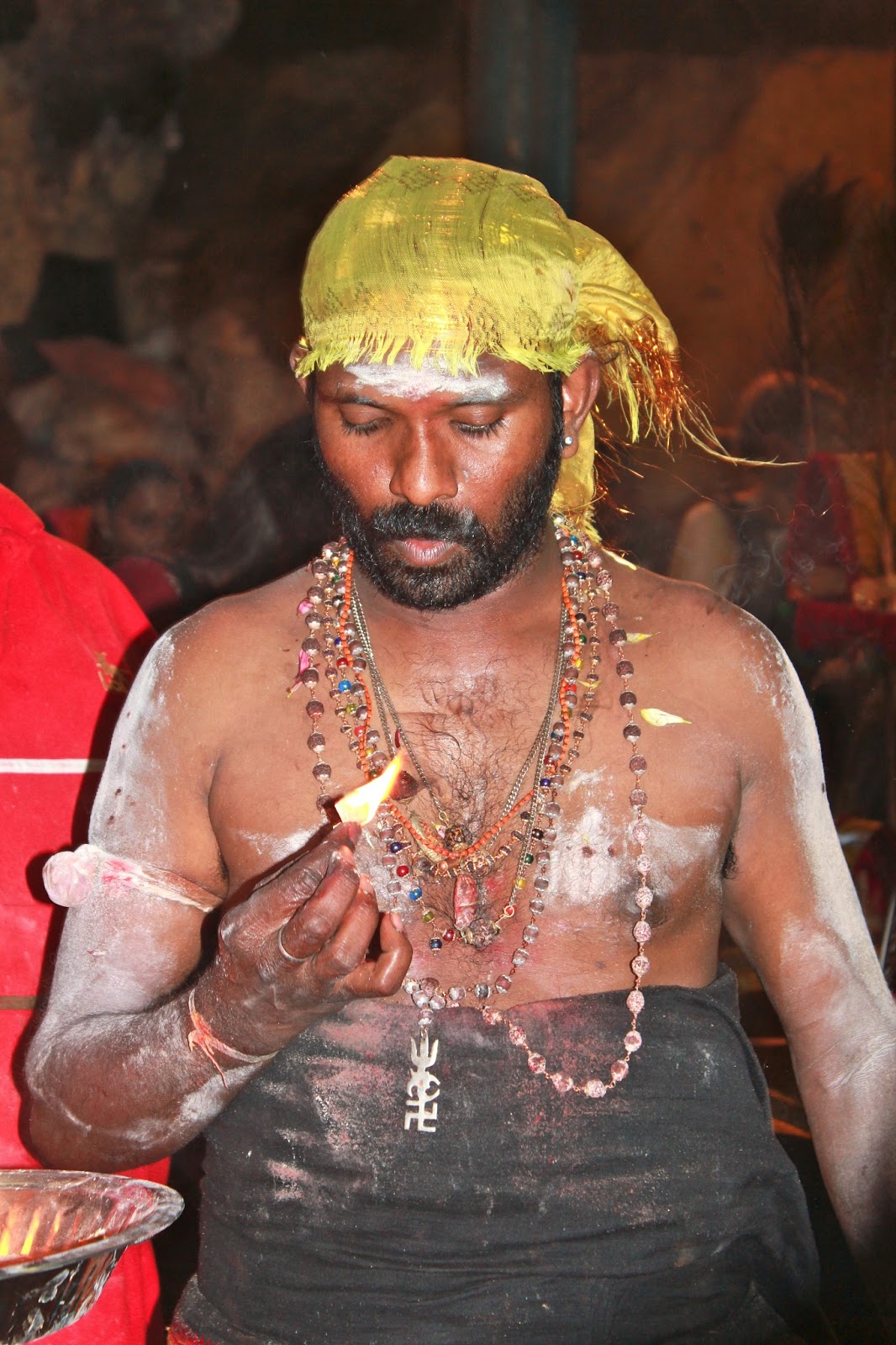 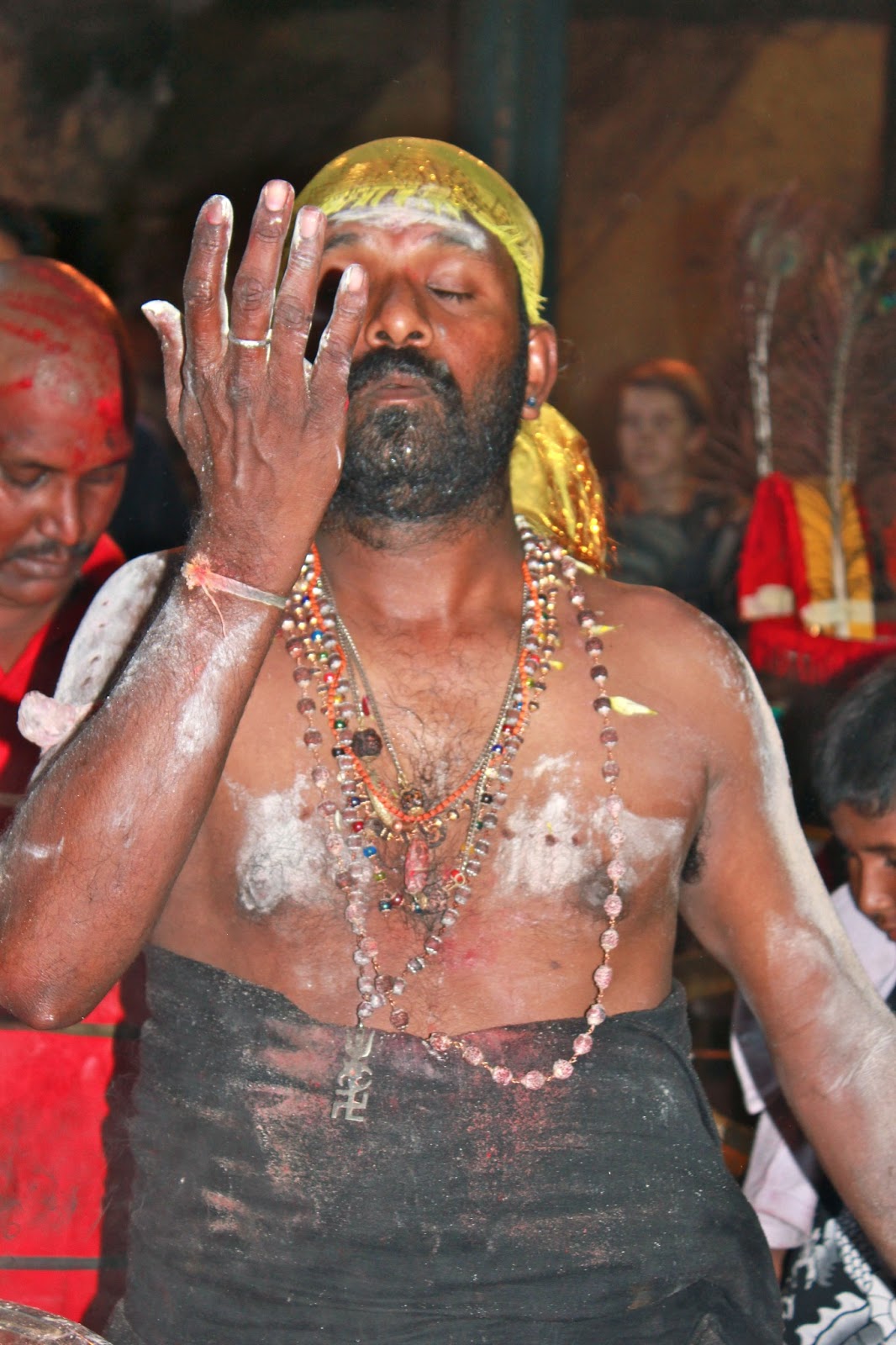 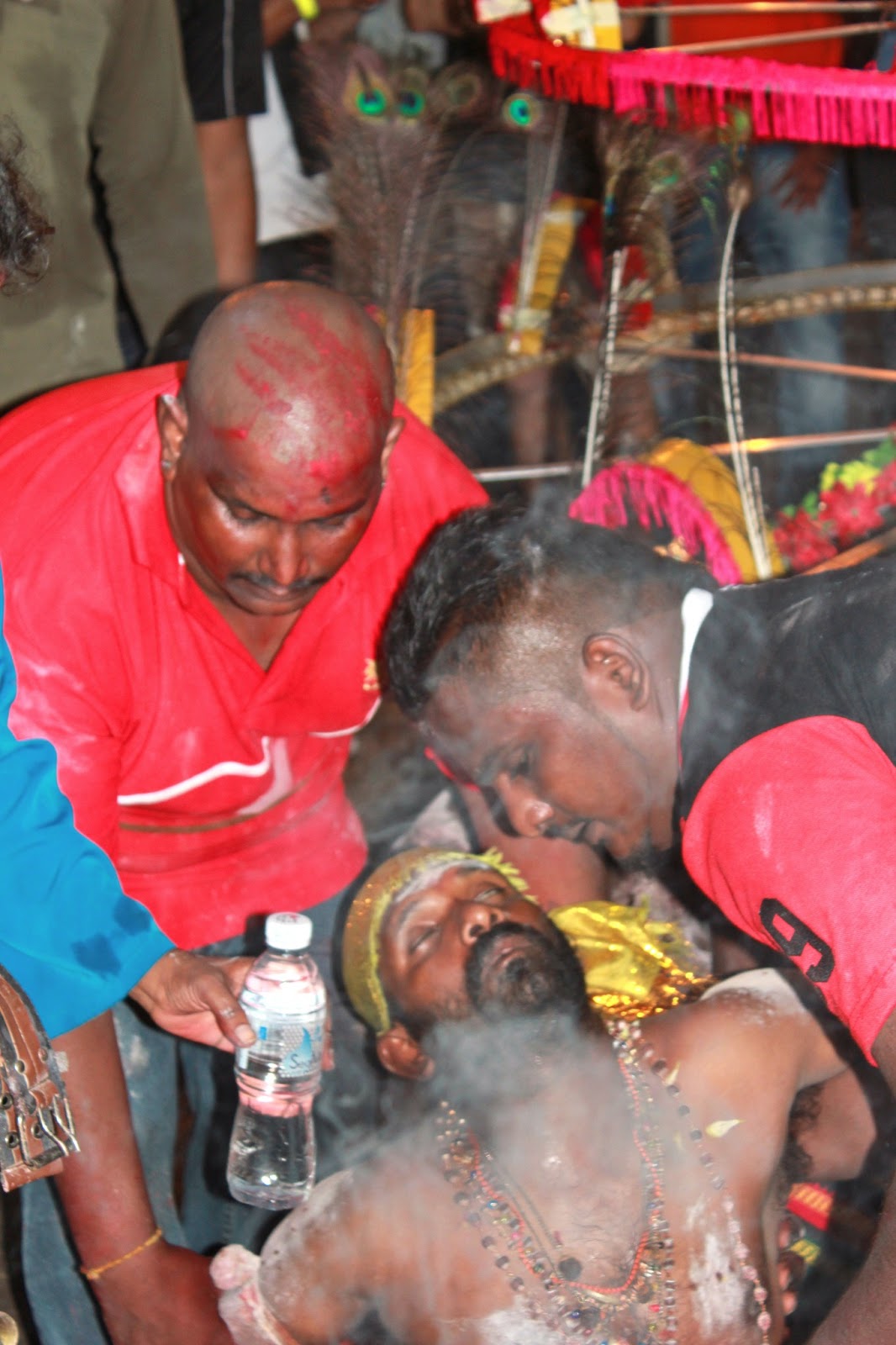 Having wandered the cave, taken loads of pictures, chatted with a few locals and overall being impressed and amazed I decided to make my way out, there was still a lot to see. I spent the rest of the afternoon exploring the area around the temple, browsing through the seemingly never-ending stalls of food, trinkets, clothes, and drinks.  I satisfied my hunger and regained energy with bubble tea and some traditional Indian sweets - which I wish I could find more of. I'm not usually one for souvenirs but there were a few things that caught my eye and screamed my moms name so I also made a few purchases.  As the afternoon came to a close the storm clouds rolled in and so I decided it was time for me to head back.  Busy, crowded, hot and sticky it was, but it was definitely all worth it - a day I won't forget. 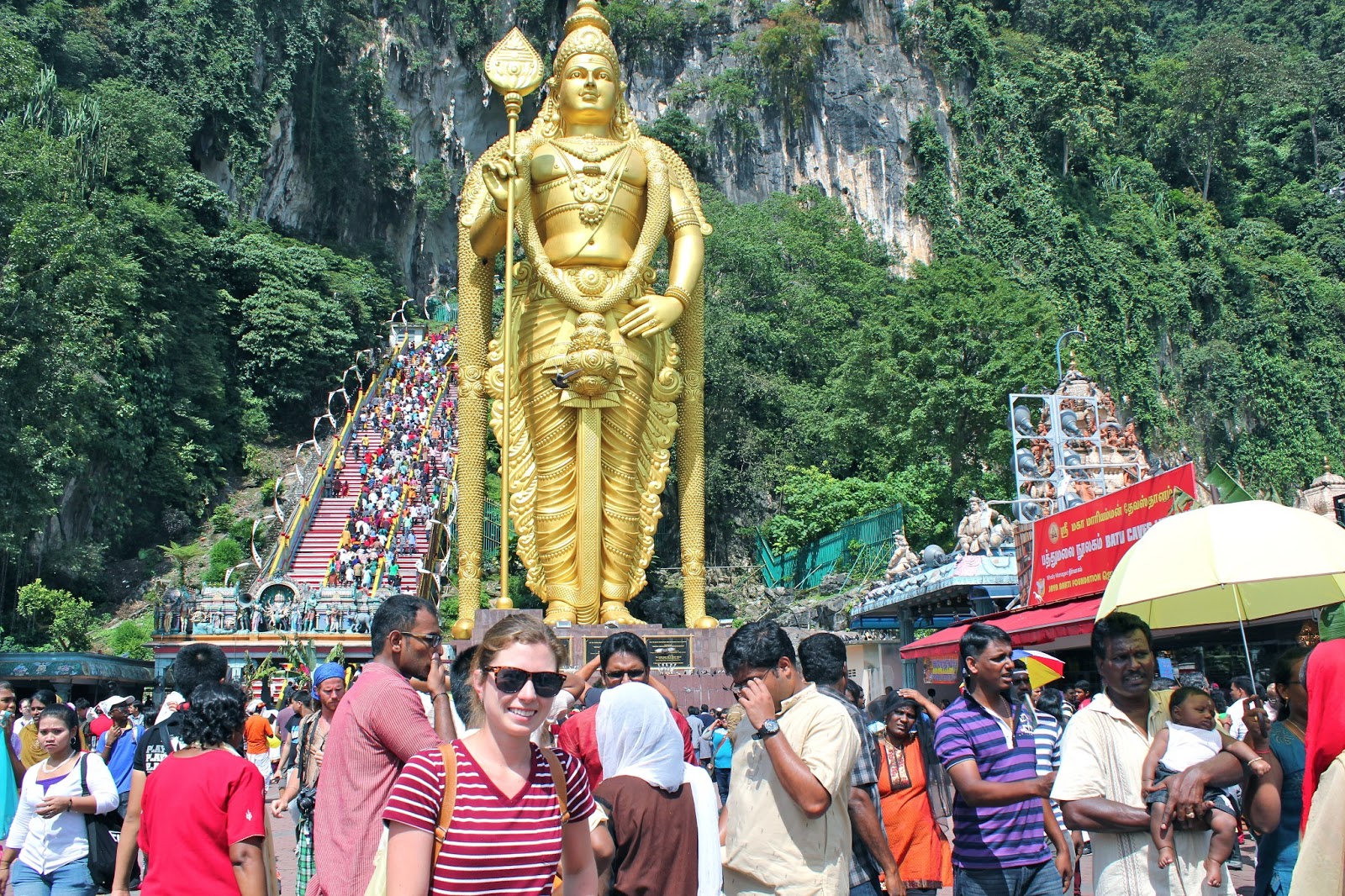 Posted by Stephanie at 2:11 PM