Not your Typical Friday

This blog post is a bit, and by a bit I mean closer to a month, delayed, but hey - better late then never right?  I'm not really sure what I've been busy with that delayed this post, like seriously, i'm not really sure where I've thrown my time in the last few weeks.  Sure outside of school I've fully immersed myself back into yoga, friends, a little running, oh and lots of sweating. But at school I haven't had much to do - movie watching, game playing, oh and the little bit of grading speaking tests of few weeks ago.  Hell, I don't even have an intense summer break to be planning for so I guess it's a mystery, where has my time been going.  Safe guesses go to Facebook, Instagram, Yoga  articles , oh yeah and reading various travel blogs dreaming about future travels. Okay so anyways back to the point, a few weeks ago I was told I wouldn't have classes on Friday but instead could choose between three things 1. Volunteering with the first grade 2. Brain meditation with the second grade or 3. Sit at my desk all day.  It was presented as a choice but any retard that can read body language and knows Korean culture would know I was meant to join option 1, and so that's precisely what I did. 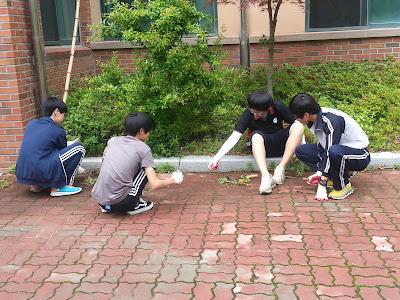 I'm not sure if it was the weather, pure laziness, anticipation for the weekend or what but I woke up on the wrong side of the bed with a bug up my butt - seriously I was crabby.  No one seemed to urge me in the direction of the buses so I thought maybe I could sneak under the radar and just stay at my desk, or retreat to my classroom and burrow in like a mole. Well luck wasn't on my side, Anna soon came running in "Stephanie, we load the buses now - okay come you join me!".   I had no idea what was in store for the day but was soon told we were on our way to Gimcheon to, get this, pull weeds. I'm not joking.

Apparently each class was given different volunteer activities at various locations, and thanks to my terrible memory and procrastination in writing this I forgot what those things were - but lucky me I was in the middle of nowhere, shovel and gloves in hand, ready to dig some weeds.  I channeled my grandma (she used to scrape the weeds out of our driveway cracks like it was nobody's business) and got to work.  Being a teacher I didn't actually have to join, but it's not like I was going to just stand there for 3 hours.

Despite my crabbiness and the little bit of rain that was starting to spit on us, it wasn't really that bad.  I think one thing that made it more bearable was the boys I was working along side, they found the fact that I was actually working hilarious, and commended me on my great work.  Not only that but they were cracking jokes, listening to music and of course dancing - also to their great amusement was any time I understood their Korea, spoke Korea myself, or hummed along to their songs - sometimes people really must think I live in an American bubble or something. Like I live here, of course I know how to use chopsticks, I can eat spicy food and yes I even know the music.

After our exciting morning of pulling weeds it was time for lunch, which I came to find out would be Kalguksu (lower on my list of favorite dishes) but beggars can't be choosers.  Actually most of the teachers weren't too excited about the plan, Anna and myself would rather have had 'beef soup' but when you're traveling by bus you don't always have the choice to depart from the group.  I thought everyone would be eating together but as soon as we arrived at Geumosan the kids took off in their separate directions while I joined the rest of the staff for our heaping bowels of noodles.  There was some improvement however as our meal began with Paejeon, one of my favorites, and loads of Kimchi.  Upon eating some of the Kimchi I heard my name muttered from the other end of the table, apparently one of the math teachers has never eaten near me at lunch because he was shocked to see me doing so.  After lunch we were supposed to go hiking but the females I found myself with had other plans in mind.  We got comfy in a coffee shop gossiping for two hours while the kids wandered around, few of which I actually believe went hiking.


Despite my AM crabbiness the day actually turned out to be enjoyable.  I got the chance to interact and get to know a few more of my first grade boys, bond a little more with the first grade staff, and after all I didn't have to teach. 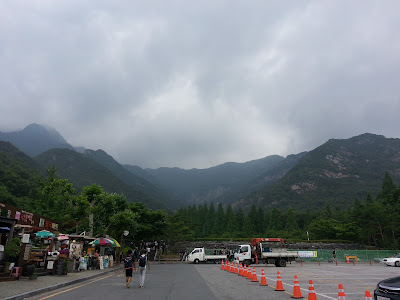 I was going to stop there but I figure I should mention what REALLY turned my day around - on the way to lunch as I brooded in my crabbiness I began texting a few friends I hadn't seen in a while.  Before long I had plans to join them in Daegu for a night of drinks, laughter and noraebanging.  I was beyond excited to see these boys, and spent the rest of the afternoon texting 90's references back and forth with Wesley, in preparation for our noraebang session.

There really isn't much of a story so I'll let the pictures do the talking.  Basically we met in Daegu, hit a few bars [including the hard to find hooka bar], had some awesome conversations, and finally made our way to the noraebang, which lasted longer than expected.  All of which resulted with us emerging from the noraebang into daylight and me getting home at 7am (with no hangover to follow, I might add).  Successful night indeed.