School's Out for Summer

Last week we had our annual, end of summer faculty “workshop” which was once again, a success.  I remember last year when I was asked if I would join the workshop I wasn’t really sure what my response should be. Umm workshop? Well that sounds like, work.  I soon came to learn that’s just another term for ‘field trip’, I soon came to discover they have many of these such names: college students go on “MT’s”, students go on ‘picnics’ and staff/businessmen ‘workshops’.  All are considered to be a good bonding experience but none of which require work, if you know Korean culture at all you’ll know what’s coming next – the bonding that happens is, of course, over soju and beer.

After the fun we had last year I was looking forward to this year’s trip, even with my recent annoyance with most of the staff (not their problem, I was just crabby).  I was disappointed to find out that some of my favorite co-workers wouldn’t be joining this year but knew we’d survive without them.  Thursday was a half day of classes at by 12 we were boarding the buses and on our way to 단양 which is almost two hours north of us.  There wasn’t really much on the schedule, first stop was lunch [우개탕 – mudfish soup] a quick stop at a waterfall and we were soon at the resort.  I almost failed to mention the fun we had on the way, beers were passed out shortly after lunch and soon following was the noraebus action.  No matter how many times I experience this it will always crack me up.  Seroiusly Korea brings the term ‘party bus’ to a whole new level.  I even gave in and sang LENKA’s “The Show” which Anna thought was adorable and the rest of the bus seemed to enjoy.  That afternoon we had the pleasure of listening to a woman speak to us about ‘image making’ which may have been interesting had I been able to understand the whole thing.  To my credit though, I did catch a few of her jokes and tried to follow along.

That was it for the schedule, the rest of the night was devoted to dinner, drinking, noraebanging and whatever else was thrown our way.  It was quite different from last year, no traditional Korean meal/restaurant but rather a buffet which I’ve come to realize consists of a pretty standard fair in Korea: salads, kimchi, sushi, fresh fish, a variety of ‘main dishes’ and a large spread of desserts.  Our dinner table consisted of 10 people, 5 boys and 5 girls awkwardly seated half and half, which I told them was “미국 학교” style.  Anna had the great idea to make things more interesting and pretend as if it were a “meeting”, so the girls each set our an item for the boys to pick from and we were soon paired up.  I was secretly excited but also nervous as 방민석 picked my credit card.  I know I’ve mentioned this before but he’s the math teacher that works in my office who I really wish I could communicate with more, so here was our chance.  He was, I think, harboring the same feelings as he realized we’d be paired off, and of course Anna helped to make the situation more awkward.  Calling me out for being nervous to speak Korean because of “the handsome guy” and everyone else at the table just pointing out his shyness with English.  After filling our plates and playing musical chairs Anna was volunteered to do a toast for the table.  I think the teacher next to me almost spit out his drink when I laughed along with Anna’s toast, “Stephanie can understand Korean???” I heard him mutter…yeah some of it, so better watch out when you’re talking about me ;)

Various speeches and toasts were given but before long it was time for the noraebang to begin.  Honestly I could have done without, our table was having fun playing drinking games together, acting as if we were once again in college (well for them at least, for me it was kind of like a typical weekend).  I thought maybe I could slip under the radar with the whole singing thing; seeing as we were still in the LARGE banquet room and I was fairly sober, I wasn’t really feeling it, but no dice.  I was soon handed the book and told to pick a song.  To be honest I’ve come to love the noraebang culture here but doing it among staff isn’t quite the same as rocking out to 90’s songs with Westley and friends.  There’s two problems 1. Most Koreans have awesome voices so I feel like a joke following them, and 2. They don’t know the awesome 90’s songs I can dominate, so it’s just not the same.  I finally chose “Dancing queen” by ABBA because for some reason all Korean’s love ABBA, and 서헤 진  sang with me, which I was more than thankful for.


At 9:30 we were given the boot, noraebang shut down and off to our rooms we went, but not before one last song from the principal, complete with a group circle arm in arm and hugs/high fives.  I was seriously confused as last year the drinking continued at the noraebang and around the pool into the wee hours of the night.  What was our next move going to be?  I was sitting in our room about to take a shower and pass out when 셔헤진 knocked on our door, beer and snacks in hand.  We wandered the halls for a few minutes trying to figure out which room we could drink in (almost every room had a teacher or two who was tired) but were soon gathered and again drinking.  Another thing I should point out, although it sounds like I’d now been drinking all day, I was only slightly buzzed.  When they want to be, Koreans are good at the whole moderation thing.  I guess it really helps when the glasses they drink out of are the size of Dixie cups, oh and of course when Soju’s not involved.  I guess we were back to our ‘high school’ tendencies as the boys drank alone in their room and the girls in ours – lame.  I would’ve MUCH preferred to mix the groups but I guess that just wasn’t going to happen this time around.  The women chatted, joked and gossiped while I, for the most part, sat on my phone texting boys my friends. I do have two co-teachers 서헤진 and 정은경 who try to fill me on a lot of things, so I was able to laugh along a few times.  Oh and I did share a few stories of my own.  I can tell the women are all really nice and want to communicate with me, but sometimes it’s just too much of  a struggle.  Why can’t I just wake up fluent in Korean one day!?

The next day was somewhat uneventful, fish soup for breakfast (which was surprisingly delicious) group picture, and then some sightseeing.  Our original schedule had us returning to the school by 12 with no lunch included but I had a feeling those plans would change.  We spent a few hours in Danyang exploring caves and a neat part, neither of which I ever caught the name of so I’ll just let the pictures do the talking. 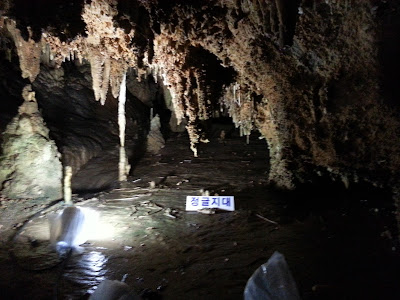 On the way home we debated eating lunch at the Andong rest stop but that was abolished in favor of lunch back in Buksam.  Thankfully Korean’s are always eating so I was supplied with ice cream and coffee to tide me over until that time. Once again I was the star attractionat lunch as many teachers wondered over my ability to eat spicy food.  이재덕 “J.D.”  is, I’m just learning, one of the nicest guys at our school, and it’s a shame I didn’t know this sooner.  He was at our table the previous night, across from Anna and I on the bus, and now across from me at lunch, staring with amazement and confusion at my eating abilities. “Did you eat spicy food in America? Do you think you could have eaten this when you first came to Korea? How did you learn to eat spicy food?”  At least they didn’t commend me on my ability to use chopsticks, oh wait, that happened too.  Although this time it made sense, we were eating suuuuper bony fish soup, I explain it as playing “Operation” with my lunch, so when 박명절 commended me because he thought my skills were better than his, and with one of the ‘hardest things to eat with chopsticks’ I didn’t mind too much.
So just like that, after weeks of anticipation our workshop was over. I can’t say it topped last years antics but it was still a great bonding time with my staff.  They all wished me a safe and enjoyable trip back home as we parted our ways, and here I am on my way to Wisconsin.  I can only hope that the math teachers (seriously all the cool male teachers are math or PE teachers, which ironically is where my interest lies) will last into the next semester, and they won’t retreat into their boyish smiles and awkward “hello’s” as we pass in the hallways.