Thankfully the worst (or best, I still haven't decided) was behind us, leaving us with two relaxed days of biking.  Knowing we had less distance to cover on Friday there was no concern about waking up early for a fresh start but of course most of us were still up with the sun.  Sara and I took advantage of the beautiful weather and walked down to check out the nearby Watazumi shrine.  Probably the most interesting aspect of the shrine was that the tori (gates) were situated so that as the tide came in and out they changed from either submerged in water or on dry land. After a quiet stroll through the shrine and multiple pictures we made our way back to camp to enjoy breakfast before heading out for the day. 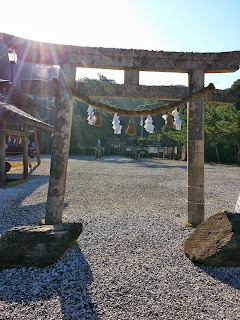 Although we had a much shorter course for our Friday ride we still wanted to get out early in order to beat the heat.  Before we left I found friendly guy to take a look at my bike, I figured working breaks might be a good idea for the day. Sara and I took off slightly before 9, made one last stop at the super value and were on our way.  As we came around a final corner before connecting to 382 we ran into Adam and James who had apparently discovered the shorter route (thanks William for telling us not to go that way).  We joined together looking somewhat more intimidating (I think I cracked a biker gang joke) and continued on our way.  I was tailing Adam for a majority of the ride which didn't provide much a tail wind but did supply me with some cool action shots. Funny because literally minutes before meeting up with these two I was telling Sara I wished we had some paparazzi to document our ride.  There were a few stops along the way to take in the scenery, catch our breath and stretch our legs but what seemed to fast to be true we arrived to the entrance of Aso Bay Park, our home for night number 3. 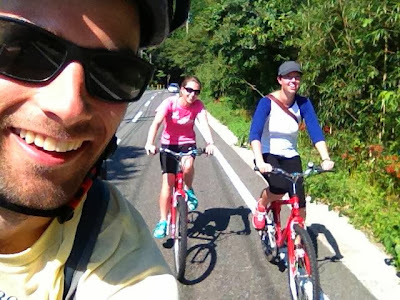 I made sure to listen closely to Williams instructions that morning as to avoid adding another 30 minute detour to our route and distinctly remember him saying, you arrive at the park off the main road and we're right there.  So sure, my gullible self believed William, expecting our campsite to be fairly close to the park entrance but I was wrong.  We all quickly learned to take anything William said with a grain of salt, apparently his idea of right there  is up and down three large, long winding hills; potayto potahto. Once at the campsite we were all ready to jump in the water and rid ourselves of the layer of sweat, sunscreen and grime that we'd acquired along the way. Unfortunately there was no beach and only a small bay full of jellyfish there to great us.  Additionally, there was limited shade at the camp grounds so we soon found ourselves huddled together talking, reading, napping, playing cards and eating, at least for the lucky ones that were on the first grocery run. William spent the day shuttling people back and forth from campsite to grocery store to campsite in our trusty little van.  I was on the second grocery run and by that time my stomach was yelling, apparently my breakfasts weren't big enough during the trip. My trusty diet of sushi and beer continued and did an excellent job of calming my hunger pangs.  Adam and I wandered the camp grounds while others chose to partake in a game of ultimate frisbee before many of us once again made the ride up to a nearby observation desk for another gorgeous sunset.


Our foursome from the day carried over into night where we tried to entertain ourselves with what we had available: a frisbee, ball and sticks, you'd be surprised at how creative we got. After it got too dark for our games we continued with some more riddle action, yoga, and Adam even busted out the Rubik's cube. Eventually our tiredness got the best of us and we decided to call it a night, after all we did have some more cycling ahead of us.
Despite the fact that we had another short day of riding and I'd been running my body down to empty every night it still insisted on waking up early with the sun. I was up before everyone else and had little to do so I took advantage of the fresh morning air by walking out to the bay, taking some pictures and ending with a peaceful morning yoga session.  Laura had plans to ditch her bike and walk/run the rest of the way to town (yes, she's a marathon runner) so she was also up early, perfect opportunity for me to organize a bike swap with her.  Others slowly started to emerge from their tents, brushing dew off their belongings, assembling breakfast and preparing for the day ahead.
We left camp in our fearsome foursome plus Andy and Kate but that didn't really last for long.  After a few hills we lost half our our group, leaving Adam Sara and I behind.  I thought my bike swap was going to benefit me (going from mountain bike to road bike) but having only two low gears did not get me very far. Seriously this trip would've been a whole lot different if we were equipped with appropriate bikes. The group eventually dwindled to just Sara and myself as we took our time, found some shade and made a few detours. We met up with many different bikers at the supermarket but soon branched off in our different directions once again. 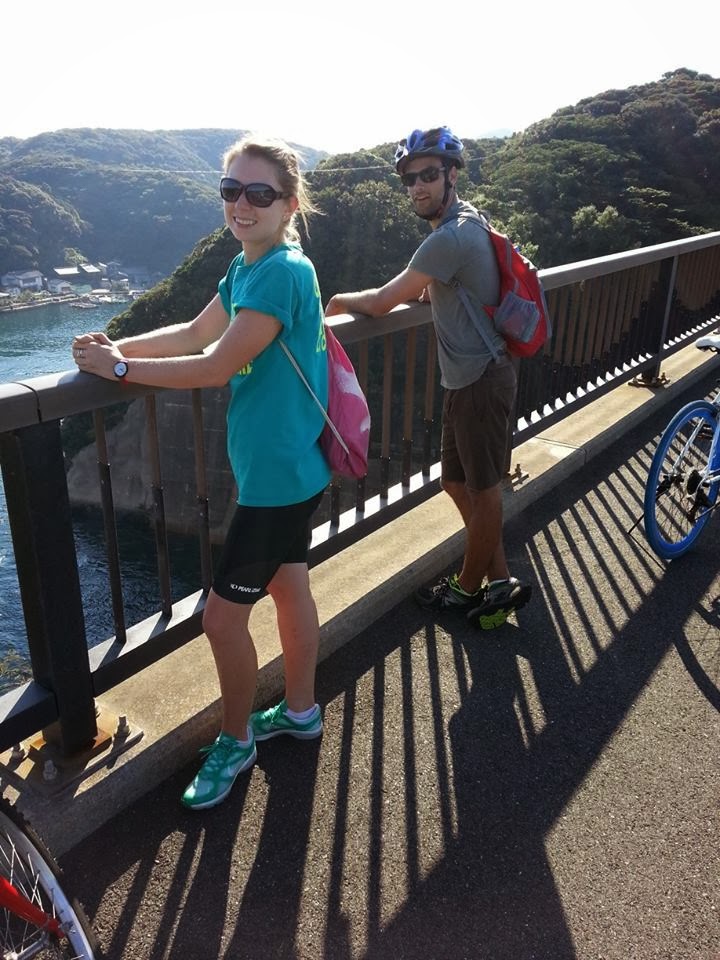 When I was sure we still had a few kilometers to go before we reached Izuhara Sara and I came across Hachimangu shrine so we decided to park the bikes and take a look.  It provided some nice shade, a bit of history and plenty of Korean tourists, delivered by the busload.  As we sat in the shade taking in the beauty around us we noticed a few of our biking companions whizzing by and then circling back to where we were, turns out we were already in the final town. The meeting point was set for Mos Burger a famous Japanese chain but I was a little let down when I realized what it was - Japanese fast food.  Instead Andy, Sara and myself were on the hunt for the mysterious Sushi restaurant that seemed to not exist, despite the fact that half of our group was apparently eating there as we wandered the streets. 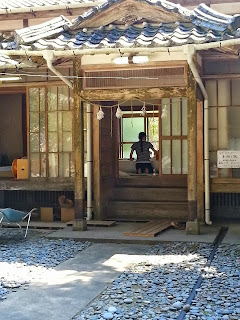 We were about to give up when we finally spotted the others who were now returning from their sushi feast. After bragging about how delicious it was they were able to give us directions and away we went, to be fair the restaurant was in the most obscure location in what appeared to be an abandoned building, no wonder we couldn't find it. I'm pretty sure i've been to the same sushi chain in both Malaysia and Korea but that didn't make it any less delicious, and on the plus side it was super cheap.


After eating we made our way back to the meeting point to figure out what we should do until 3:30, when William was supposed to be back to take the new load of people to the campsite from the first night.  This is where the organization of the trip went a little downhill.  Instead of charting one big bus  ('there were none available') for all of us to ride back to the first campsite in, William was planning to make three trips using two smaller vans.  There were soon roughly 20 tired, hungry and bored foreigners sitting around trying to figure out how we would decide who got to leave at 3:30 and who would stay for the final run at 6, which no one was keen to do.  Our problem was soon solved when we got information that there had been an accident (nothing serious and no one injured, thankfully) but that William would not in fact be returning for us. 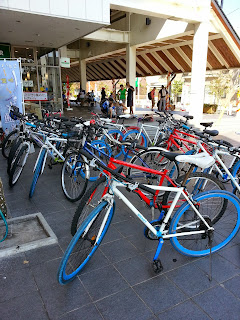 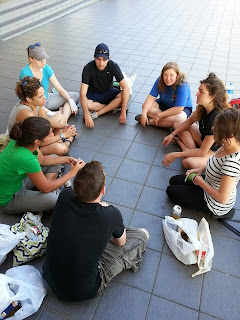 William instructed us that we would have to take the city bus which unfortunately did not leave until 6:25, cost $10 and would take roughly two hours to get back to our campsite.  Not wanting to believe that was the only option a few proactive people got to work on finding us an alternate ride home.  Soon Laura and Kate returned with good news, there was in fact a bus available for charter but we would have to pay about double the city bus, were we interested? Um duh.  I somehow wound up with the phone to contact William so after a few phone calls, conflicting information, poor reception and broken conversation with the Japanese workers who were helping us, we finally had it settled that yes, we should book this bus and he would be paying for it. Good work team! Everyone did some last minute shopping (buying beer) and we were soon on our way back to the rest of our friends who had now been waiting for a majority of the day. 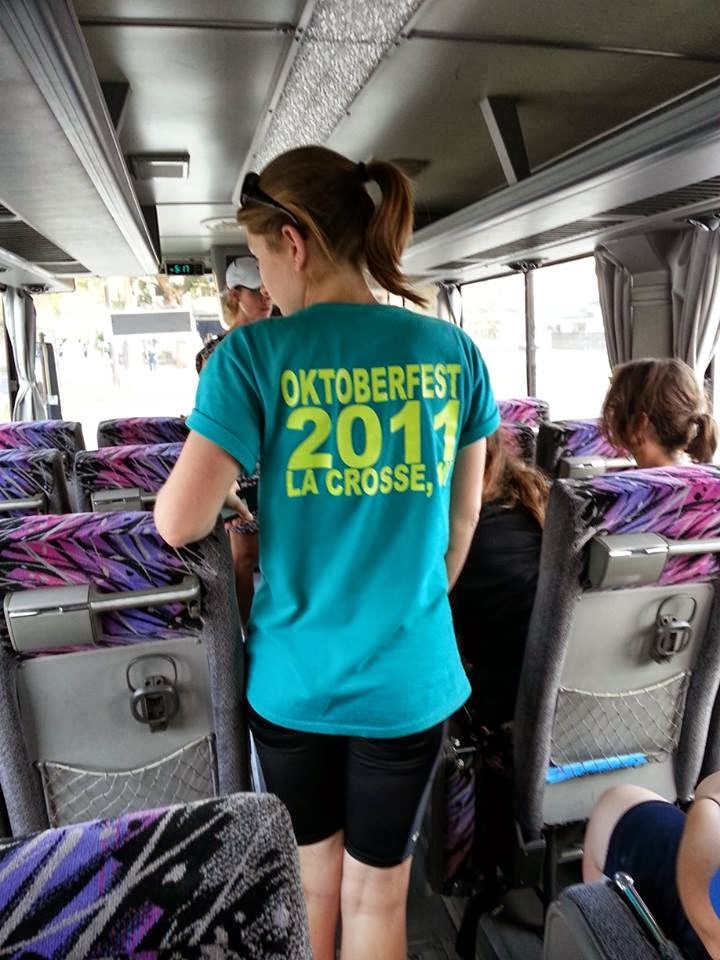 We got back to the campsite just before 8 o'clock which was great news for anyone wanted to hit up the onsen (bath house) again, as it closed at 9.  After a few beers and the long day I was actually too tired to bother going, instead I sat and talked to some of the other people who had been back and waiting for us all day.  Thankfully they took it upon themselves to set up our tents for us so we were all able to relax and enjoy the night, minus William who was dealing with the police due to the accident from earlier in the day.  It seems as though they were leaving details out of that whole story because the police kept them for questioning until nearly 3am and returned the next morning, ultimately telling them they were not to leave the island that day and had to stay until the 'investigation' was complete. There were issues with the driver (not William) not actually having an international license and the police weren't happy with the fact that they 'left the crime scene' but really 3 days to investigate?

After a few short hours of sleep (thanks sun for waking me up again) it was time to pack up and head home :(  I was looking forward to a real shower, and a good nights sleep, but other than that I wasn't ready for my vacation to be over.  I just spent 5 days with 30 some awesome people and once we returned to Korea we'd all go back to our hometowns, not knowing if we'll see each other again.  Honestly when I got home that night I wasn't sure what to do with myself (well after my shower at least), it was so quiet, there was no where to go, no biking involved, and no one to talk to. Thankfully there's this new invention called Facebook so we were all soon real friends and we're slowly planning our next adventure, maybe we'll leave out the bikes this time though. 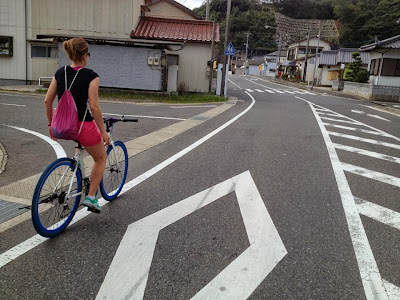