The heat is officially gone, the leaves are starting to change,and  temperatures are dropping. There may be a slight lack of pumpkin spice and football in my life but fall is officially upon us.  The weather has been perfect for the past few weeks, cool in the mornings and evenings but still sunny and beautiful during the day. After being introduced, by my co-workers, to a new patch of beautiful here in Buksam I decided to take advantage of the beauty that surrounds me and spend my Saturday in the mountains.  I know I've mentioned it before, more than once, but i'm surrounded by beauty in this country. Gumi isn't really known for much, in fact when foreigners are asked "What's the best part about Gumi?"  \a popular response is, "It's easy to get out", but we do have a pretty sweet mountain.  Geumosan shadows over my home and conveniently there's a few paths from Buksam heading up the back side.  Last friday my co-workers introduced me to a new starting point so on Saturday I decided it was time to explore. 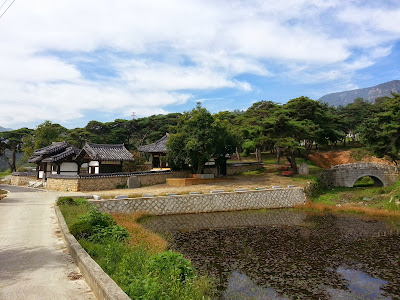 I had done a similar route once before with my friend Shaun and remember the entire trip taking somewhere around 6 hours so I had a rough idea of my time frame for the day.  My only concern for the day was making it down the mountain before sunset, hiking in the dark is not really my idea of a good time so I figured if I left by 12 I'd be more than okay. After some morning yoga, breakfast and coffee (and a pathetic attempt at recruiting someone to go with me - honestly I wanted to go alone) I set out on my adventure.

The last time I did this hike I started from directly behind our high school which apparently is a much more popular route than the one I had chose this time.  I was fighting with some overgrown grass, thorny bushes and lots of burrs all while trying to decide just where exactly the trail was.  Not only was I fighting plants for the first 2.2km of hiking but I was also completely alone, not another sole in sight until the trail met up with the one leading from my high school.  From there it was a short hike to the top of 효자봉 where I took a quick rest, gave my legs a much needed stretch and continued on my way.

After leaving a slew of Korean hikers behind at the summit I was once again on my own with nature as my only companion.  I had remembered from the map at the beginning, and my previous experience that I should be coming to a small road before too long, which as I continued seemed to be taking a bit too long to reach.   The interesting thing about hiking Geumosan via Hyojabong is that you have to go up, then down, only to go back up again, so at this point I was on my first decent.  The scenery wasn't looking all that familiar and the trail was starting to narrow so before heading too far in what I assumed to be the wrong direction I turned back to check I didn't miss a turn off. Sure enough, I must have been too focused on the trail ahead as I completely missed a pretty obvious turnoff to the left. Happy to have caught my mistake before it cost me too much time (about 15 minutes), or energy, I got back and track and soon came to that road I was waiting for, complete with yelling ajummas. 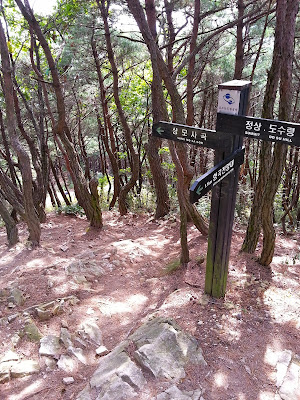 I can only assume the group was arguing about what path to take, my fingers were crossed that they would not be following in my footsteps. Arguing ajummas and ajosshis aren't my idea background noise for hiking so I decided to pick up my pace a bit until they were out of earshot.  Thankfully this stretch of the hike wasn't too intense so this was easily done but before long the difficulty picked up a bit, throwing in lots of rocks and even some ropes to assist you along the way.   The first few sets of ropes are placed as more of an assistance than anything, not completely necessary but there to help you out should you need it.  Before long though the the trail get'a a bit hairier and the ropes are a necessity.  It was shortly before the tough patch that I came across a Korean couple sitting and relaxing/snacking to whom I offered an 안녕하세요 and met with a friendly smile and then  a concerned 혼자이에요? (are you alone). I paused to answer their question and assure them that i'd be okay but had to insist a few times as the husband insisted we go together ~ seriously I love the people here, but I was enjoying my alone time.

I passed a few Korean men coming down the mountain (props to them because I wouldn't want to take this path in the reverse direction) but for the most part was alone on the trail. At one point an ajossi came up behind me, seriously came out of no where, and soon passed me.  As I watched him scramble up the rocks ahead of me I kind of wandered if he'd wait to see if i'd make it.  I don't know why I doubted him, of course he turned to make sure I made it okay and even offered some assistance.  After some more difficult climbing I figured I must be getting pretty close, but then there was a clearing and I saw this....


Clearly I had slightly overestimated how much work I had just done, there was more mountain between me and the peak than I expected.  I readjusted my perspective and pushed forward, not like I had any other choice at this point anyway.  Don't get me wrong though,  I was still enjoying myself - I mean how could I not, it was freaking gorgeous?! 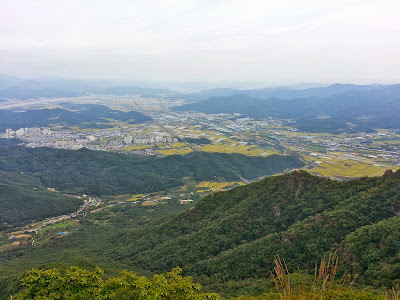 I was now about 3 hours into my hike but still loving every minute of it, I passed more and more Korean's whom all seemed to utter some form of 혼자?? to which I could only laugh.  Apparently it's not okay for a girl to be hiking alone, only the ajosshis can do that, okay maybe next time i'll take one with me.  At this point the trail had almost reached a plateau, I was basically at the height of the summit but had to work my way around the mountain to reach the actual peak.

For the last leg of the hike I was once again trailing an ajosshi (seriously where do they just pop up from) and followed him without paying much attention to where we were headed.  We soon reached a clearing, which I assumed would be the peak but then realized the peak was still up and over to the left a bit. Another wrong turn, but this one was worth the view... 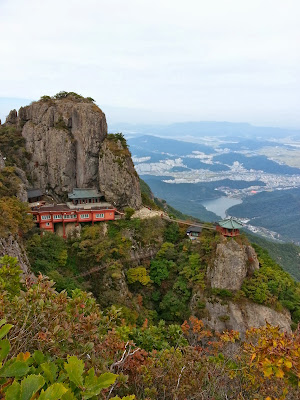 I left him to enjoy his patch of quiet and made my way back up and around to the top of the mountain, all of which would have been a lot easier if it weren't for the US Military.  Unfortunately they decided that the peak of Geumosan would be the perfect place to dumb a bunch of military equipment, I mean i'm sure it's important in protecting everyone from the big scary people up North but seriously? This is not what I want to be met by after hiking for 3+ hours to enjoy the views over the city...

Generator buzzing and barbed wire fence aside, the peak of Geumosan is a pretty great place. If you get into the right spot you might be able to spot my small village tucked behind the smaller peaks, but if not just take in the beauty of being above the world for a little while.  I made my way to the helicopter pad which I deemed to be the perfect resting place for some reflection, stretching and lunch. I know some people say they hate hiking, too much walking, makes them tired, bugs, whatever else they can find as an excuse, but honestly once you reach the top how can you not love it? The views are incredible and no matter how tall or difficult the mountain try not to feel just a little bit accomplished, I dare you. 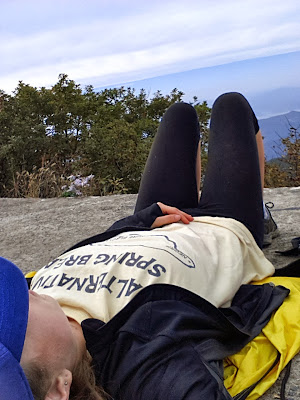 I really could have laid down and taken a nap but I also wanted to make my way to the bottom so I could figure out my method for getting home. It's a shame my scooter couldn't teleport itself to the base of the mountain for me. The way down was fairly uneventful; I found the perfect stick to assist myself and prevent some likely falls had I been without it, passed many hiking groups, dodged ajosshis and ajummas before picking up the pace to the waterfall.  Part of me wanted to take the detour to see the stone buddha but my bladder wanted to go to the bathroom more, so down to the waterfall I went. As I arrived I felt obligated to take a picture but after one quick snap the sounds of the rushing water weren't helping my bladder so on to the bathroom I went.  If you've read anything about Geumosan you'll know that from the waterfall to the base is really just a walk in the park, seriously there's small children and women in heels along this part of the mountain. Last time around Shaun and I rewarded ourselves with a few beers at the base of the mountain, but this time without Shaun's influence ice cream was the obvious decision. Milk shake in hand I began my walk to Gumi, found the bus stop and all but collapsed as I wanted for my chariot home. 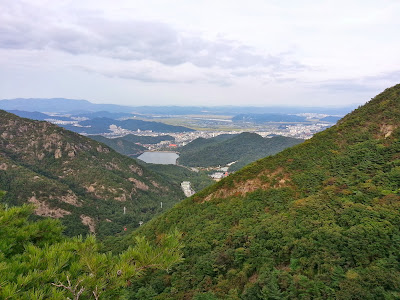 Even now, sitting here with sore legs and wincing just a bit every time I have to take the stairs I'd contemplate climbing Geumosan again tomorrow. Lucky for my legs though we have a typhoon on the way - looks like yoga, reading and coffee are in my future, not bad alternatives.
Posted by Unknown at 3:40 PM