Thursday morning I was up early, packed up the remains of my belongings, said goodbye to my friendly hostel owners and made my way to the pier. I still had some doubts about the day ahead of me but there was really no turning back at this point.  I was told to arrive at the pier at 7 o'clock (an hour before we were due to depart) but knew there would be a lot of waiting in store for me. I considered stopping to buy more snack for the journey but then decided I didn't need to, and instead went to sit at the pier.  There were already a few people waiting while others slowly trickled in, couples, friends, two families and a few other solo travelers.  I kept quiet and enjoyed my morning of observance, watching the people that I was lucky enough to spend the next 8+ hours with.  I knew that an 8 o'clock departure meant we'd be lucky to leave somewhere around 8:30 but many others seemed to be a bit annoyed at the lack of urgency on getting us aboard. Finally, closer to 9 o'clock they brought us to our boat, loaded our luggage and then gave us the go ahead to get on the boat, "one by one" to which no one paid much attention and stormed the boat like a pack of wild animals.  I hung back and laughed at the idiocracy with two others, as the rest of them made their best attempts at sinking the ship before we even left the port, great I was about to be stuck on a boat with 30 morons. 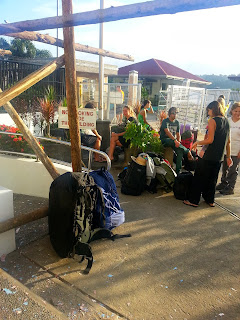 I couldn't help but laugh at the idiots as the pushed their way to the front of the line, trying to be the first one to climb down into the boat, did they think we weren't all going to get a seat?  I allowed them to push past me and when I finally did enter the boat chose one of the last few remaining seats.  I thought I got lucky, as I didn't have to share my seat with anyone, but then as I looked around I realized everyone else had a nice think foam cushion under their ass while all I had was hard plywood, jerks. I decided to take advantage of the extra life jackets floating around and built myself a little cushion, which came in extra handy when I realized I was seated right next to the engine, ultimately turning my seat into a vibrating bench, oh yeah this was going to be fun. 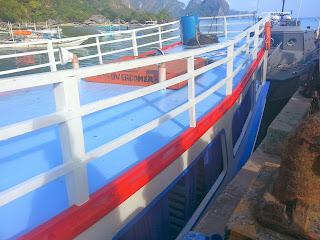 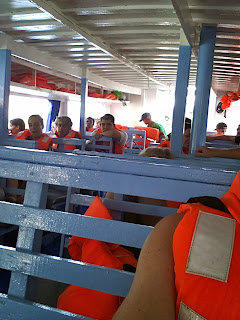 Get comfy everyone, it's going to be a long ride 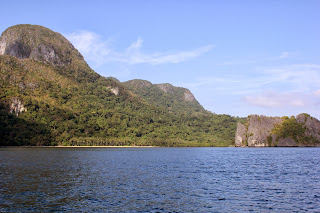 Before we were allowed to leave the coast guard made a check of the boat, for what i'm not sure, but he did have a drug sniffing? dog along with him.  After walking around and basically just chatting with the boat staff they were ready to leave, but apparently their dog was not. I took almost 10 minutes for them to get the dog off the boat, one of them finally having the sense to pick it up and carry it - and these are the people that will be saving us if we're in trouble?  I tend to underestimate the length of things (distance, time, etc.) and this was a perfect example of such a situation, 8 hours on a boat? Ehh no problem, we'll be there in no time. I spent the first few hours quietly enjoying my surroundings, thinking about life, observing the other boat passengers and snapping a few pictures. 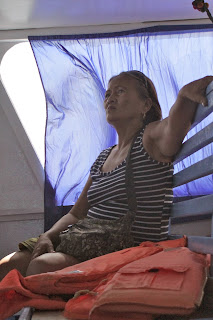 One of three Filipinos on board, she seemed cool 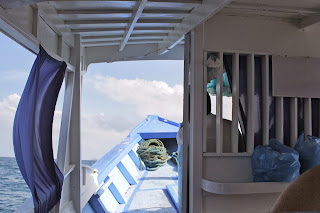 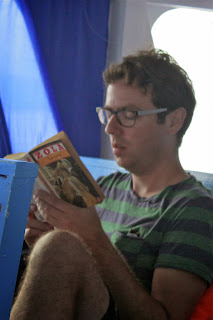 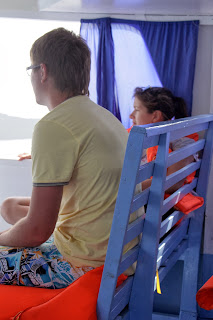 One of many Russians

After a few uneventful hours on the sea we came to a stop; one of our boatmen (the only one that seemingly knew English) explained to us that they had to change the belt pump, or something like that.  We floated around for close to half an hour while they got to work but before long were on the move again, no sweat.  A little while later they came around and delivered 'lunch' to us, which consisted of a sad looking portion of chicken and heap of white rice, damnit I should've bought those snacks. 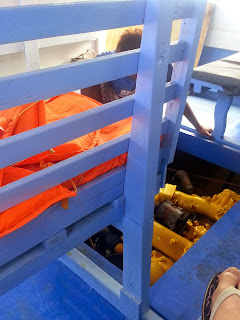 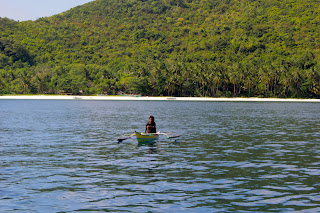 Island local coming to check out the random boat 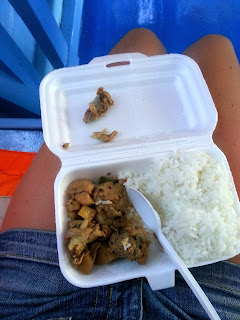 Tasted better than it looks, but not by much

After the quick repair we were on the move for a while, this was looking like it was going to be a good day.  If everything went as planned i'd be in Coron before sunset, have plenty of time to check into my room, find dinner and relax, but nothing every goes as planned, does it? We were soon coming to anoter stop, but this time there was no explanation from our boat crew.  One of the old men, who i'm going to assume was our boat engineer/mechanic, opened up the floor to the engine and started playing with it.  I had a perfect birds eye view of what was going on, watching with more intrigue than concern, after all I assumed these guys knew what they were doing. 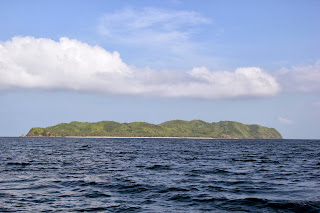 At least the views were pretty 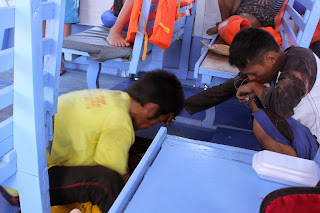 An all too familiar view for the day

It was when one of the boatmen handed our mechanic a plastic bag and some thin wire that I started second guessing my earlier assumptions.  There was a section of the engine that kept coming loose and ultimately leaking (possibly oil) and he was now trying to secure it with a tightly wound plastic bag.  A few other passengers decided to come by and see what was going on, one of which, a big Russian man, thought he should try to help.  I was embarrassed for him as he knelt down jabbing his finger at the broken portion of the engine, blabbering on and on in Russian. Clearly these boatmen don't speak English so I didn't think his Russian was gong to get very far with them, also his offer to help came across as more insulting, as if dismissing their ability.  Although I was skeptical of their method,s I knew that they guys grew up on boats, this is their life, so i'd much rather trust them than some crazy Russian dude. 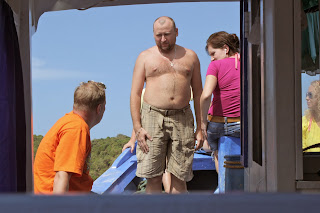 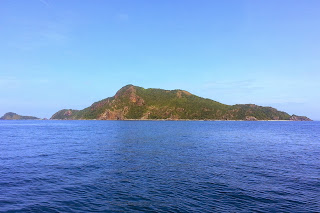 Pangadiauan Island - an all too familiar view

After about half an hour of smooth sailing I heard the engine once again go silent and knew this was going to be an interesting ride. They played with the engine some more, this time rigging a rubber hose to the leak which seemed to work much better than the plastic bag. A few minutes later we were on our way again, but not for long. The next time we stopped there was no playing with the engine, but instead, the anchor was dropped, oh shit. The best part was that during this whole ordeal no one was telling us anything, I mean it's not like we had anywhere to go or anything we could do, but it wouldn't hurt to be informed a little bit.  Seeing as it was now obvious we weren't going anywhere a few of the more outspoken passengers decided to inquire as to what exactly was going on.  Apparently, we had run out of oil but our boatman had called the coast guard from Linapacan, the nearby island, and they had promised to bring some for us. The two girls from London appeared to be a little upset and insisted that they call for a new boat to be brought to us, I thought this sounded like a fine idea but knew it was useless.  We were only halfway into our journey meaning it would take at least four hours for another boat to reach us, and thanks to the reviews I read, knew this wasn't likely anyways. Oh, and I almost forgot, the icing on the freaking cake - our toilet pump was broken. 30 people, a broken boat, 13 hours and no toilet, oh yeah things were getting interesting. 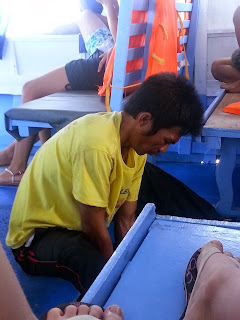 Until this point I had completely avoided speaking to anyone on the boat but decided i'd break out of my shell, mostly for the benefit of figuring out what was going on.  I realized that many of the passengers from the back assumed I was with the Russian crew of 16, but I was quick to correct them on their mistake.  The two girls from London were friendly, if not a little high strung; there was a very opinionated woman from I forget where, and a lovely couple from Canada, who were just trying not to hurl, thank god I grew out of my seasickness.  After an hour of waiting we realized the half hour estimate for our oil delivery was on Filipino time.  The Russians decided to bust out some tunes, starting with the ever so appropriate "Don't worry be happy" and seemed to be having a merry time.  After floating in the sea for nearly two hours we finally had our oil, delivered by a tiny little man in a kayak, and were ready to go. As the sun was setting on the horizon our crew pulled the anchor and sent us on our way, ensuring us that the engine was fixed.  Honestly, during this whole ordeal my biggest concern wasn't the boat, the oil, other people or even when we'd be getting to Coron, my mind was on food - I WAS HUNGRY. It's amazing how good food can taste when you're really hungry, I treasured that small packet of crackers and styrofoam cup of Coke I was handed for dinner. 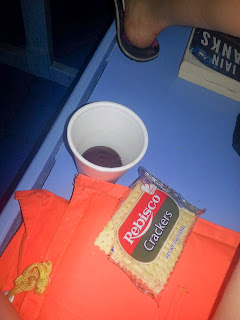 I'm pretty impressed with myself for staying so positive throughout the whole day, I guess I really have learned to go with the flow.  Actually, most people on the boat seemed to stay in high spirits, it's not like we had any other choice, unless you wanted to swim to one of those small islands nearby. Thankfully, after our oil delivery, we were able to continue on to Coron without any more problems.  Every time the mechanic opened the floor to check on the engine I held my breath in hopes that everything was okay, and thankfully it was. Throughout my travels i've come to learn that i'm afraid of the dark so was a bit on edge as the sun set, but I got used to it.  The stars and moon came out and I couldn't have asked for a more beautiful scene as we neared Coron and it's outlying islands.

When we finally got off the boat it was just after 10pm, 13 hours after we left the port of El Nido, only five hours late, no biggie. My hunger problem was solved as they handed us a small box of pancit bihon and a bottle of water, FOOD.  As I stood there relishing in the fact that we had made it and I had food, I heard a voice mutter "Well that was fun".  I turned around to see Ian, one of the other solo passengers on board, and my new friend for the next few days. I guess everything happens for a reason, doesn't it?

Posted by Stephanie at 2:13 PM