As it always does summer began to fly past us and before long we were already entering August, Hue was wrapping up his summer ESL courses and I was itching to leave the country. I tried a few times to make plans with Hue but it seemed he was always busy with studying or our schedules just didn't collide.  Then one day his response was 'I have the final class trip' and I went out on a limb asking if I could join.  I had fun hanging out with just him so wouldn't tagging along on an ESL, end of summer, multi country mash-up be that much more exciting? The correct answer is yes.  Thankfully his teachers didn't mind, as long as I was registered and paid my fees, so that's how I found myself on a school bus filled with teenagers from around the world, and a few teachers from UWM.  Once again I fell in with the students feeling a sense of belonging more there than with the staff, and many of the students being Korean, I felt like I was back. 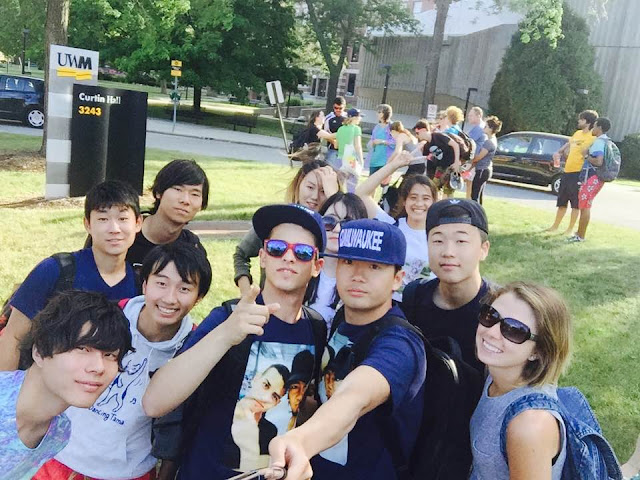 The trip was to Kettle Moraine State Park and was supposed to be filled with hiking, boating, a picnic and other outdoor activities.  Soon after arriving though I realized most if not all of this was optional, more or less it was just a day to have fun.  I had yet to meet any of Hue's ESL friends but that didn't mean they didn't know about me.  While waiting for the buses in the morning I met a few students and the resounding response was "ooooooh, YOU'RE Stephanie!" it was clear Hue had shared a bit about me and I couldn't have been happier hearing so.  The students came from all corners of the world, but I quickly fell into the Asian clan, Korea, Japan, Taiwan, Thailand and Vietnam, all represented.  On the bus the fun continued, I was complimented on my Korea ability, commended for my attempts to accept and learn the culture, and thanked for welcoming my new friends.  Given how fun the first few hours were going I had high hopes for the rest of the day. 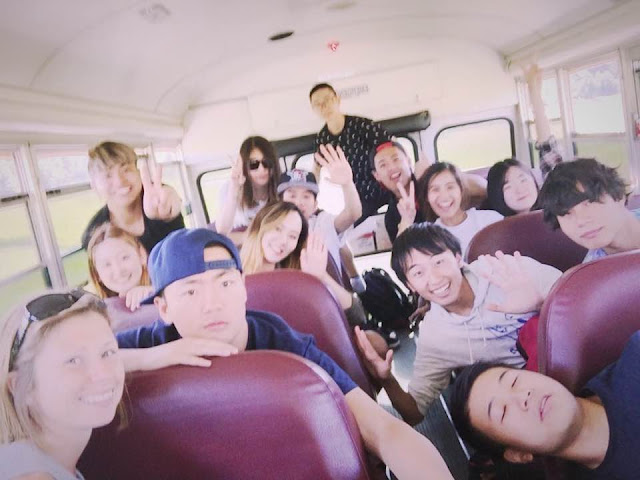 We arrived and almost immediately it was time to eat, the spread of American picnic food was a sight even for me to see, so I was interested to see how the students would take to it.  Chicken, cheeseburgers, pasta salad, taco salad (this one was new to even me), fruits and veggies filled the tables.  Everyone was encouraged to eat a lot, one instruction no one had a problem following.  When I asked the students if they missed food from home the moans, groans and sighs that erupted were probably heard from the other side of the lake.  The Koreans were soon lamenting Korean fried chicken, and although we were eating some fairly delicious chicken, I felt their pain. Another consensus was that Diet Coke sucks and root beer is weird, I get the second one, but Diet Coke?

I thought we would all be ushered onto a group hike at this point, but thankfully we were released to explore on our own. There were options of swimming, boating, playing soccer or just relaxing.  I followed a group to the boat dock but chose to pass on jumping it, instead leaving it to the boys to explore.  It was clear a few of these students had little to no water experience, especially the one from Africa who was almost persuaded to take off in a canoe with no paddles.  I was slightly concerned for the wellbeing of a few, but thankfully I wasn't actually in charge.  While waiting I spoke with a few of those who were, one of whom was genuinely confused as to who I was, I couldn't be a student as my English was too good, but I wasn't a teacher either?  I had to explain my connection to the group on more than one occasion throughout the day, but each time took a moment to appreciate how unique but also awesome it was. 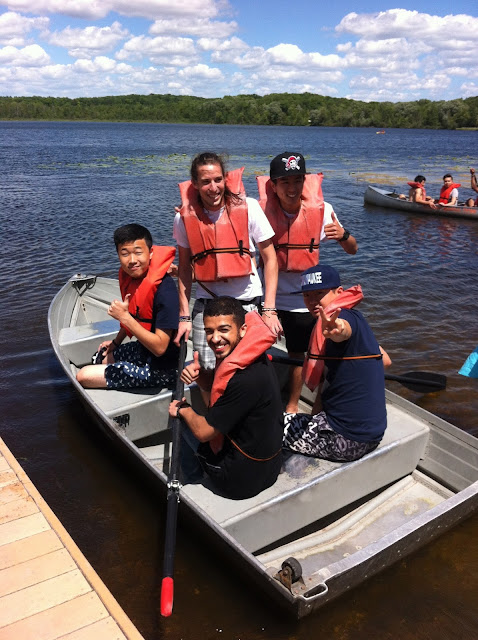 The boys decided to go swimming but there was no way I was getting in the lake, temperatures were no where near high enough for me to partake.  Instead I grabbed my Kindle and sat on the beach, enjoying a little bit of quiet time, still entertained from afar.  Spending the day with this ESL community was a breath of fresh air after a few months at home, away from my travels, teaching and exploration.  I met a teacher who has lived in eight different countries and another whose daughter is enrolled at an international school, a place where she's exposed to dozens of different languages, cultures and looks.  Most importantly though I met the students, kids that left the comforts of their home town to explore America, finding new friendships, experiences and of course the English language in Milwaukee. These people both inspired and reminded me that living in Wisconsin doesn't have to be as simple as that, there's always a way to bring the world back home.

For now, I'm not ready to settle into the comforts of [any] home, my feet are still itching to leave as soon as I arrive, and there's too much left in this world for me to see.  To be honest, I'm struggling to see through the eight months I have remaining in Korea, however I believe once the winter skies part things will improve.  It is after all, a country I've fallen in love with time and time again, a place where each day brings something new, I learn from my students just as often as they learn form me, and I'm free to discover, improve and enhance myself. 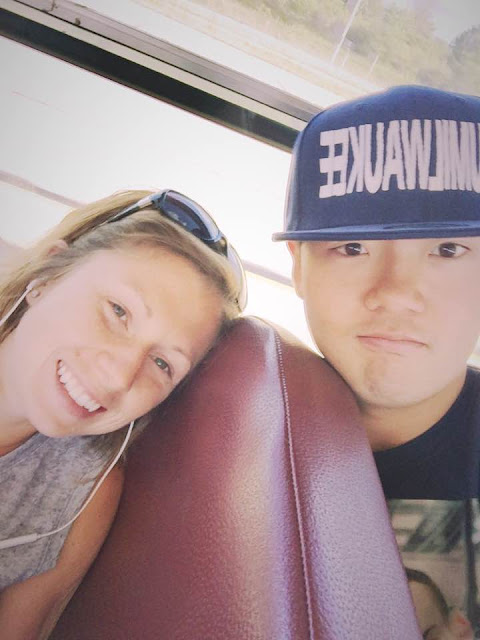