I've completely failed at sharing stories of my adventures, struggles and other details of my second bout in Korea, but that's about to change. It's been a while since my last post, but I'm guessing this one will draw a little attention.  Last weekend, I ventured up to Seoul to meet an old High School friend, Anna. Coincidently we met each other only two weeks ago, when I traveled to Thailand and was able to see Anna in Bangkok, where she's currently living and teaching.  This time around though it way my turn to play tour guide, and I can proudly say I did a fine job of it.  I spent yet another weekend falling deeper in love with this country.  Saturday night we accomplished a full night out in Gangnam, thanks in part to our awesome Couchsurfing host, full of Korean BBQ, Soju, Beer, Chicken Butt, and of course Noraebang (Karaoke).  Sunday followed suit, despite a creeping headache, with more delicious food, a visit to both the Bukcheon Hanok village and Ihwa Mural village, a stop for coffee near The Blue House, quick breeze through Gwangjang Market and ending it all back in Gangnam.  Needless to say we were in bed early and before long Monday morning came and it was time to say goodbye, with me heading back to Andong. Thoughts of "I don't want to work today" were swimming through my mind as I arrived, and as luck would have it I got the day off, but not under the best of circumstances. I got to spend the afternoon at Andong Hospital, after a car decided it'd be fun to knock me off my bike... 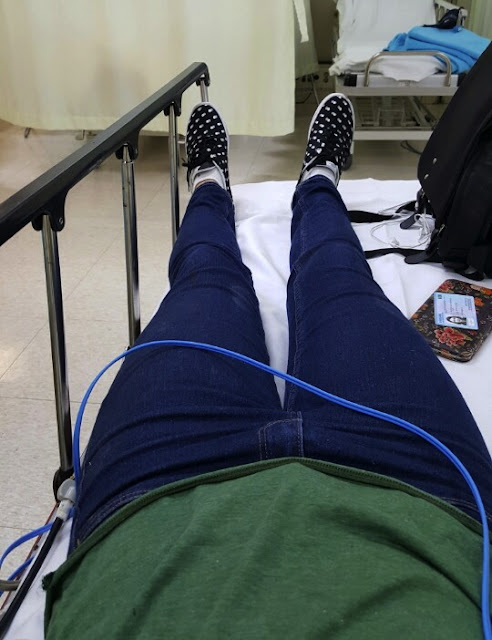 I sent this picture to my friend, accompanied with a "Don't freak out, but I'm in the hospital".  She definitely wasn't expecting "I got hit by a car" to be the next line of that conversation, and I think I had shock of my own typing it.  I was halfway home, thinking about what I'd make for lunch and debating if I had enough time to fit in a workout before having to go into school. Little did I know my day week were about to take a turn.  The "How did it happen" - I was riding along the sidewalk, loving the day, not considering there may be a car sneaking out of the upcoming alleyway, but little did I know.  Halfway across and "Oh Fuck" sets in, seconds later I'm rolling from hood to ground with immediate thoughts on "my teeth" (for those unaware they've broken before).  As fast as I was down I stood back up, bringing my hands to my face to meet streaming blood.  I knew, without having to check that at least one tooth was broken, and a quick brush from my tongue confirmed this.  The driver emerged from his car expelling "I'm sorry's", but I was too busy screaming to care (more out of anger and frustration than pain).  Two workers emerged from the neighboring auto body store and were clearly shocked at the scene they walked into.  I was offered tissues to soak up the blood while the driver got the police on the phone, at which point I realized I'd be needing some help and immediately thought of Sam (my boss).

His cheerful voice made me laugh as he asked "How are you?" I wasn't sure how to intro this one but muttered a "Ummm I'm okayyyyy, but I just got hit by a car".  Thankfully he wasn't to far away, still on his way back to Andong from Incheon, and assured me he'd join me as soon as possible.  Minutes later the police and paramedics arrived, talked briefly and then ushered me into the ambulance, saying we were headed for Andong Hospital.  Of course no one spoke English and the paramedic by my side apologized for such in the most endearing way (he was cute too, which helped).  We soon arrived at the hospital where I was guided to the ER and quickly ambushed with doctors, nurses and questions. I'm thinking I should sign up for the TOPIK (Test of proficiency in Korea) test after passing this surprise exam with flying colors, still bleeding and in a bit of shock.  I was taken for a head CT and full body x-rays to confirm I didn't injure more than my face, and as I was rolled out of the examination room heard a "Are you okay?"  Upon hearing Sam's voice I felt a flood of relief, knowing he would help to sort everything out, but couldn't help laugh in response to his question.  The driver and insurance man arrived soon after, at which point I was especially grateful for Sam's presence.  Thankfulness ensued when the man who hit me expressed great sympathy and told me not to worry, everything would be taken care of.  Until this point I hadn't really given much thought to the monetary complications of this whole mess, but it was nice to be told not to worry. 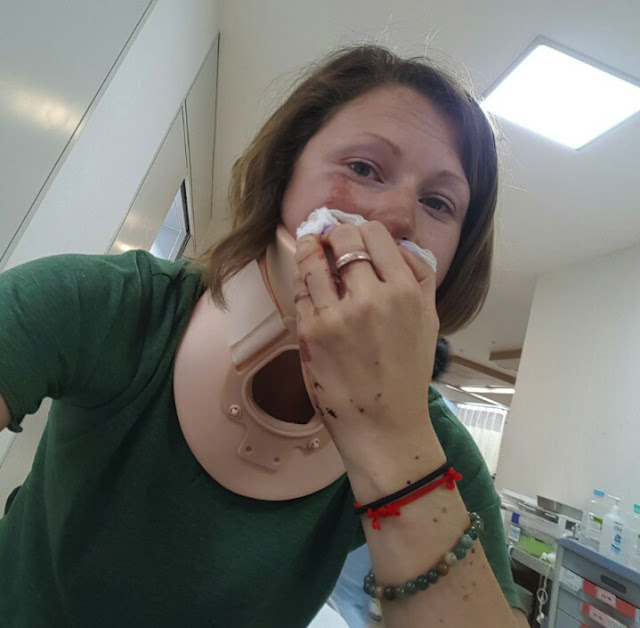 Back in the ER I was on hold for a slew of drugs, an IV (my first) of antibiotics, a tetanus shot and one other mystery (no one told me what that one was for), both of which were administered on the back side - I'm telling you the fun was never ending on Monday.  The news came back that my head and body were okay, so the only thing remaining was sorting out the mess that was my face.  I knew Sam had to get to school and was okay with being left alone, but the doctors all looked worried at his departure, how would they communicate with this 외국인? Eventually I was wheeled up to the dentistry clinic for an assessment of the injuries, this was the point in the day I realized I'm too optimistic.  While being carted around I had two realizations: 1. I should take pictures because I'm totally going to blog about this and 2. (when catching my reflection in the elevator doors) Most people would probably be panicked or scared, alone in a hospital where hardly anyone speaks English, thousands of miles away from home, but I was oddly content with it all.

I stumbled through Korean with the receptionists and assistants, doing surprisingly well for the state I was in, but was pleased when the dentist spoke beautiful English.  The visit seemed unnecessary for the most part, as he told me I had chipped a tooth (no 2) and that I should go get sutures and then we will fix the tooth later.  The highlight though, was when he reached for the tweezers on the examination tray near by, my mind quickly started wondering what he could he could be doing as he approached my face.  I couldn't feel much, but when he pulled them away and showed me a chuck of my tooth that was lodged in the cut I once again had one reaction, laughing - at the absurdness of it all.  A little more waiting and it was back to the ER, escorted back to my bed to wait for being stitched up. There is some amusement in being the only foreigner present as it seemed every person in that room knew who I was and it was also easy to tell when they were discussing my situation, hearing "스테파니" float through the air. 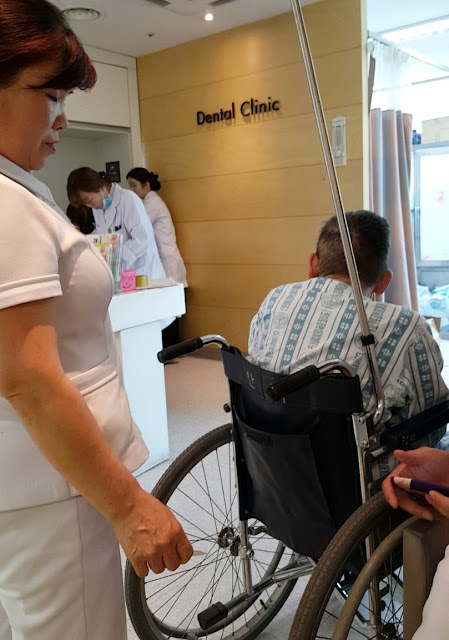 Before too long I was rolled over to the operating room where a flurry of doctors and nurses fluttered around me.  I think maybe they weren't sure who would get the honor of stitching up the foreign chick, but eventually I had two by my side and it seemed we'd be starting the process.  Cleaning the wound wasn't lovely, but part two was by far the worse.  It wasn't until my squeal of pain that I heard a "아파" from the doctor, confirming that, "Yes, this will hurt".  I wasn't even sure what they were doing, but as my mouth began to numb I realized it was the shot(s) of anesthetic that sent me squirming.  My eyes were covered but I sensed that there was a change in doctors at this point, the new one mumbled some concern of my being a foreigner, but the other assured him, "No, she speaks Korea well"  a nice confidence boost in my vulnerable state!  Once numb the process was easier, only nasty when I could feel the sensation of thread being pulled through my lip, both outside and inside. In total I received 7 stitches outside and 4 inside my upper lip, and just like that I was done. I had to get Sam back on the phone for the final instructions of what was to happen with me, but was ultimately free to go.  I was sent home with a slew of pills and instructions to visit a plastic surgery clinic the following day to have the wound cleaned and re-bandaged.

The friendliness of the day wore off as I exited the ER. Waiting at the pharmacy desk the receptionist seemed only annoyed with my presence and the Pharmacist was also less than eager to explain things to me.  As I walked away with my drugs I was left slightly confused, "I'm supposed to go home now..that's it?" but sure enough, that was it.  I grabbed a taxi (one of the less appealing parts of being hospitalized alone) and was home within minutes, ready to let the days events sink in.  Ironically enough I got my wish of "Not wanting to go to work today" but I was anything but grateful for that. Sitting at home alone in a pity party, 11 stitches in my face and bruises across my body didn't beat dealing with minions all afternoon. The evening did improve though, first with an hour long skype session with a best (really concerned) friend, followed by a visit from an equally concerned boyfriend (toting ice cream), and ending with a skype call to the family (obviously concerned).  Everyone's sentiments matched mine, for their concern and sympathy at the situation was matched with, if not exceeded by, relief that I was not more seriously injured. 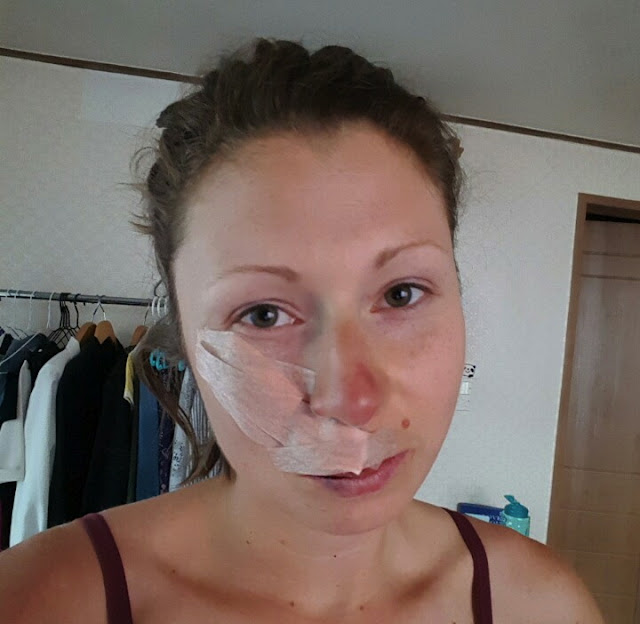 This week has definitely started on a different foot than I ever dreamt it would have, but through it all I've been fairly positive. The shock has worn off, but Tuesday I woke up with realizations that the headache was just beginning. Dealing with insurance, police and doctors is how I'll be spending the next few days, if not weeks.  Thankfully, I have an amazing boss who is on my side and willing to spend the time to help me through this all.  There's more details to share, but I'll save that for part two, for now just know that I'm okay, mostly in part to all of the amazing people I have in my life.
Posted by Unknown at 2:14 PM