Feeling better and ready to leave the confines of my house I was happy to have a boyfriend with a weekend (finally) off work, and was able to get out and explore.  Despite waves of boredom or cabin fever I do get really good at being a hermit, finding comfort in my habitat, but I was happy to get out on Saturday.  After a brief meeting with my old friend (enemy) Soju, Friday evening and lots of needed catch-up time with the boy, it was a late start on Saturday.  After waking up he was busy on his phone, no not messaging or screwing around on social media, rather searching for where he was taking me for the day.  I asked twice but got only vague answers, leaving me clueless but surprisingly content.  I usually like to be the one with the plans, so it seems I’ve changed a bit recently?

We finally ventured out around 1pm for lunch, which neither of us had an appetite for (I blame Soju – for everything).  I asked where we were headed next, but the only answer was “Magic.”  He asked if I was okay to drive (ride) for two hours because he wanted to take me to a temple in 밀양 (Miryang), a place I’d never been.  I was fine, after all car naps are always an option for the passenger, but my concern was for him having to drive there and back.  He said no it was fine, so off we went, stopping in 군위 휴계소 for a coffee (and batting cage practice, much to my dismay) before continuing on our way. I asked why this temple we were headed for was ‘magic’ but he told me I’d see once we got there, only hinting that there were three reasons behind his claim, and fish being significant. 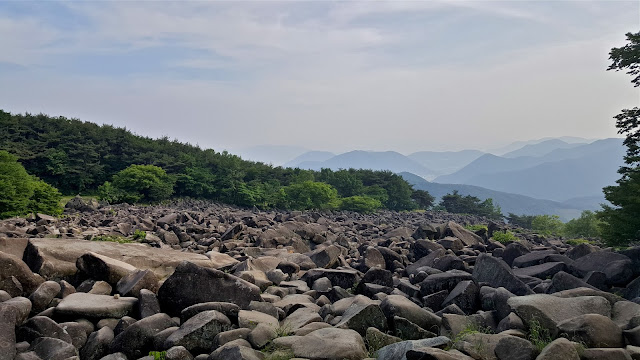 The drive passed quickly and we were soon in Miryang, apparently a place chock full of temples.  The first stoplight we came to had sign postings for at least five different temples, but likely double that amount. We drove a short ways to 만어사 (Maneosa), including a steep climb along old roads into the mountain.  As we approached there were loads of rocks blanketing the hillside, almost as if an avalanche had recently occurred.  재훈 (Jaehoon) explained to me that these were the fish he had referenced and were significant to the temple, Maneosa meaning “10,000 fish”.  The parking lot was nearly empty, and from a first look (aside from the ‘fish’) it didn’t seem that there was much on offer, but then I remembered the ‘3 magic’ promise.

I was first instructed to read the signboard introducing the history of the temple, learning the story behind its creation, naming and significance.  In short the temple was a gesture of thanks to Buddha from King Suro (42A.D. - 199 A. D.)after the Buddha saved the Gaya Kingdom from misfortune that had fallen upon it. The problems were due to a forbidden relationship between dragon Okji and a Nachal (Greek siren) and came in the form of thunder and hailstorms.  We took our obligatory pictures in front of the gorgeous view and then 재훈 began searching for a small stone, for what I had no idea. Equipped with his stone he guided me into the stone pit, walking down a few rows before he found a place he was satisfied with.  He then proceeded to start taping stones, the first of which sounded merely like two rocks being beat together, but the next was quite different.  Rather than rock it sounded like he had tapped a hollow metal container, a faint high-pitched echo rang from this stone(?).  Apparently there’s no explanation behind the noise, but I was equally impressed, entertained and intrigued. 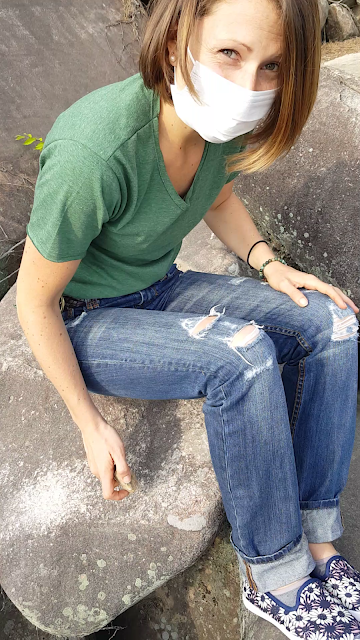 I was next led to one of the temple halls and told the second magical thing was inside. As we entered all I saw was a massive rock, definitely not what I was expecting and much different than the traditional Buddha statues contained inside these temples.  I was not yet impressed, but knew there had to be a story behind this rock so waited for 재훈 to explain.  I didn’t get a full history lesson (probably better that I didn’t), but he told me that the rock cries.  At first I was confused, but then looked up and saw dark streaks coming from the top (head) of the rock which could definitely be interpreted as remains of the rocks tears.  He said the rock cries when Korea is going through difficult or hard times; as mythical as this may sound I decided to take his word for it. 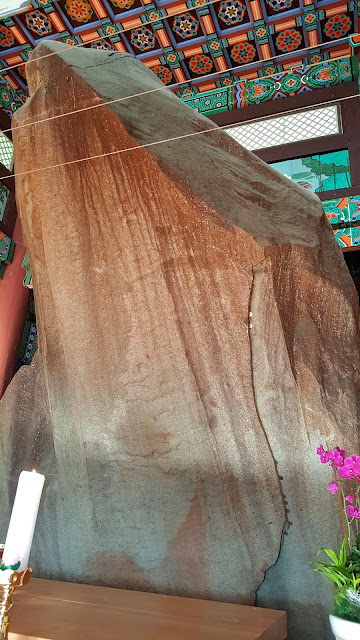 I was so distracted by the beautiful views and impressive sculpture of Amita-bul (Buddha of the western paradise) that I almost forgot there was still one more piece of magic for me to discover.  We walked back to the central area of the temple while 재훈 explained; he first told me I must prepare a wish, some dream or desire.  He then explained that there was a heavy stone I would have to lift; I was supposed to lift it once and upon setting it down think about my wish or dream.  Once set with my wish I could then lift the stone again, but maybe it would be impossible.  The legend says that if you are able to lift the stone on your second try your wish will not come true, but if you can’t, well then congratulations.  While I mulled over my wish a Korean couple came by and the man decided to give it a try, struggling greatly to lift the stone.  He gestured for 재훈 to give it a try, maybe assuming he also wouldn’t be able, but he passed saying he’d done it once before.  Watching this man I figured I too wouldn’t be able to lift the stone, but I managed to get it a few inches off the base.  After setting it back down, 재훈 told me to think of my wish and try again. Unsure what would happen I was surprised when the rock felt like a ton of bricks, not budging in the least when I tried lifting it. 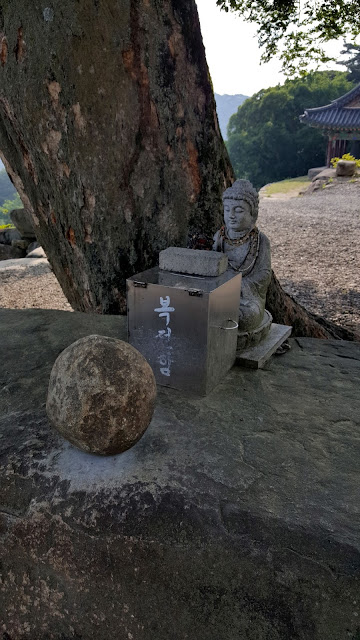 After living and traveling in Asia for four years the novelty of visiting a temple has began to wear off, but this one sang a different story. I guess it’s only the novelty of the temple that has worn off, shifting my reason for visiting.  Before, I was interested in the architecture and history whereas now I’d rather just enjoy it.  No matter the country or setting I’m always able to find a moment of peace when visiting a temple, unless they’re overloaded with tourists, then it’s a bit hard. Aside from this though, temple visits take on a whole new meaning when you have someone that speaks the language or knows the history and is able to explain it to you.  I remember the first time I really appreciated a temple, while traveling in Japan, simply for the fact they provided an amazingly detailed information pamphlet explaining the significance of everything inside.  Similarly my second experience at Angkor Wat greatly contrasted my first, as I decided to pay the extra money to have a guide lead me through.  Even more reason to make an effort in building relationships (friends, boyfriends or even students) as these people really will help to open your eyes to the secrets of your [new] home.
Posted by Unknown at 5:42 PM