So yeah, learning to teach is a bit rough - but no one said there was no reward.

After the first day of school we had a staff outing - dinner and drinks on the schools tab.  We went to a blow fish restaurant near the school. Now if you're like me you're thinking "isn't blow fish dangerous to eat?" (cue Simpsons episode?).  Yeah, that's what I thought but apparently not here - they know what they're doing and how to cook it.  We had it both deep fried and in a soup - pretty good but probably not my favorite.

Then last Wednesday the principal, 지경진  Ji gyeong gin asked what my favorite Korean food was and if I would like to go to dinner. I of course had no plans so yes, i'd love to go. The Chinese character teacher,  임동향  Im dong hyang and biology teacher 강병권 jang byeong gwon joined us for Galbi (korean bbq - again cooked at your table over hot coals) various side dishes, rice, and of course some Soju. 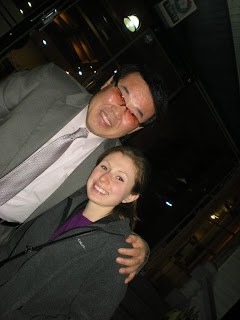 After dinner the Principal insisted I experience some real Korean culture so we made our way to the 노래방noraebang - Korean kareoke room.  I didn't realize that you get your own private room, complete with a big screen TV.  Order a few beers, popcorn and select an outfit from the hall and you're set for a great night. See my principal below who is clearly having a great time.  I already love this guy! 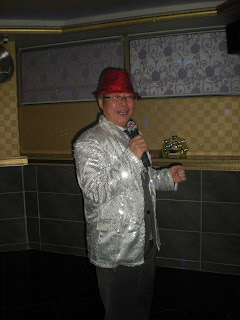 Clearly my principal wants me to get ALL aspects of Korean culture because on Sunday he invited me to join him at Church. Being in Korea and new to the school I didn't want to say no to the principal - despite my lack of a religious background. I was glad to find out his Daughters friend Min Yeong Im would be joining us. She studied in the US during High school for two years so her English is very good.  The service was really nice, not too long and during the songs I practiced reading Hangul - still feel like i'm at the level of a 5 year old but i'm working on it!  After service I had tea and rice cakes with some of the staff and lunch with some of the other college age kids.  They were all very nice, although I could only take part in about 5% of their conversation. 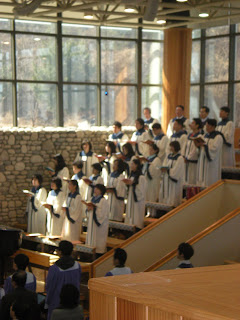 I came to find out that my principal was in the choir (Top left), I should've guessed based on his performance at the noraebang. Due to this he had to stay for the second service which was after lunch.  Min Yeong and her family invited me back to their house while I waited for the principal to be done - this was so nice of them and completely unexpected.  They live nearby in Gumi (which is also where the Church was).  I went back and Min and I watched Step Up 3 and hung out until the principal was done.  I kind of guessed Church would turn into an all day activity so I'm glad I got a head start on my lesson plans the afternoon before.

So far in Korea I've felt like a celebrity. The students are eager to meet me and talk to me, all of my teacers are concerned that i'm not eating enough - always feeding me and offering me new treats, and the principal is sure to invite me to whatever he feels necessary. Once the weather warms up we're going to hike Gumi Mountain.  Although I live in a small town I really have no worries that i'll be bored.

Stephanie
Posted by Unknown at 8:08 PM