It's kind of amazing how such seemingly simple tasks become your greatest accomplishments while living in a foreign country - especially during the first few weeks.


The first weekend here I had made plans to meet my friend Sara at the Waegwon train station so that we could go to Daegu and meet up with our teacher J.  At the time I really had no idea how to get to the station but was determined to figure it out - on Friday I ran into a girl from America who is teaching at the elementary school near my house. She told me that bus 111 should take me to where I needed to go.  Success! I made it to the station, met up with Sara and off to Daegu we went. 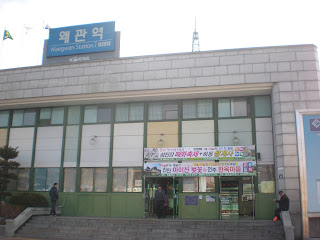 J met us at the station and led us around town - it was still early so we started by looking around a few stores, made a stop at Starbucks and then made our way to Seomun 서문 market. It's a huge traditional market selling pretty much anything you can think of. Socks, jewelry, purses/backpacks, produce, fish - the list goes on. 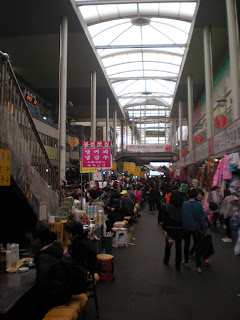 There are also many vendors there selling food ready to eat. J wanted to show us some traditional dishes so we decided to have lunch here. We started with 오뎅 [odeng] which is a fish cake - kind of like a thick noodle simmered in a fish broth with green onions and served on a sick.

Next for lunch we had 3 variations of 칼곡수 (kalguksu) which is a noodle dish (think Raemen but 1000 times better) with various vegetables - usually zucchini and a sesame broth. Served with a side of Kimchi and hot red pepper paste. I added a small spoonful as it's pretty spicy - the guy across the table from me had a red broth he put so much in. I'm sure by the time I leave here i'll have be able to tolerate any spice. J also wanted us to try a popular desert 호뗙 (Hoddeok) it's a pastry filled with a brown sugar syrup, served hot. So good I forgot to take a picture - maybe next time.  From the market J took us to see her University, it's a beautiful campus. She's currently studying for her PhD and will be coming to the States (likely Ohio) in September. We had some time to kill before the movie (we went to see Iron Lady) so we stopped at the Hello Kitty cafe - yes Hello Kitty is HUGE here. We felt kind of silly but it was worth the visit - i'm not ashamed to play the tourist every once in awhile. 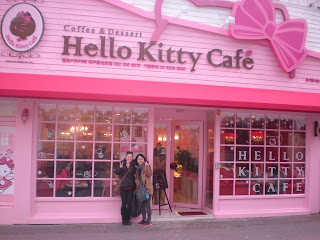 The night ended with a dinner 삼겹살 (samgyepsal) and 갈매기살 (galmaegisal) two different types of pork which are served raw and then cooked on a hot stone right at your table.  You're also given garlic, kimchi and other sides which you can cook with the pork. You then take it and wrap it in lettuce leaves with whatever toppings you desire - one looked like asian coleslaw, more kimchi, soy sauce, onions, etc. It's pretty awesome. Below - Sara (from Indiana) and J (awesome teacher from EPIK orientation) waiting for the meat to cook. 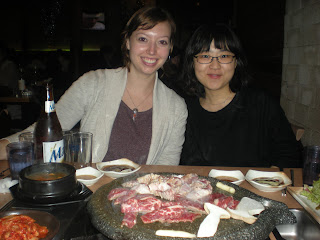 Great first weekend at the new apartment - so glad to have these two living nearby.  I'll update soon on how schools going - for now all I can say is teaching is harder than it looks!

Email ThisBlogThis!Share to TwitterShare to FacebookShare to Pinterest
Labels: daegu