The past week hasn't been all that exciting. After spending St. Paddy's weekend in Daegu with some friends I caught the cold that's floating around Korea. I figured water and sleep would be my cure, and I was right, until I decided it was a good idea to go out on Friday.

I would've been fine had I made my way home that night, however this was not the case.  I decided to stay out with my friends Son and Em, until eh maybe 3am.  The 12 hours between 8pm Friday and 8am Saturday were somewhat of a blur which included walking around in cold wind and rain - not what my cold asked for.  Once home, at around 9:30am saturday,  after my lovely bus ride (would be sarcasm except for the fact that I called Shane and got to talk to him for the first time since seeing him in Nashville so it was bearable) it was back to bed.  I slept on and off for a majority of the day until it was time to meet Delarey (South African who lives in my town) for a round of screen golf.  It's a little hard to get used to, or at least that's what i'm blaming my +45 score on.  By 8 o'clock I was exhausted, my throat hurt and I could barely talk so I was ready to call it a night.Sunday - Wednesday I decided to give myself adequate time to recover. Luckily my 2nd graders were on a field trip all week (to Jeju Island - lucky ducks) so I had more time to relax.  Good thing too because today was field trip day!  Half the first grade students were going to Pohang and half to Mungyeong, with me joining the latter group.


I think I might have messed up because I was supposed to be going with one of my co-teachers and her class (1-2) but I got on the bus with the Math teacher and his class (1-7).  It wasn't a mistake as 1-2 was just playing games all day and 1-7 was going to a coal museum, riding rail cars and theeen playing games for the rest of the day.  We started at the coal museum which I never really caught the name of. The kids basically ran through the museum part of the place and moved on to the outdoor area where we proceeded to take pictures and play some old school games. 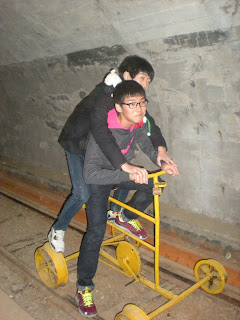 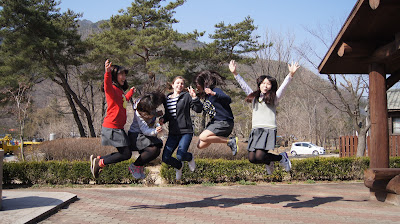 Around 11 it was time to leave and head to the next destination, we were off to ride old fashion rail cars.  I really had no idea what that meant but sounded fun. There's really no way to describe it so i'll let the pictures do the talking. A nice man was giving us instructions, for a good mmmh 3 minutes? The only thing I understood was that the lever next to me was the break for my car - and that's only because of the lovely student seated to my left. I hope the rest of what he said wasn't too important considering I couldn't understan a damn word. 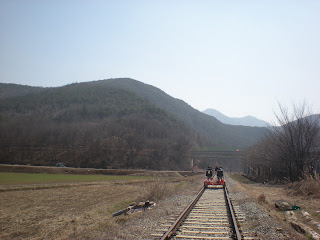 After our ride - which was actually a lot of work, it was time for lunch. We drove for close to a half an hour before arriving at what I thought was our rest stop for lunch.  All of the students got off the bus carrying their Kimbap and various other snacks they had packed.  No one told me to bring a lunch, but thankfully my co-teachers are like angels sent from Heaven.  They take care of me like a lost puppy found on the side of the road.  So, we start walking up this winding road (mind you were in the middle of a mountain).  After passing multiple restaurants and picnic areas I begin to wonder where the F we're going. 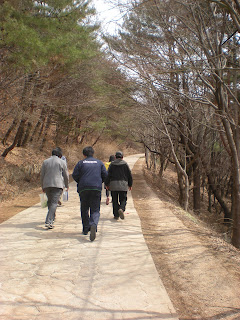 By this point I was a bit peeved, I thought we were breaking for lunch, not climbing a mountain. Then again, I was wondering what the driver and teacher were announcing to the students for a good 5 minutes before we got off the bus. Maybe they were explaining this journey we were about to embark on, but no one felt it necessary to inform me so you know, when in Korea - roll with it.  Alas, a big stone with some crazy writing on it - no picnic tables, nah not even a garbage can, but this - this is where we are going to take a break for lunch. 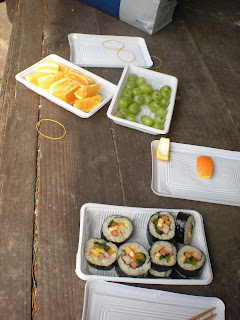 So by this point I realized that I had no idea what the day held for me. I thought we were breaking for a quick lunch and then meeting up with class 1-2 to play "running man".  Nope, wrong again, we'd be playing right here, in the mountain.  Basically there's two teams, the "horses" and the "spys". Horses get like 5 minutes to run away and then the spies have to go find them - wearing bells on their shoes so that they knew we were coming (yes, I got to be a spy). 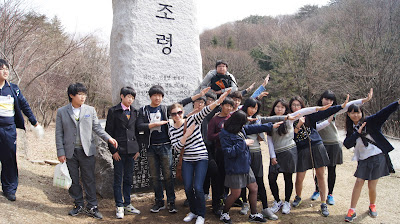 During the bus ride home I began wondering what class 1-2 and the students who went to Pohang did all day.  I realized that our field trip didn't seem to have much of a purpose, were they all this way?  Usually in the states your field trips coincide with something your studying, a cultural event, holiday, something.....didn't seem this way today.  I mean there was the coal museum, but I don't think one student stopped at an exhibit for more than 5 seconds - and that was just to snap a quick picture.  I feel like today really was just a play day, a break from the never ending hours these kids spend in the classroom.  Either way, I had fun and I hope they did too.

Sorry that post was about 2209384 miles long - kind of how my day felt. It's 9pm and I'm ready for bed.  One more day and then it's off to Busan to see some family! I am so excited - I'll be meeting up with  Darren, Joan, Alivia, Claire and Adam for the weekend.  As Alivia said it will be a crazy day, but I wouldn't have it any other way.