Saturday night after getting into our rooms we spent time catching up and getting settled.  Everyone was tired from a full day of travel - especially Adam and Alivia who I think we're still feeling some of the effects of jet lag.  We all showered, unpacked, caught up with each other, showered and went to bed. 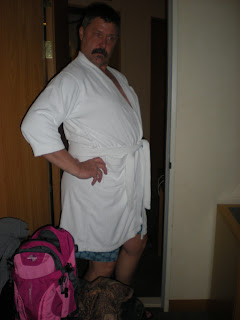 Sunday morning we were set to meet our guide Harriet (Park, Inhae) at 10am.  We first walked down the street for breakfast, at least for Alivia and I who opted for yogurt and a bagel, the rest went with  chicken wings, burgers and fries from Lotteria.  After we made our way back to the hotel but first stopped at the beach to take a few pictures (and let Claire and Adam burn off some energy). 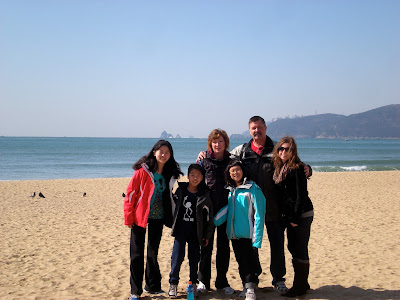 Sitting in the hotel lobby we got an update from the staff that Harriet was running late and wouldn't be there till 10:30. Not the best news but we could deal with it, then 10 minutes later "very sorry, but we had a call - she'll be meeting you at 11:00, is that okay?" um do we have a choice? 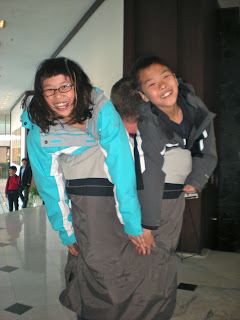 We were all a bit peeved so we decided to give Harriet a call and see what the deal was.  We told her we could just get a taxi and meet her at the fist market rather than sitting around in a hotel lobby for the next hour.  After a few phone calls and repeated attempts at explaining our plan we were in a cab on our way. Again - this is where my phone came in handy.  Upon arriving at the market we had to play phone tag for a good 10 minutes to figure out what entrance we were meeting at - it also didn't help we both kept moving. Alivia was right, they teach you this - first lesson: stay where you are!  Well, it was hard to be mad at Harriet for the delay, once again one of the nicest people I've met. She was beyond excited to show us around her how town and very proud of Joan and Darren for taking the kids on this trip.  We spent some time walking the aisles of the market - again let the pictures do the talking. 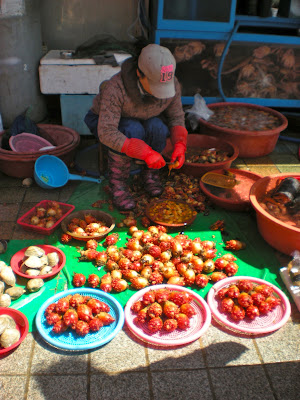 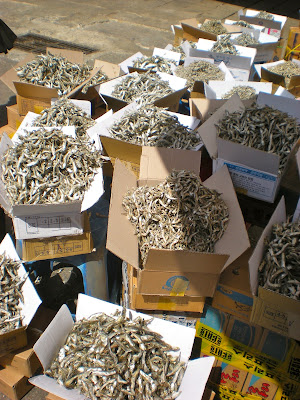 After the market Harriet still wanted to show us her church as well as her house, we made a quick stop to both and then it was time for lunch. We didn't actually attend a church service as we were too late for that, but there was an English service/class still in session so we popped our heads in for a visit. The service was intended for expats from Sri Lanka, The Philippines and other areas who are currently living and working in Busan.  Seeing as I could probably count the number of times i've been to church on one hand (most of which being in foreign countries) I really didn't have much to compare this too. However, even Alivia and Joan passed a few eye rolls - I think some of the problem was the Korean/English "lost in translation" and I felt like a 5 year old the way they were talking.  (Beau - I can say if you were in that room you probably would've had to get up and leave before bursting out in laughter or calling BS, but hey, to each their own). Harriets home was really nice, she even invited me back for dinner, church and more touring while i'm living here! I'm telling you everyone is so nice - always wanting to feed you and take you under their wing, i'm not complaining.  Next stop, lunch! I think we were all pretty hungry by this point and Harriet wanted to take us to a (famous/popular - as I was later told) Galbi restaurant (korean BBQ).  We sat traditional style on the floor - which despite my yoga practice and small size I cannot handle for long periods of time.  I've already had multiple Koreans comment on the fact that I need to change positions multiple times throughout dinner.  I can only image what Darren was going through as we sat there for close to an hour - esp since you couldn't stretch your legs out in front of you at this table - but the food was awesome! 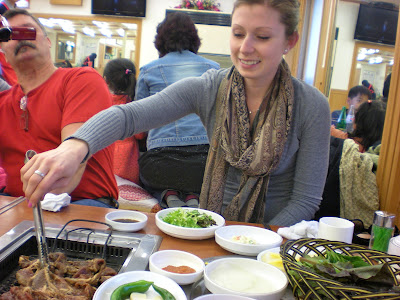 After lunch we headed to the international market where they sell all kinds of stuff - food, clothes, trinkets, junk, bags, purses, etc. etc. It was interesting to walk through but I already had a full backpack so I wasn't really in the mood for shopping.  Alivia and Claire picked out some souvenirs for their friends back home and Adam almost bought an Angry birds toy - but for $20 we decided it wasn't quite worth it.

Unfortunately Joan had a bit of a rough stomach - not sure if it was the water or some food so we cut our touring a bit short and decided to to head to the station for some coffee before it was time for me to leave.  Once I told Harriet that I had to catch a train back to Buksam she took me under her wing as baby bird and made sure that I got there in time.  I'm so glad I got to spend time with everyone and I wish them the best of luck in the rest of their trip throughout Asia. I'm sure i'll miss some great times by the pool this summer and of course the hectic Almquist get togethers and holiday parties but I know we'll pick up right where we left off when I get back.

Tomorrow it's off to Seoul with my friend Son for some birthday celebrations and the LMFAO concert  - more to come soon!