A few weeks ago I taught the expression "April showers bring May flowers".  The kids understood the meaning, however it didn't translate well as rainy season here is summer, unlike the April showers we have at home.  Spring arrives here just in time to cure you of your winter blues, this is the time to catch the beautiful cherry blossoms [벚꽃]. Literally, you need to catch them before their gone, the blossoms tend to bloom during the first few weeks of June (depending on location) and are usually gone within two weeks.  I was in luck, my friend Son was planning to stay in Gyeongju for the weekend to explore and invited me to come along.  Gyeongju was the capital of South Korea during the Shilla dynasty so there is a ton of history and lots to see there.

Once I arrived in Gyeongju I was picked up from the bus terminal by Son and one of his co-workers, who had offered to drive, ideal as our alternative was a 40-minute bus ride, likely standing and sweating (as we did on the way back). As soon as we arrived we were surrounded by the beautiful cherry blossoms which of course meant that it was time for some pictures.


Bulguksa was originally built in the 8th century during the Silla Kingdom period, and is regarded as a masterpiece of Buddhist art, also named a world heritage site in 1995.  The temple is huge, every time we turned a corner there was another thing to see.  The entrance is 33 steps high which corresponds to the 33 steps to enlightenment. 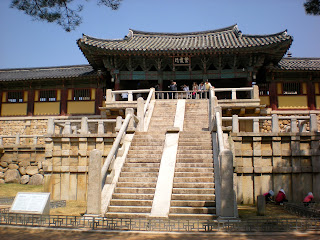 After the temple it was time for lunch, we opted for Jeyuk Bokkeum "spicy pork". This is actually one of my favorite meals here and we have it often for lunch at school.  You take the spicy pork/vegetable mixture and put it with a little rice, garlic or any other side dishes and wrap it up in a lettuce leaf. Yum! After lunch we were set for the next leg of our adventure - Seokguram Grotto (another world heritage site) which as Son told me, is about an hour and a half hike from the temple. We wanted some nature, good weather, and scenery so we decided to the hike as opposed to taking a bus.  We didn't see any directions so we just started up the road - bad idea. 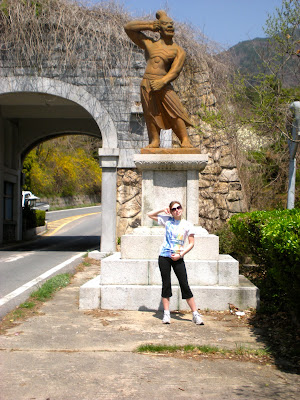 After walking up this winding road for approximately an hour it felt like we were getting nowhere.  This couldn't be the path, but we were sure the road would lead us there eventually, we just didn't know how long that would be. We joked about hitchhiking (not really sure if that's acceptable or common here) when a car pulled up beside us and asked where we were going.  After hearing our destination their only response was "ah get in".    Not only were they giving us a ride, but as soon as we got in the car they offered us oranges and yogurt.  They weren't even going to the Grotto, they just felt bad for us stupid Americans and wanted to give us a ride.  After another 15 - 20 minutes driving we finally arrived, I don't know if I would've made it without them. We weren't even done here, after the entrance you walk for another 750 meter to reach the Grotto where, of course, pictures aren't allowed. 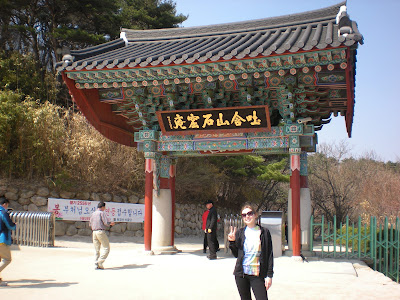 By this time it was about 3 o'clock and we were ready to call it a day. We got the bus back down the mountain, motion sickness included due to the hot, crowded, jerky bus.  I don't think bus drivers here understand the concept of slow acceleration or deceleration. If there's more than a 5-foot gap between them and the next car they're going to gun it to catch up and then immediately slam on the brakes - thanks.  Not to mention when it's busy you wind up standing in the aisles of the bus, quite the adventure.

The rest of the weekend in Gyeongju was spent meeting up with some of our friends from orientation, eating, drinking and walking - oh and some noraebanging, always a good time! Sunday morning we decided to get breakfast - the night before we had seen a cafe offering omelets, and french toast!  Well, glad my sweet tooth wasn't calling that morning because the French toast here is not exactly what you'd expect....Dana got dry toast, a green salad, and some nasty looking bacon.

All in all - great weekend in Gyeongju, there's still a lot more to see in Gyeongju so I'm sure I'll be making a trip back.