During my downtime at school you can usually find me perusing different 'Korean tourist' websites, looking for ways to spend my weekends.  A while back I stumbled across information for the Cheongdo bullfight festival, I mentioned it to a few friends with tentative plans to go but didn't make it much further than that.  Apparently it's the nations largest bullfight competition and dates back about 1000 years. About two weeks ago the topic came up again, but this time through an organized tour with Waegook Travel., I usually tend to pass on the organized group travel plans, but the price was decent and I figured it be nice to have a bus cart me around and not have to figure out trains, buses and taxis.  Plus my friends Meredith and Sara were interested in joining so I figured it'd be a good day.

We were all meeting at Waygook Cook - a foreigner bar in Gumi at 9:30 in the morning.  Once again another early Saturday for me, had to catch the bus at about 8:30 to make sure I'd get there in time.  Oh, and of course Korea decided to dump a rainy, gloomy day on us for our travels. We had just under a two hour ride to get to the stadium so we of course decided this would be best spent drinking.  Beers cracked at 10am, we knew we were starting what was about to be a great day.  We arrived at the stadium (still raining) had a quick tour of the museum area and then were off to the stadium. 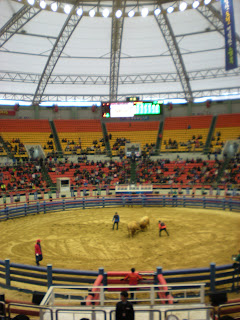 The first bull match - it's nothing like you might expect when you hear bullfight.  The Korean version is much more humane and low-key.  The bulls basically butt heads until one of them gives up, there's no blood or anything, it's more like two bulls playing with eacheother until one gets bored and walks/runs away. 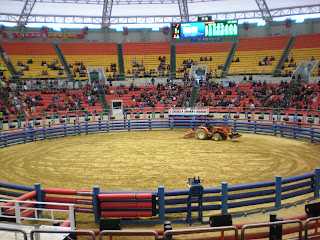 Zamboni! Gotta make the sand pretty for the bulls 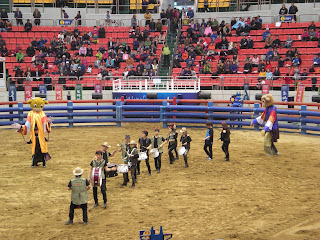 Quick little "intermission" performance - there was a good 20 minutes between every bull match, so they provided us with some entertainment. 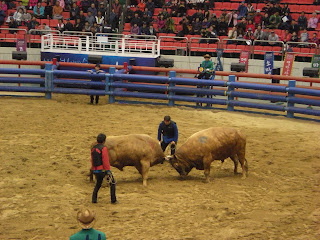 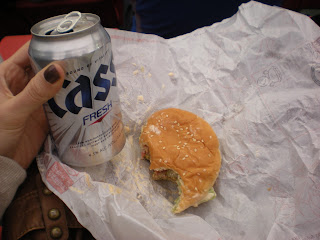 Of course the first time I eat Loterria (basically Mc Donalds) would correlate with day drinking. 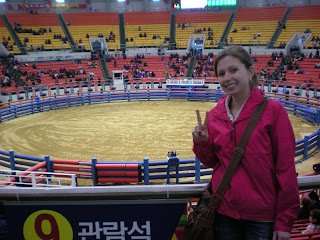 The vendors nearby lucked out, thanks to the rain and cold I bought a new jacket.

As part of the event you were supposed to wager on which bull you thought would win.  Some of our friends went up for the first round to place some bets, when they got back and I asked which bull they were rooting for I got confused faces. They meant to be betting for blue but weren't really sure if the ticket salesperson understood them and couldn't read their ticket to confirm. They didn't really have any idea what to do if they won either.  After that experience, my knowledge of bulls, and lack of luck I decided to keep my 5000 won for better things.

Although there was more fun to be had at the bull wresting match our group opted to depart for our next destination, the wine tunnel!  It was maybe a 30 minute drive and then another short walk. Normally I would have enjoyed the walk part but by this time my feet felt like I was wearing sponges for shoes so I just wanted to be somewhere warm. 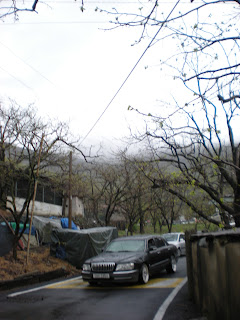 Where is this mysterious wine tunnel? 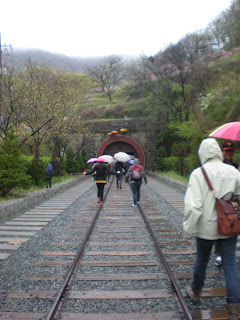 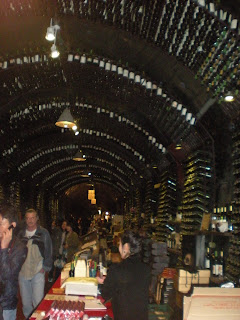 The wine bottles coating the walls of the tunnel, pretty cool. Unfortunately the wine wasn't quiet as enjoyable.  It was a Korean version made from persimmons and at $3 per glass I decided one was enough. Not to mention my disappointing when they said "wine tasting" which I thought to mean, you know a few samples, nope one short pour of a glass.  Oh well, better luck next time. Oh and on that note, i'll take a good bottle of wine from anyone that wants to send one my way - they don't really exist in this country. Looks like my dad may be making a stop at the duty free for Whiskey and Wine on his way over. 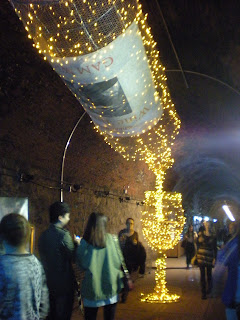 The walk to the end of the tunnel was worth it

The day ended with Sara and I eating some deliciously bad for you Ramyeon - super cheap too! There was the option to stay at Waygook and drink the night away but a hot shower, warm bed and a movie was calling my name.