Here, There and Everywhere In-between

Um it's may? I'm sorry when did that happen?

The last few weeks i've started feeling a little bit more like a resident than a tourist, mainly for the fact that I haven't been spending my weekends jetting off to different cities. However, despite the fact i've stayed closer to home i've still kept busy and have been experiencing new things daily.

Two weeks ago I somehow wound up at Camp Carol - the US Army base in Waegwon.  I convinced Sara to go along with me as there was no way I was making the trip on my own.  We were supposed to meet up with Yoshi, who I met just over a month ago, and some of his friends for bowling and beer.  Sara and I took our time strolling the river walk in Waegwon and just catching up on life before heading that way.  Apparently we took too long and missed out on the bowling but met up with a group at one of the bars there.  I can honestly say I have never been stared at by so many people at one time (and that's saying a lot, do you KNOW how much Korean's like to stare at foreigners), apparently the army base doesn't get too many visitors from the outside.


I stayed at Sara's and the next day we did some shopping around Waegwon and then met up with Victoria and Andy (both from our training class) and headed to Gumi for a BBQ and some wine, at Waygook Cook - the local foreigner bar.  I feel like we did this day a little out of order because after three glasses of wine Sara and I went to meet up with some other friends to see The Avengers (side note - that movie came out here about a week before it did in America - haha).  After the movie we went to Corona (another foreigner bar) to meet up with some friends and have a few drinks.

This last week was pretty easy due to Mid-terms, well for me at least, can't say the same for the teachers or the students.  My students have been spending rediculous hours at school to prepare for these tests, even studying during lunch.  Case in point, I saw my students leaving school last week at 11pm when I was on my way home from a friends house, crazy.  As part of our contract we have to show up when school is open so my mornings (wed, thur, and fri) were spent skyping, on facebook and trying to talk myself into lesson planning (not much of that happened).  I then got lucky and was invited to staff lunches every day and free to leave after that - wooohoo half days!   Thursday we were supposed to have an afternoon meeting with our club (yes all of the teachers had to join a sports club), but mine decided they just wanted to go home after lunch - so much for golf.  Instead I somehow wound up at the tennis courts with the, must more loyal members - this may be due to the fact that the principal is part of this group.  Now, I haven't played tennis since I was, what like 10 years old? Thank goodness I decided to dress down that day because I was up first on the courts - thankfully they took in easy on me and I think I did okay.  That was until I saw the rest of them show me up with their skills - that's ok though, I sat on the sidelines and drank beer with the Biology teacher.  I guess they play tennis every afternoon after school so I may start going more often.  Maybe with some practice next time I won't launch a ball over the fence and down the road... 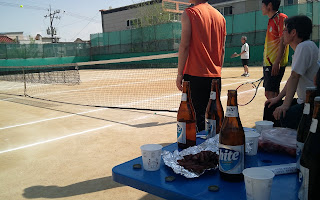 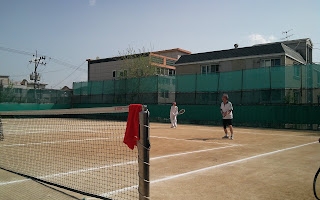 After about 3 hours of tennis I decided to call it quits - and thankfully I had an out.  I was meeting Loudine (fellow teacher in my neighborhood from South Africa) for a yoga and spa session.  Little did I know there's and awesome gym and spa right down the street (ok a few streets) from my house.  It's 8,000 won entry and you get full access to the gym (basic weightlifting equipment and cardio machines), classes and spa! Yoga was interesting - felt more like a yoga/pilates class with all the core work mixed in but I enjoyed it.  After we went to the spa - and yes typical Korea, completely nude spa.  This was actually my first experience in the buff with the Koreans and I must say I enjoyed myself.  There are a variety of pools to soak in ranging in temperature along with three different sauna rooms, needless to say - I will be back soon!

That's all for now, next time more pictures!

Email ThisBlogThis!Share to TwitterShare to FacebookShare to Pinterest
Labels: school