Last week Friday was our school festival so leading up to the event I decided to do a lesson on festivals around the world.  I found some material on Waygook so I didn't have to do too much work (sorry i'm lazy) and then at the end of class I thought it'd be fun to let the students create their own festivals.  I let them work in groups with hopes that this would prompt them to actually do the activity - I have a few sloth students that like to pretend to be invisible and sleep through most of class. (although who can blame then, they rarely get a chance to do so).  I must say I got some interesting festivals in return... 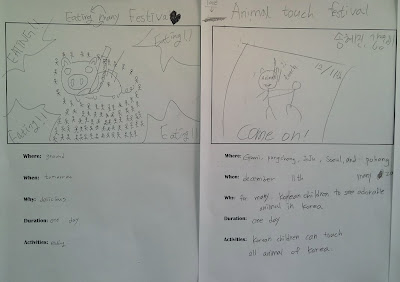 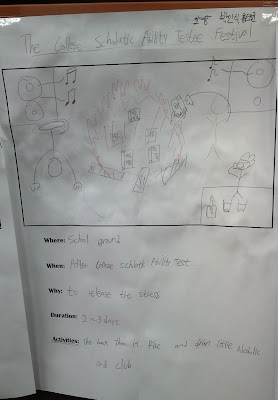 I think my kids need a break - this was one of many drinking/club/smashing things festivals that I got.  Another was "break the school festival" one for "smashing cars" because we're stressed and it's fun.  Oh and then there was the one "I'm not a student today" where you can be anything but a student for one day - along with those I had about 15 "sleeping festivals".  I've been wondering what exactly the kids do for fun, other than the occasional shopping trip, going out to eat or playing computer games.  No after school sports or clubs - that time is for more studying, and no school dance like prom or homecoming, so what do they do to relax, kick back and enjoy the roller coaster that is high school? Well I got my answer on Friday - SCHOOL FESTIVAL. 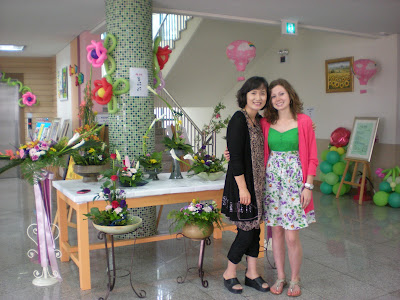 A few months ago I recall asking my co-teacher what happened at the school festival and she said "oh not much, some other schools visit and we have some events".  Then the week leading up to the festival I was asking my students what they would be doing with the unanimous answer of "DANCING".   With this limited information I really wasn't sure what to expect on Friday - a full day of dancing? Some pictures and posters hanging up? Other visitors? Then the day came and I was pleasantly surprised.

Unfortunately the 3rd graders had to have normal class for the majority of the day and my co-teacher was lucky enough to have to teach those all morning so I was left alone at my desk with a schedule of events (in Korean), although she did highlight some key times.  I wandered the halls checking out some of the photos and pictures and then made my way to the auditorium at 10:00 for the dancing portion of the program.  I know dancing is big in Korea but I had no idea what extent my school went to for this festival.  Decked out stage, full out lighting and sound system, including a fog machine, spot lights, bubble machine and these sweet little flame things.  Each grade had a time slot to perform and what made it even more fun was that almost every student participated in the events, even a few teachers braved the stage - kind of jaded I wasn't asked... 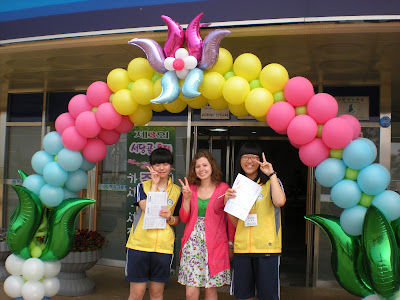 Two of my students and I 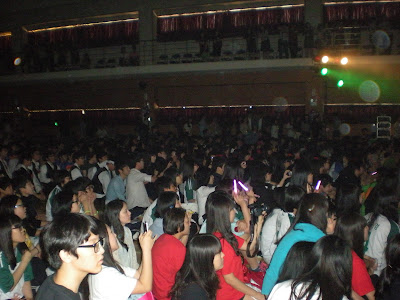 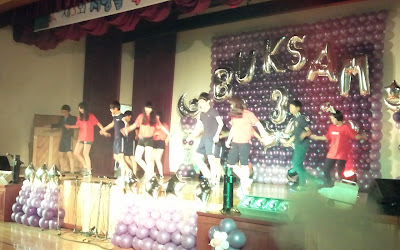 At 12 we took a break from the show for lunch and other activities - not knowing that there would be a pelthora of food available from the students I ate the school lunch (which was actually really good) and then headed out for the festivities.  Each class was responsible for creating a booth to raise money - many went with a food theme (Dduckbokki, patbingsu, pork, chicken, toast, banana smoothies, and slushies - there may have been more it's hard to remember) but there were a few other creative ideas.  One group had a "fortune telling booth" where you paid 500 won to select a number which told your fortune - good or bad.  The sign was in Korea but most of the results I saw were "bad"- drink a cup of soy sauce, hoola hop for a minute, or wear a pedometer and jump around like an idiot until it reaches 100 (that's what I got).  There was a group selling hand made crafts ( I got talked into buying a keychain that looks exactly like our gym teacher), face painting, water fun fighting and the water balloon throwing booth. The boys voluntarily stood at a wooden cut out with only their head poking through while patrons got four attempts to nail them in the head with water balloons.  My boys were begging me to play and i'm not sure if it's because they wanted my money or though i'd be terrible - but I gladly stepped up to the plate, and on both attempts got in at least one good head shot.  This was one of the many instances where I feel like a kid again - most, if not all, of the teachers were sitting around some picnic tables eating, drinking and talking. I joined the group a few times, enjoyed some makoli (Korean rice-wine [which was flowing like waterfalls])  but then made an excuse to make my way back to the students.  I always feel weird when the kids treat me like a teacher because I honestly still feel like I could be one of them.  It's good tough because although I feel that way, and am able to joke with them they do still hold that respect for me. 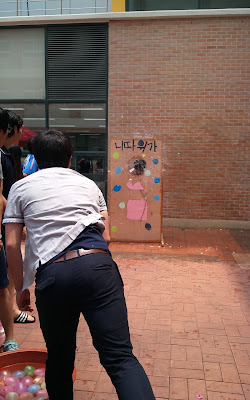 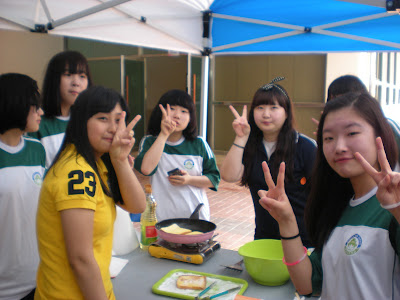 After lunch it was back to the auditorium for the second round of performances - this time signing.  I was surprised at some of the students who got up there to perform - some of my shyest kids were up there, one even signing solo! Two boys kicked off the afternoon with a rap (not that common here but they were good) follow by about 10 other performers.  We had another break from 3-5 (which I and the students agree was too long - hence why I snuck home for 30 minutes to unload my camera and charge my phone)  and then it was back yet again for more performances.  By this point part of me wanted to leave (it was 5pm on a Friday afternoon) but I was having too much fun, and am I ever glad I stayed.  The rest of the performers were by mixed groups of friends (as opposed to the morning which was grouped by class) and a few guest performers from other schools.  The events finally wound down around 7pm although I feel like the kids would've kept going had the school let them.  There was supposed to be a teachers dinner after but I had to skip out so that I could catch a bus to Waegwon so I could stay at Sara's house and catch our 7am train to Busan.  I felt bad not going but then again it probably would've been one of those instances where I sit in silence and wonder what everyone else is talking about and laughing at.  Maybe next time. 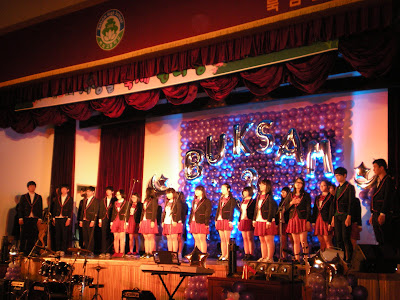 This was probably one of my favorite days in Korea thus far, the students finally had a chance to "let their hair down" for lack of a better expression and show some of their personality.  I was able to talk to the students more and get to know them - including seeing all the couples hand in hand throughout the day.  Usually the only time I see that is when I bump into them on the stairway (where they thought they were hiding).  I'm hoping the days events and interactions with my students will encourage more of them to open up and talk to me both in and outside of class.