After staying around town for a few weeks I decided it was time for me hop on a bus.  I was originally going to visit a friend in Ulsan but plans changed and we're going to have to reschedule.  After hearing from a few friends I decided it was back to Gyeongju for me.  Saturday morning I woke up at 7am (thank you internal alarm for adjusting to no longer let me sleep in) which was an hour before my alarm.  I had tenative plans to ride my (new) bike to the bus terminal and since I was up early I decided to go for it.  It took me about a half hour, much better than the stupid bus and much more enjoyable views as well.  My friend Sara planned to arrive around 12:45 which meant I had just over two hours to myself.  Being a beautiful day I decided to start by walking to Daereungwon Tumuli Park and the surrounding area, noted as world cultural heritage sites.  This is where most of the royal tombs of Gyeongju are - some lay outside the gates but I wanted to get the full experience so I paid the whopping 1500won (< $1.50) to enter.


Next stop, Cheomseongdae Observatory, which I expected was only a few minutes away on foot.  Everything in Gyeongju is gorgeous, my walk to the observatory was through more tombs and beautiful fields of flowers and green! So much green - something I seem to be lacking in my city, I get more cement and dirt... Anyways the observatory was built during the reign of Queen Seonduk in the Shilla dynasty and is the oldest existing observatory in the far east. 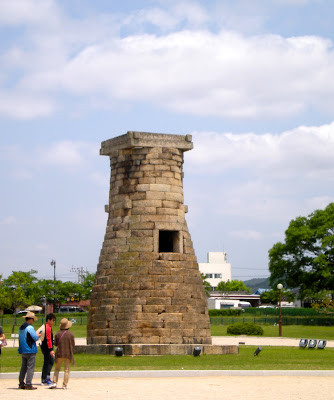 Just up the hill from the observatory is the Gyerim forest. It is said that King Talhae one day entered the forest after hearing a hen calling.  The king found a golden casket hanging from a tree holding a smart looking boy who was crying.  Thus the forest got the name Gyerim after the hen.


I made my way back to the station to meet up with Sara and Amanda for an afternoon of shopping.  Sara has a Korean wedding to attend next weekend and wanted to find some traditional gifts to give the bride and groom. Amanda had heard about a folk craft village towards the outside of town so we jumped on a bus to explore.  The shopping area focused mainly on hand crafted ceramics and were they gorgeous!  I may have to go back to buy some Birthday and Christmas presents - or things for myself, although it's hard not knowing where i'll be a year from now. 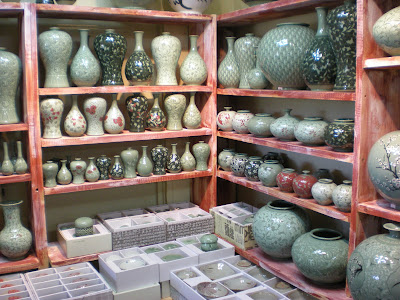 Later that night I met up with Son (my awesome host in Gyeongju - soon to be my second home).  We  he cooked some chicken, rice and veggies and we had wine, nice low key dinner.  The weekend before he wanted to get a group to go bowling but that failed so I said i'd try it out this week.  The ally was pretty small so we had to wait about a half hour (which we spent at the nearby 7/11 drinking beer since they didnt' sell any at the ally, weird).  We bowled a few games, in which Son kicked my ass - guess I have to practice for next time, then called it a night.  Son got up at 7am to meet a friend in Pohang for a hike and graciously let me sleep in and later let myself out.

I again decided to walk back towards town - I figured I had the time and it was gorgeous out so why not.  I picked a new route as opposed to the rive route we took last time, passing more beautiful forests, the Gyeongju stadium and a nice river crosswalk. 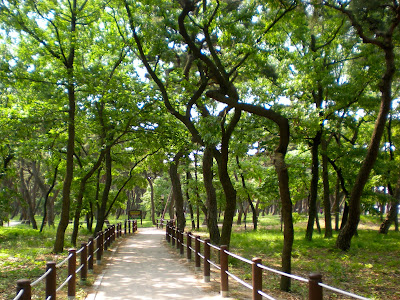 After about an hour I found myself at the station - sat down to rest for a few minutes, use the bathroom (they have real toilets there) and then it was off to Anapji pond. The area around Anapji includes a representation of the palace during the Unified Silla period.  The original area included many buildings, Imhaejeon hall, a garden and after 674 a lake and artificial hill to plant rare flowers and trees, and to raise birds and animals. After seeing the pond I decided to make my way towards the bus terminal, which was once again a beautiful walk. First I walked through Gyeongju Wolseong, a large open area where Sinwolseong palace once stood.

Once again I had a successful weekend in Gyeongju, I knew there was a reason that I wish I had been placed there (before even coming to Korea).  The city is gorgeous, SUPER easy to navigate and has a great contrast of history and present day amusement.

Much love to all my friends and family,
Stephanie