After a few weekends of adventure I decided it was time for me to stay closer to home for once. Originally I was hoping to catch some of my students playing soccer but their game turned into practice so that was no longer the plan. Friday night was spent at Loudine's house watching "What to Expect when you're expecting" eating pizza and drinking wine, i'm beginning to really enjoy these movie nights.  I had been texting Shaun (the newbie in town) about the Packer vs Bears game - yeah he's from Chicago and of course, a Bears fan.  At some point during our conversation we decided we were going hiking the next morning, always up for a challenge I decided we'd try the hike behind my house annnnd take it all the way to Gumi.


So the hike starts with a fairly steep 2.6km hike to the first peak, hyojabong (528m), then you have a bit of downhill and uphill mix for the next 1.2km to dosuryong (which is only considered a hill, not a peak).  After this it's downhill for a bit until you reach the base of Geumosan, but not the base that most people are used to with the parking lots, cable car entrance and picnic goers, we were at the back entrance.  There were few other hikers along our trail, so after a few forks in the road we were mildly afraid that we may have taken a wrong turn.  I figure all the trails end somewhere so mine as well keep going rather than turn back.  According to the map it was another 2.3km until the peak, however as the trail got a bit hairier our pace slowed and the distance felt longer and longer.  I think I worried Shau at a few points when he realized I had not yet done this hike and in reality neither of us knew exactly where we were going or when we were supposed to arrive.  There were parts that I would've liked to call rock climbing rather than hiking - ropes to help pull yourself up included.  The ascent felt as if it would never end when we suddenly turned the corner and there it was, the beautiful US military fence with mystery gear behind - yeah leave it to the US to screw up the beauty of mountain peak.  Regardless of the tainted beauty we were glad to have made it, clouds and moisture were hanging low in the sky so there wasn't much of a picture opportunity. 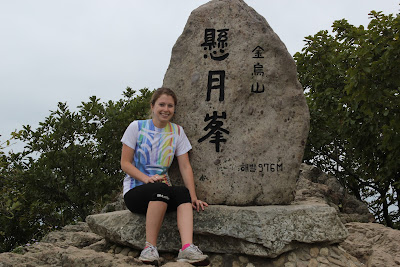 After taking in the sites for a minute we decided to check out the temple (Dad and I decided to pass this up on our last visit,  as you had to descend about 100 stairs to get there.  This time I was more inclinded to go as this is where the bathroom was located, and mother nature was calling.  The temple was really peaceful and provided an awesome view, how or why they chose to build a temple here is beyond me but i'm glad they did.  I finally came upon the bathroom, well let's say I smelled it before I spotted it.  I've always thought the saying, "it stunk so bad my eyes burned" was just that, a phrase, but now I can honestly say that's a real thing.  If the hike down the mountain was guaranteed to be a deserted as our hike up I would have opted for a squat in the woods, but knowing that our decent was along the more visited trail I sucked in all the breath I could manage to hold and made the fastest bathroom run of my life - turns out I can hold my breath longer than I thought. 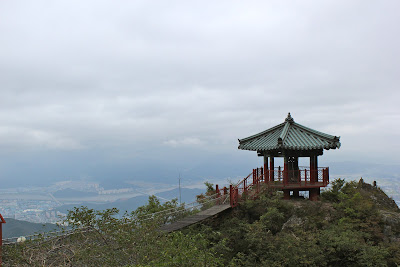 After that adventure it was time to head back down, usually this goes much faster than the way up but with the wet and slippery rocks we decided to take it slow, I didn't want to end up with a rolled ankle or broken leg.  Even at our slower pace we each slipped a few times, but thankfully no major injuries. We stopped at the waterfall on the way down and made the decision to trek up to the cave (little under a .5km round trip - why not it's not like we just climbed two mountains).  By the end of it all we covered  roughly 9.8km (6.1km up and 3.3km down - on and don't forget the .4km detour to the cave) and spent about 6 hours on the range (I would say mt. but in all honestly we climbed a mt. range that day).  I'm glad I found Shaun to tag along, I had been considering doing the trail for a while but this would have been quite the day hiking alone in the wilderness.  We ended our day with a few beers and a sandwich at the GS, I guess we were too exhausted to attempt a real restaurant or meal. 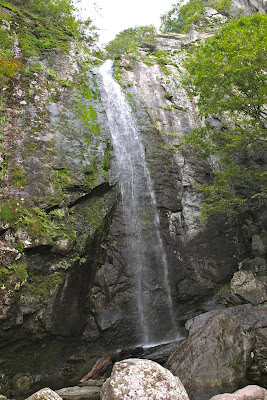