I've said it before and I'll probably say it again, many times, my school is awesome. Last week Friday we had the long awaited for sports day.  Some of my friends had this at their school last spring so I've been looking forward to the day for a while, I figured if it was anything like the school festival it'd for sure be a good day.  The students have been talking about the day for the last few weeks as each lunch period consisted of a soccer game between various homeroom classes, ultimately determining who would be playing in the final match at the festival.  As I arrived to school on Friday I could sense a bit of a buzz in the air, not the normal slow paced grumble of student but instead enthusiasm to get the events started.  The students were soon gathered on the soccer field for a brief speech from the principal followed by a yoga/warm-up routine. 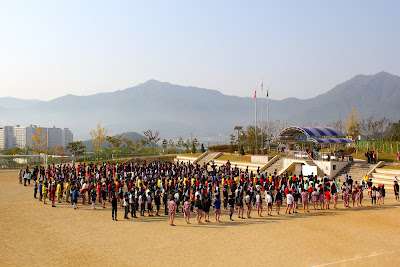 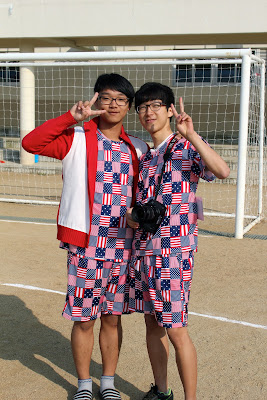 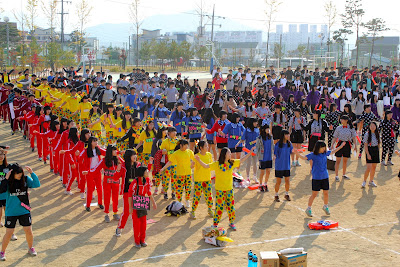 As I approached the front of the group I realized that some of my troublemakers, but also favorite boys, had volunteered to act as STAFF for the day.  These are the boys that rarely talk in class (at least when asked to), have a bit of an attitude, and appear to only know the English words "I love you" and "Beautiful" so I was glad to see them getting involved, which also allowed more time for me to talk with them.  After the warm up the students dispersed to their various seats, each sitting with their homeroom and full of enthusiasm for the day.  By far my favorite part of the day was the level of teamwork and camaraderie among and between the homeroom classes. In the US a day like this would have been filled with chanting and cheering against each other but here most of the students were rooting each other on, despite being their competition.

The events began with the 800m relay race, each class had 8 participants each running 200m with a mix of boys and girls.  The most impressive part of the race was the fact that the kids were running on slippery sand, i'm surprised more of them didn't go down when going around the curves.  I was also amazed as I watched a few students take off their shoes, preferring to run barefoot or in their socks. After the relay it was time for some epic, full class tug-of-war battles.  These were definitely entertaining to watch, especially with the outfits the kids were wearing. 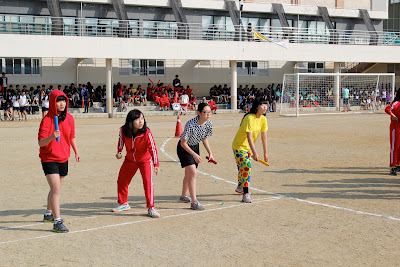 Apparently the tug-of-war was only in the semi-final stages as a winner was not yet determined, that would have to wait until later in the afternoon.  The next event was a traditional Korea game which I never did catch the name of but for English translation my co-teachers called it the bridge game.  I guess I should mention that on Thursday out of my five scheduled classes I only taught one. Obviously with Friday being a big day many of my students were begging me for extra time to practice, and to be completely honest I was more than happy to agree.  After agreeing to let class 1-1 have the time off they said I must come with to the field and practice and I soon found myself learning the ways of the bridge game.  Basically the class lines up and bends over so their backs are flat while another student (hopefully the smallest in the class) runs across their backs, with assistance from two other students for balance. As the runner goes by the "bridge" must move so that the line can continue on.  It's kind of hard to explain but actually a lot of fun! After practicing the day before and not wanting to only be a spectator for the day I chose to participate with class 1-1.  The student running was nervous that she would hurt me but I told her not to worry about it and run as fast as she could, I guess my words helped because we came out in second place!

Again, i'm not exactly what to call the next game, very similar to our three legged race but here they take it one step further and have three participants, creating the 5 legged race.   It appeared to me that all of the homeroom teachers were supposed to take part in this race,  I'd been asked by various students if I would participate with them, and agreed, but still wasn't really sure if that was happening or not.  I guess the homeroom teachers pulled through because no one came running to tie my legs together, and I was actually quite happy about that - I didn't need fall in front of the entire school. 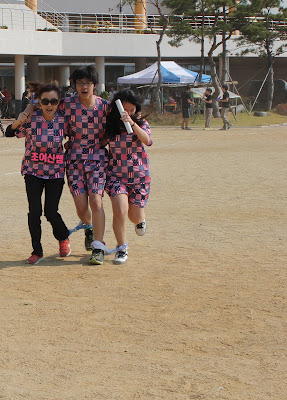 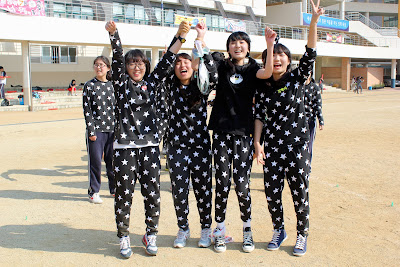 By this time the events were breaking off into different areas so that many events could go on at the same time.  Up next on the main field would be the two, much awaited for, soccer games for the 1st and 2nd grade classes. Off to the side there was traditional wrestling, team jump rope and also a girls "volleyball" game, which looked more like dodge ball to me. Having the different events gave me some time to go around and talk with my students, and of course snap lots of pictures. 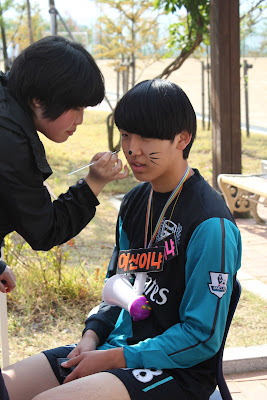 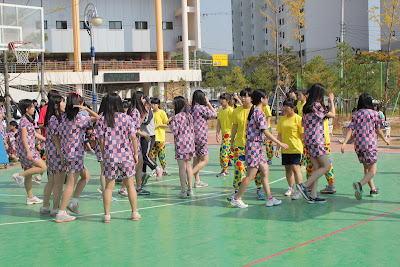 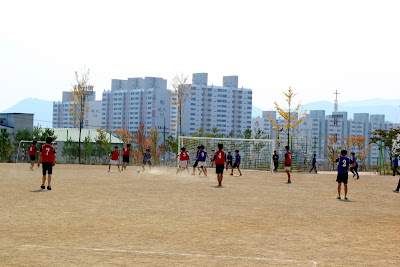 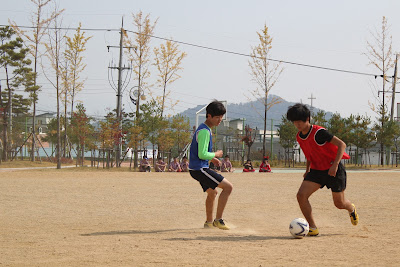 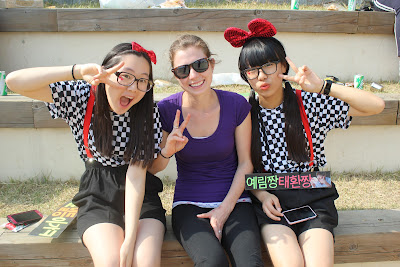 The hardest part of the day was trying not to show biased as the events went on, unlike the homeroom teachers who have an obvious favorite, I had to root for all of my students.  The first grade soccer game was one of the few events that I really did want to root for one class over the other.  Despite the fact that class 1-6 creates a really challenging start to Wednesday morning, with boys who rarely show up on time or answer any of my questions, I couldn't help but to have a soft spot for them.  They are clearly the stereotypical jocks, not enthusiastic about English class but give them a soccer ball and their true personality will shine through.  I was also surprised in the weeks before as many of them warmed up to me once they say me cheering for them on the field.  I must say I was proud when they pulled on the win Friday morning.  After the morning games we had an hour to do with as we pleased, including lunch which I was surprised many students ate despite the chicken, cheeseburgers, ddukbokki and bread they ate throughout the morning.  I took the extra time to get the face paint I had promised some of my students i'd come back for. I also offered to buy matching face paint for two of my girls who were beyond excited and appreciative.


The sports continued in the afternoon with final matches of both the tug of war and the 800m relay race, before long the sun was already starting to set in the sky (probably my least favorite part of fall and winter are the shorter days).  The day came to a close with a friendly soccer match between some of the top athletes and staff.  It was a fun game and great way to end the day, although the staff fought a strong battle the boys ultimately came out on top. 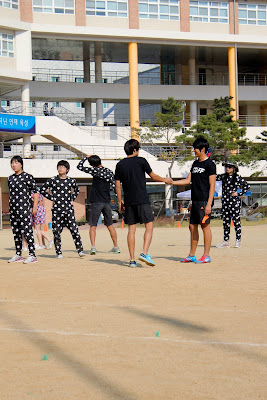 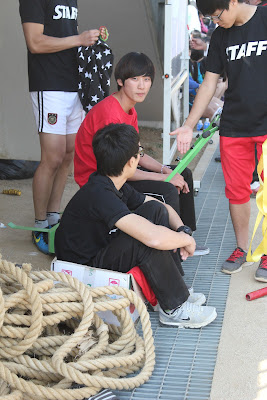 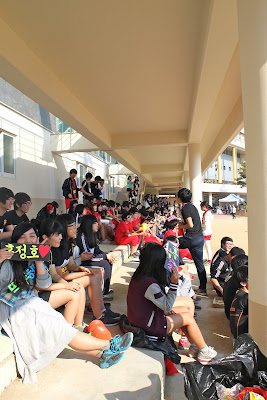 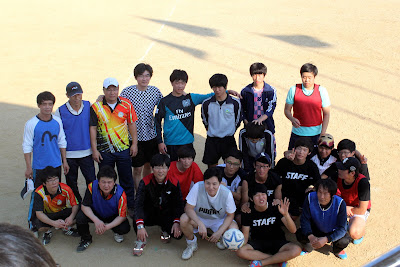 The closing ceremony was a bit less organized than the process that morning, i'm sure the students were tired, restless and ready to go home (which they thankfully got to do rather than staying at school until 10 pm per usual).  Awards were distributed for overall performance for the day as well as the best cheering team, then after a quick cleanup of the grounds and a few more pictures it was time to call it a day.