Fast forward two weeks and it's time for race number 2 - this time upping the ante a bit and going for the half marathon.  Honestly i'm not sure what I was thinking but I guess it is something that has always been in the back of my mind - on my bucket list. Especially after surrounding myself with runners - like my friend Peter from La Crosse who ran multiple marathons and always told me "just train, you'll get better at running and it'll be easy. I didn't believe him at the time seeing as I was lucky to run two miles, let alone 13.  I did find my love for exercise at La Crosse but running and I continued to have a love / hate relationship. Come Junior year another friend of mine, Jeremy, once again spiked my interest in running but I didn't seriously considered doing a marathon - sure I toyed with the idea but never got much further than that.  Jump ahead a few more years, find me living in Korea, this time friends with Charles who also told me "oh they're easy, you can do it".  I again shook it off and continued with my light jogs and yoga - but then one day the energizer bunny must have been hiding in my shoes because I could just keep going. Okay so back to the point...I did it, my first half-marathon is done and in the books, success.

The race was being held in Jinju and lucky me I had a special cheering section for this one - my mom is currently in Korea paying me a long awaited visit!  We decided to catch a bus Saturday afternoon so that we could see some of the city before spending the day at the race grounds on Sunday.  Saturday we were able to catch a few sites and do some shopping before the rain came, sending us back to the motel.  For her first (full) day in Korea i'm going to have to give my mom some credit - made her walk all over town, half the time in the rain, sit traditional style (on the floor) at a Korea restaurant AND eat some eel.  Good job mom. 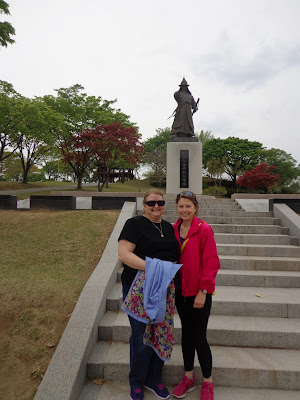 Thankfully Sunday morning I woke up to blue skies and perfect weather, so far the running gods were on my side.  Aside from my number 1 fan, my mom, I had one more major supporter behind me for this race - Peter from La Crosse (yes Peter, you've more than earned a shout out here).  For the last month or so Peter has been on me to run.  It doesn't matter that he's halfway around the world and on a 14 hour time difference, he was always there with words of encouragement or support, especially on the days when I thought about skipping a run.  As the race neared it was Peter's excitement that infected me, and boy did he come through on race day; while getting ready that morning I received the following message:

You are a train that cannot be stopped. You are a wrecking ball going on a tear. Your body might say no, but your mind will say yes. Your knees might be aching, your lungs burning, but there is nothing that can stop you.  You WILL cross the finish line with your mom watching, proud as ever, and you will have the feeling of accomplishment over 90% of the world does not.  You are a strong, motivated girl who picked up running on a whim and now is running circles around the guy who pressured you to start years ago.  You are a self-empowered young woman/girl and nothing can stop you. I'd wish you the best of luck but I know you don't need it. Run hard, run fast, and leave your doubts in the dust. You rock Steph ~ Pete

Needless to say when I read this to my mom she was immediately tearing up and I'd be lying if I said I wasn't close to the same. Although I haven't seen the kid in over two (maybe three) years I felt like it was yesterday he was pushing me to run - and now here I am. Anyway what I want to say is, thanks Peter!  We met up with Jackie at the bus terminal, who lives in Jinju and was participating in the days events, to share a taxi to the race grounds.  Unlike Gyeongju we were there in plenty of time and the crowds were a bit thinner.  My left knee decided to start giving me problems this week, just my luck, so I decided to let the Korea's tape it up for me, which worked wonderfully.  I spent the remaining time meeting other runners, fueling myself with bananas, coffee and plenty of H2O and mentally preparing for what I was about to do.  Before I knew it I was at the starting line and on my way...

Okay so a little bit about the race...the first 3k was along the river which provided for some beautiful scenery, flat ground and a lovely track to run on. I was in high spirits thinking of all the motivation from friends and family prior to the race.  Before too much longer we hit, the hill which gave me a bit of hell but I reminded myself it'd be a joy to come down 15km later. In all honesty the first half of the race wasn't too bad, sure there were a few moments of exhaustion but there was also so much to take in.  The other racers, beautiful scenery, and of course all of the friendly Koreans cheering you on along the way (police, crossing guards, water table volunteers and just random people out enjoying the day).  As I approached the turnaround [halfway] point I had a few fleeting thoughts of turning early, but let's be honest  I never would have actually done it.  I tried telling myself I was now on the way home, but those thoughts only took me so far.

It must have been another 10 minutes or so before 1) my Ipod crapped out 2) The heat started to get to me and 3) I thought I was dying.  I began regretting this decision wishing it would just be over - my feet were on fire, I could hear my breath and at one point I heard the voice of Jilian Michaels from one of my work out videos "You're heart should be gurgling in your chest right now" believe me, it was.  Somewhere around the 12 or 13km mark I had to slow down and walk for a minute, but before long there was an older man along side me urging me on - okay I got this I thought.  I started thinking about all those marathon stories I've heard/read about people making friends along the way, those people that got them through.  Was this going to be my angel of the day? Short answer, no, but before too much longer I was approaching another walker, a guy about my age.  This time I figured it was my turn to spread the spirit so I offered a 화이팅 [Fighting]! his way, and just like that he got back into it and was soon by my side.  We ran together for a few kilometers before he asked if I spoke Korean and we did the whole where are you from bit.  I wondered when he was going to get his second, or maybe third wind, leaving me in the dust but soon realized that wasn't going to happen.  This was him, my angel for the day, neither of us were going to leave the other behind, and so, for another 8km we ran together and pushed through the pain and exhaustion.  If he slowed, I pushed, I wanted to walk? he ran; and so this is how it continued until finally the finish line was in sight.  As we neared the finish line we exchanged names, I thanked him profusely and he assured me "see you next time - next marathon".  He then told me to go ahead, finishing before him to so I could get my moment of glory and pictures while crossing the finish. 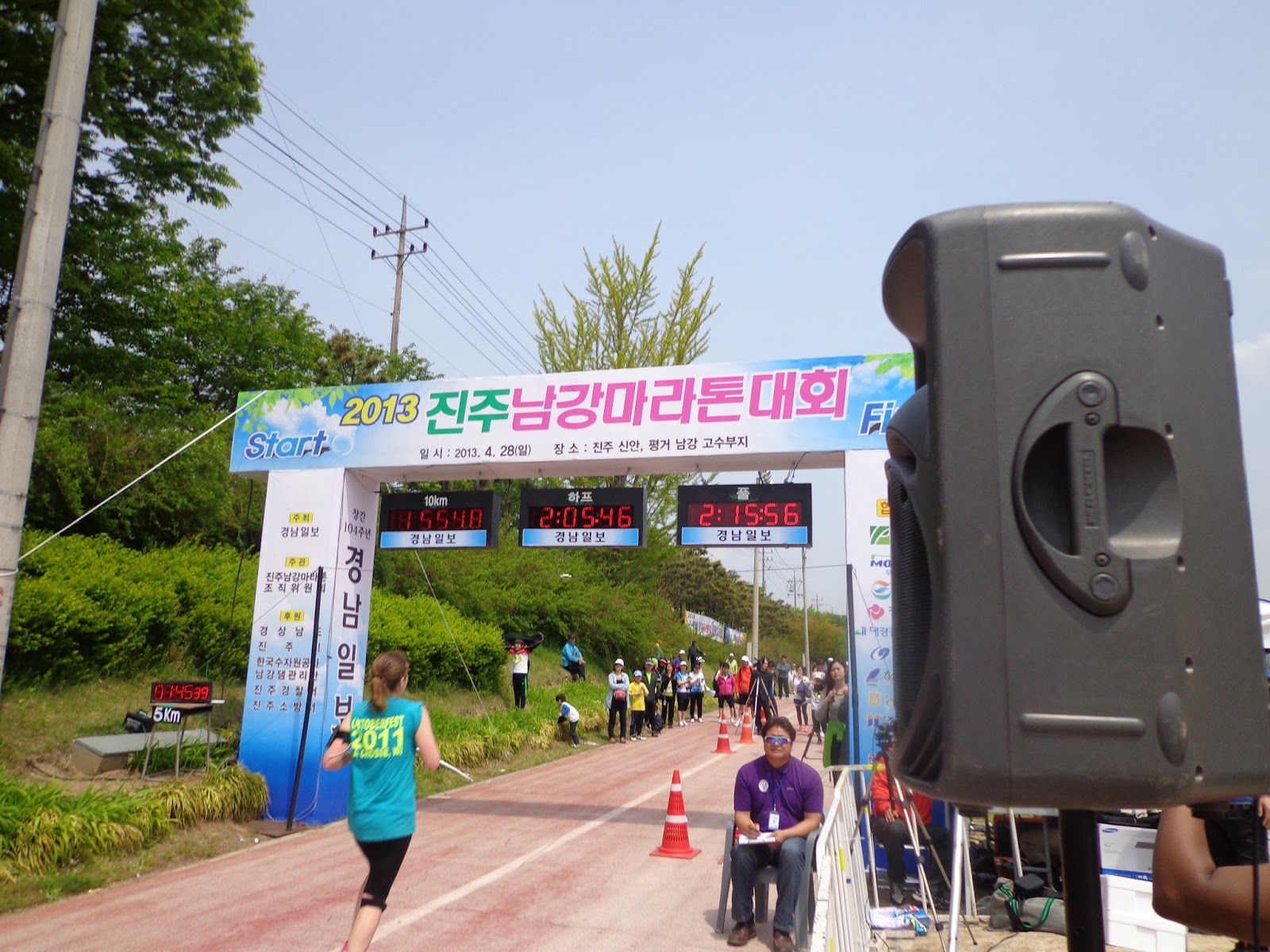 I slightly regret not finding my new best friend after to get a picture together - i'll blame my exhaustion and slight delusions, oh and the fact he was immediately met by what I can only assume was his girlfriend.  I again made a B-line for the water station and was was soon after met by my mom and new friends who congratulated and praised me.  I think there were a few different thoughts running through my head: 1) Oh my god I made it! 2) That sucked 3) Holy crap that was awesome 4) Thank god I didn't die 5) My feet hurt 6) I'm sweating...something along those lines.  I spent a few minutes trying to comprehend what I just did, collected my medal, and talked through the race with my new friends.

So my love/hate relationship with running has now turned into more of a  love/love relationship, but I'm not sure how many of these races I can handle. I'll give it another try...and I'll play with the idea of doing a full, but that might be far off in the distance. While in Korea though 10k's and (maybe) another half or two are definitely in the cards for me.  And why wouldn't they be?  They're cheap, give you a reason to visit some new cities, get some exercise, see the country, and most importantly, meet some amazing people.  If not for the love of exercise, I think I'll stick to running purely because of the community - runners are some pretty cool people and i'm glad to say I've joined the ranks.
Posted by Unknown at 10:03 AM