The Next K-Pop Star

Remember way back when, oh maybe a year ago, when I raved about how awesome my school's festival was.  Little did I know I was in for a similar treat on this trip - although it was listed as "recreation" on our schedule I soon found out that meant freaking awesome dancing and entertainment. As we ate dinner I noticed DJ's setting up the room next store...strobe lights, spotlights, speakers, etc. so I knew this was going to be good. When it was time to start I chose a spot right at the front of the room, while the rest of the teachers drifted to the back, again I'm basically a student. I wanted to get some quality pictures and videos so I could brag about my students to friends and family. The MC started with some games, basically enduing embarrassment upon the chosen few who had to dance in front of everyone (or maybe not embarrassing - them seemed to be enjoying it). 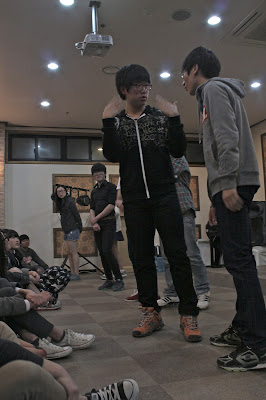 
My favorite part of these performances is the number of students that get into it. In the United States we have talent shows (which is probably the closest equivalent) but only a handful of students will brave the stage. Not in Korea here almost all of the students are willing to get up and dance, which is awesome.  Activities like this also really help the students to bond with their classmates, sure they spend what seems like every waking hour of the day with each other, but this allows them to let loose, take a break and have some fun together.  The show took about three hours that night and there wasn't a dull moment.  It began with student dances from each class - some breaking it down by boy or girl only groups, gag routines, duets, or even the brave solo artist.  Towards the end "supremier" and "B-black" performed, these are the kids that chose dance as their Friday afternoon "club activity" and i'm sure will be all-stars by the time the school festival comes around. It's hard to convey the atmosphere of the night through pictures and words but hopefully you get at least a small idea of the fun we had. 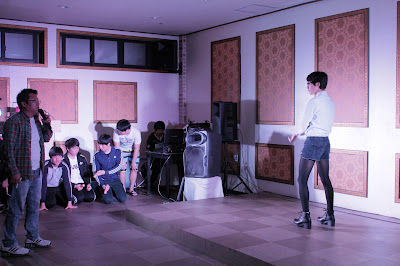 Mixed it up a little - heels and dancing to Sistar's "Alone"


By this point I was getting tired and had drifted towards the back of the room where some of the other teachers were standing. The awards session seemed to be coming to an end when I heard the MC mutter something with the word "teacher" in it, followed by the students yelling "Stephanie". Umm why are they saying my name....well yeah, as you may have guessed it was my turn to take to the stage.  I'm not exactly sure what the reason for me getting an award (A box of cheese crackers) was, but i'm pretty sure it was just a ploy to get me on stage.  The MC asked me to say a few words (which I regret not doing in Korean, but I got stage fright) so I pretty much just told the students how much I love them, how lucky I was to be at their school and on this trip and that they're the reason I'm still in Korea.  Sounds a bit corny but it's the truth.  After a quick hug to one of my co-teachers and the MC I was free to leave the stage, thank god no singing or dancing requests this time.

After all the dancing was finished there was quite clearly a buzz of excitement still in the air as students gathered with their friends to take pictures. I caught a few but the battery and memory on my camera and phone were reaching a maximum.  I know i've talked about it before but even at this school event I was coined the token foreigner as the MC asked for a picture with me.  I swear my pictures is probably all over this country, oh well I guess i've made a few people's day. Finally the kids began to disperse back upstairs and to their rooms.  Seeing as they are human garbage disposals and my school must have money to burn, the staff ordered chicken as a reward for all the hard work.  I'm pretty sure the standard motorbike delivery was not suitable for this order - i've seriously  never seen so many chicken boxes in one place before. 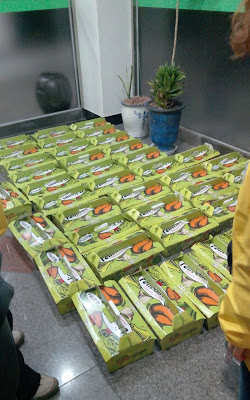