After the fun of teachers day last week I only had one more day of classes before it was time for the weekend! Buddha's birthday was last Friday so we were all blessed with a 3 day weekend.  My students told me months ago about a soccer tournament they'd be playing in at the end of May so I marked my calendar to be sure and not miss it. Thankfully I was chatting with my students about it last week because apparently they changed the dates to this past weekend instead of next, I hadn't yet made plans for the long weekend so a soccer tournament sounded just fine for me.  Loudine was also interested in seeing my allstars take to the field so she joined me Friday morning for a, shaky at first, but enjoyable scooter ride to Dongrak park. 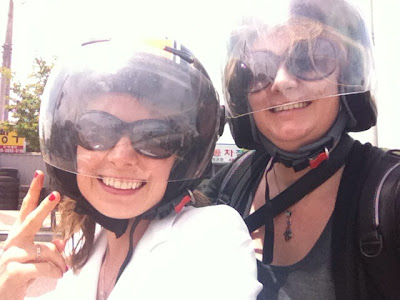 Apparently the tournament started at 7:00 am but we waited to go until about noon as my students told me their game was scheduled to begin at 1 pm.  Sure enough just as we arrived they were on the sidelines ready to take the field.  As we approached the field I could tell this was not a very popular event for the spectators, the stands were basically full of the various teams for the days events. Loudine and I were among very few females and were most definitely the ONLY foreigners there, making us quite the spectacle.  As I got closer I heard someone yell "Stephanie" and was a bit surprised until I realized it was one of my students who was also surprised, wondering why I was there.  Turns out there were a lot more of my boys attending than I had originally expected, and on 3 different teams, which made cheering a bit difficult. When I got close to team 비타민 half the team waved and half looked confused (the teams are mixed so only a few were my students) but 진화 was kind enough to catch them up and introduce me as his girlfriend. The best part is some of them actually believed him, "진짜?!" ... 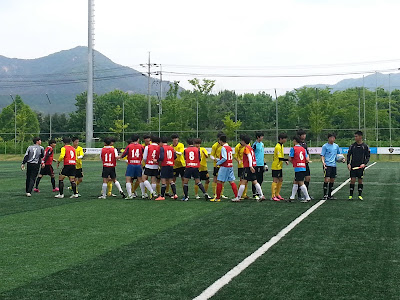 The game was supposed to be a close match but my boys had no problem defeating their opponents with 진화 scoring the first goal and ultimately pulling out a 3-0 win.  After their game there was a bit of an intermission as the introduced all the teams participating that weekend along with a speech from last years MVP (one of my own) 이장희.  While the tournament carried on I spent some time talking with my students, many of which were confused/surprised that I came to watch.  Seeing as I was the only foreigner and what seemed to be one of the only spectators there i'm assuming my students really appreciated it, if nothing else their friends seemed to be shocked that their English teacher came to cheer them on. 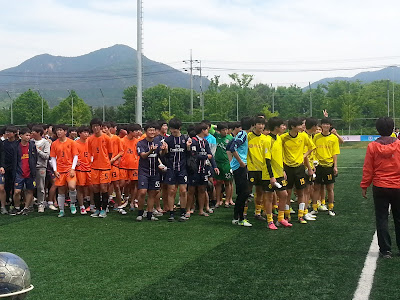 After the fun we made our way to Gumi station to catch the train to Daejeon to visit our friend Jana, who recently moved there.  We spent some quality time catching up and exploring the city but all too soon  it was Sunday morning and time to think again about soccer.  I texted 진화 to make sure they had made it to the semi-finals (although I had no doubt) and sure enough they were scheduled to play at 1pm again.  Sunday was our friend, Joonwoo's birthday so we treated him to lunch before making our way back to the field.  Heads turned once again as we made our entrance but everyone was excited to see us. Joonwoo didn't have to work untill 3pm so he joined us as well which I think created even more confusion, the foreigner has Korean friends? 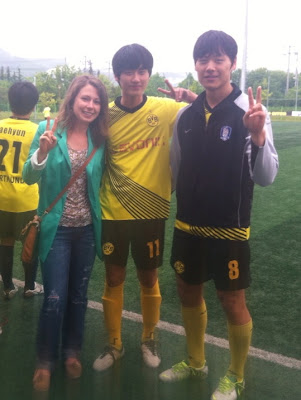 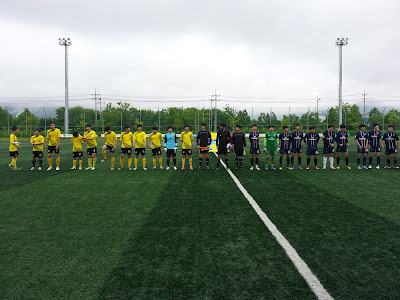 To be quite honest the game on Friday didn't capture 100% of my attention but this time I was on the edge of my seat  or actually sideline since we were standing. The other team came ahead with quick goal in the first but 비타민 answered with a beautiful play, running the ball up the side of the field, crossing center and making it look as easy as 1, 2, 3.  Unfortunately the rest of the game was a constant battle for shots at the goal, and it was evident how hard these kids wanted to win.  I could see the aggression growing, especially as I watched 장희 who's shoulders were frequently finding the sides of his opposing teammates  However as time ran down the score remained tied meaning it was time for penalty kicks - could this game be any more stressful!?

My boys pulled out a win granting them a position in the final round, which was set to happen at 3pm. Joonwoo had to work at 3 so we all followed him to the cafe to drop him off before returning [준우 handed his keys over to me and said see you later :)], with congratulatory choco pies in hand of course.  They were a bit behind schedule so I was able to talk with my students for a bit before they went to warm up.  Also, it turns out one of my students 민수 was on the opposing team - hard to cheer against him but my loyalty was with team 비타민.

The game once again capture our full attention as we watched the ball run back and forth, up and down the field.  Finally though, towards the end of the first half 비타민 pulled out a gorgeous goal, headed in by number 5 who couldn't have looked more elated about his accomplishment.  The second half was a constant battle back and forth across the field both teams holding strong.  There were a few breath stopping moments, near goals and what could have been severe injuries, but ultimately uneventful, ending with a 1-0 win by team 비타민. 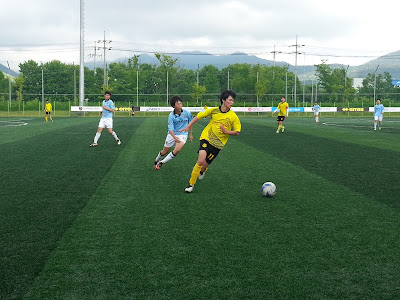 As the boys walked off the field you could see they were exhausted but also happy to have won.  I got a few high fives, lots of smiles as the boys quickly made a bee line for water, food and a change of shoes.  The awards ceremony soon followed at which time it became obvious just how few spectators there were at this event.  I found it quite odd that there were NO parents in the crowds and really no friends that I could see. Honestly I think my friends and I were among the only fans not related to one of the teams (coaches, other academy members, etc), I guess that just made us all the more special. Awards were handed out, MVP's named and many many pictures taken before everyone packed up and made their way home (or out to celebrate).

I remember last year my students told me about this soccer competition after the fact  and asked me why I hadn't come to watch...umm?  Well this year I made sure to mark my calendar and even with the date change was sure not to miss it.  Maybe some people find it odd that I chose to stay in Gumi for a long weekend but I couldn't have asked for a better weekend.  This past week I've definitely improved relationships with both staff and students at my school, I can only hope they appreciate this time together as much as I do.  I'm continually impressed by my students abilities: smart, determined, athletic, fun-loving, hard working and still always cheerful.  I might have to rethink my career track yet again because I'm not sure if teaching in the US will ever live up to the experience I've had here. Thanks for the great weekend, boys.