Why I Love it Here

The last few weeks I've been stuck in a bit of a rut (aside from my mom's visit of course). Classes have been same old same old, and students excitement and enthusiasm seems to have died. My mom's visit obviously created a stir and a bit more merriment at school, but come Monday everything was back to noraml.  Thankfully though, the weather has taken a turn for the best, midterms are over and there is excitement in the air. Teachers day reminded me just why I love my school and the excitement continues as our sports competition is just around the corner ~~ 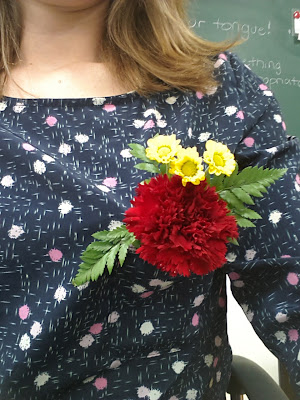 I know we have "teachers appreciation week" in the United States and despite the fact it's a week long, it pales in comparison with teachers day, here in Korea.  Wednesday started with students showing their gratitude to their teachers, weather it be through candy, flowers, coffee, juice, cakes or choco pies. Homeroom teachers get the most praise, as they should, followed by all of the other favorite teachers (generally a students homeroom teacher from the previous year).  I was hoping for some presents since the students all seem to enjoy professing their love to me on the normal days, but never having been a homeroom teacher or making strong classroom connections with the students this wasn't very likely.

After some down time the school gathered in the auditorium where students continued to express their gratitude through both, speeches songs and flowers. Every teacher was given a carnation (traditional flower to give on both teachers and parents day) from a designated student.  They also sang our school song (which I later found out was written by our principal) and the student president gave a speech.  All schools celebrate the day in their own way; some decide to close school giving both students and teachers a rest, others go on school outings (hikes, picnics, etc) but I like the way our school did it. After lunch the kids got to go home while the teachers attended the Chilgok-gun annual volleyball tournament.  I guess not all of the teachers were crazy about the tournament, seeing as a few snuck off early, but for me it was a ton of fun. Buksam high school was hosting the tournament this year which was an added bonus, home field advantage; as I finished lunch I watched all the other teams arrive...including all the other waygooks (foreigners - some of which being my friends).  You think one foreigner is a spectacle? you should've heard my teachers "Stephanie look a foreigner!!! Do you know him?! You should go meet them - are they your friends??" because yes, all foreigners must be friends with each other.  A few of them were in fact my friends but the others I could really care less about, does that make me a bad person? I don't know. Do I care? Not one bit.  I did however find a few Korean (boys) I wouldn't mind becoming friends with.... 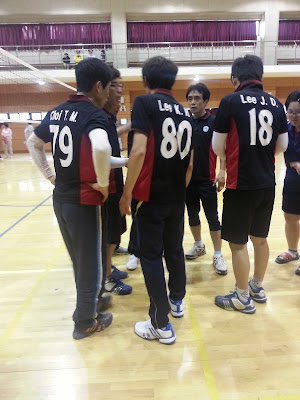 I was a bit nervous as our first game seemed to be a close match - the other team had some giants, but in the end we pulled out the win.  I spent the next few hours between the two courts (which was soon changed to only one - I guess they decided it was too hot to play outside) and also in and around the school talking with staff and students.  It's amazing how fast a day can go when you're not stuck at a computer or in the classroom.  I was soon saying goodbye to my friend Loudine who was leaving with her staff after they lost in the quarter finals (probably to go drink away their sorrows) and realized it was already pushing 5 o'clock.  Seeing as all the games were being held on the indoor court the day went a bit longer than planned and finally around 6pm the final match was starting - with Buksam high school, of course, as one of the two competitors.  For the finals it was 3 15pt sets (the rest of the games were only 1 set of 25) and the first set was intense, with Buksam finally pulling out a win at 20 to 18.  The excitement was buzzing through the gym as even more students came to cheer on the team, along with the staff and students that were already there. Thankfully we pulled out the win, although I never really had much doubt that we would, allowing us to keep our title from the previous year.


After the festivities of the day had died down and we captured our title it was time for fun.  Sometimes I'm a bit apathetic about the staff dinners but this time I was in the mood, let the fun begin.  As usual I was seated with a few women, none of which made the slightest attempt to reach for the beer or soju but after a bit of deliberation I decided to go for it, and we were soon cheersing, success! I could tell that the women at my table would soon be dropping like flies, but amongst all the Korean I did hear whispers of noraebang to follow.  My ride was soon leaving and so we made our way outside, only to be road blocked by Mr. Gang, one of the biology teachers who loves to speak Konglish with me. I had a few flashbacks to previous dinners where I prayed they would just let me go in peace, but this time was different, as Gang spoke of noraebang I volunteered to stick around! I must have been in a good mood...back inside with a new drinking partner I went.  I'm really glad I was up for it this time because I made friends with some of the new staff members, through both my drinking and korean (speaking) ability - basically they just discovered how awesome  I am.

After a few more drinks at the restaurant it was time to move the party down to the noraebang, which I didn't realize about 10 mothers would be joining - always new experiences in Korea.  The group was smaller than I had expected but tons of fun none the less.  I've completely accepted the fact that I will be signing and more likely than not I will also be doing a duet with one of my male counterparts.  This time I wowed the crowd with some spice girls, only to be followed up with an "I can't stop loving you" duet with my principal, seriously never a dull moment here.  Oh and another highlight of the night, my Vice Princiapl who pretends not to know any English was translating the meaning of the Korean songs as people were signing them!  Eventually, around maybe 10 o'clock (party animals) the noraebang session was appearing to die down as the mothers began to leave with the teachers not far behind.

I was chatting with the principal on what our next move would be before it was finally decided, or so I thought, that I would join him in meeting up with some of the staff from Buksam middle school.  I guess he changed his mind mid way because as we pulled up to the restaurant he hopped out and gave instructions on how to get me home - oh well.  But do not worry the night doesn't end there.  I realized my friend Shaun was probably with this crew so I texted him to find out and sure enough, I was right.  About 5 minutes after being dropped at home I was back on my way out the door to join whatever staff was still going strong.  I soon found out it was Mr. Gang 강병권, the new guy 김종섭, our headmaster 김원섭 and my principal 지경진, along with Shaun and his (highly intoxicated) music teacher who I met once before, in a similar condition.  These men were clearly confused at my being there, wondering where exactly I had just come from or how I knew to show up, but that only lasted for a few seconds before I was offered more soju. I was definitely the least drunk person at the table but was highly amused by my male counterparts who were equally amused or maybe amazed by the Korean I was (attempting) to speak.

All in all this teachers day blew last years out of the water, it's just what I needed to put some life back into the school days and remind my why exactly I chose to stick around for a second year.  Everything about the day, evening having to teach one of my low-level first grade classes, was enjoyable. I felt sorry for some of the other foreigners I saw that day who were attached to their cell phones, sneaking away from staff to be alone or leaving early...I guess their school isn't as cool as mine.  Hell, I volunteered for noraebanging and went back for more after being taken home.  I'm glad I did too, the next morning some of the staff who have never spoken a word to me greeted me with "good mornings" and friendly smiles.  Just another successful day in Buksam - and people say there's nothing to do on the farm. Pffft what do they know.
Posted by Unknown at 10:56 PM