A Day of Song and Dance

Along with the changing weather, final exams, and school year coming to an end we struggled to find time to squeeze in a little bit more fun, here at Buksam High school.  About two weeks ago it was time for the second big event of the year, the annual school festival.  Last year this was easily one of the most impressive days of the year for me, having never experienced something like this before I was blown away by the level of talent presented, and also the high amount of participation.  I think having so much fun last year set my expectations for this time around pretty high.  As the day approached I was slightly confused by the lack of enthusiasm coming from my students, when asked if they were excited most of them responded with "ehh no, too busy".  It's understandable, as the school year comes to a close, they're swamped with studying for the important final exams, but still, learn to relax a little you guys! Despite their lackluster attitudes I was still looking forward to the day, I mean if nothing else, I didn't have to teach!

The day started with performances from each homeroom class, with almost ALL students participating in one way or another.  I was slightly confused as the first graders started it off with choral style singing, not quiet the bang we started with last year.  I was sitting next to Anna and made a comment so she then explained that the principal wanted more singing this year, rather than dancing/performing.  I had fears that the rest of the morning was going to proceed this way but thankfully the second graders picked up the pace with some creativity and lots of fun.


Class 2-1 came out in some ridiculous outfits along with a few chefs setting up in front of the stage.  I briefly recalled the students telling me they'd be performing a 'Curry dance' but didn't realize there'd be boys cooking and serving the audience (seriously I ate cold curry at 10 am) as part of the act.

Most of the first grade students stuck to the chorus singing which, although they had good voices were a bit boring.  Thankfully, the rest of the second grade classes stuck to the performing, class 2-3 even got their teacher 이일 to dance with them which was awesome and kind of made me wish I was participating.

Probably the most impressive performance of the day came from class 2-3 and their 'Fusion Musical" (side note: Korean's love "fusion" things - food especially).  The students wrote their own musical interweaving story lines from many popular shows: Alice in Wonderland, Little Red Ridding Hood, Jack and the Giant Beanstalk, Cinderella, and probably a few others I didn't catch.  Not only did they make the story flow throughout but they worked in song and dance numbers to boot, the best of which being EXO's "Growl" for the big bad wolf scene, pure genius.

I remember telling some of my friends back home that I listen to Korean music which prompted them to question if the lyrics are in English or Korean.  Then, upon hearing that they are, of course, in Korean, they wondered if I understood. Um no, of course not, but do you really need to understand the lyrics to enjoy music? Same concept applies here, although there were a few interesting points in the day, one of which being when class 1-7 sang the Korean version of RENT's Seasons of Love, it was so weird hearing it in a different language.  Finally the morning ended with a performance from class 2-8 which included dancing, singing and even some guitar playing by their homeroom teacher 박명철. 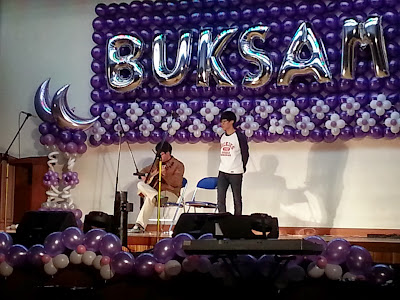 Despite the slow start, the entire morning of performances was thoroughly enjoyable, Anna and I were pretty blown away by some of the students creativity and it was fun to see a few teachers up on stage.  There was a two hour break for lunch at which time students were able to show of some of their other skills.  I remembered from last year that there was tons of food abound so I made sure to save some room (ie. not eat our less than delicious lunch).  I made a stop at the flee market where I was talked into buying some ridiculous ear warmers and a stuffed monkey on a stick (the students assured me it would be good for  hitting students with) and then made my way towards the food stalls. My  main intent was on trying 불닭복음명 which translates to "fire chicken ramyeon", and according to my students, is incredibly spicy.  This is actually one of the foods I was instructed to feed my brother when he was here but completely forgot about/ran out of time for.  Many students were impressed with my ability to eat it but really it wasn't that bad, until I was finished and my lips continued to tingle for the next 15 minutes.  Wanting to get the full experience I made my way up to the third floor where class 2-2 had transformed their classroom into a night club; DJ, disco ball and admission with hand stamps at the door, all included.  I think I shocked most of the boys when I entered the room and proceeded to dance, but it was definitely a lot of fun.

I was elected to be one of the judges for the afternoons singing competition but failed to make it back on time, I was having too much fun with the students. By the time I got back to the auditorium they were on the 5th participant so it's safe to say my judging ballot wasn't completely accurate.  Most of the afternoon performances were either solo or duet and all blew me away.  I was sitting next to 박명철 who said "I think it will be hard to judge because they are all very good!", that statement couldn't have been more true.  Just like last year, there were students I never would have expected to see up on stage, by themselves no less, so it was great being able to see another side of their personalities.

After another short break it was time for the final portion of the day, club activity performance / presentation.  This is the part that last year, blew me away (I guess that was before I had really been introduced to the Korean dance culture).  The session started with a video made by students which appeared to be a parody to many of the popular dramas currently on TV, why couldn't the put subtitles on it for me!?  There were a few other singing and dancing performances, including an encore from 대식 which was of course entertaining, but what I was looking forward to was the performance from B-black and Supremier.  These are the dance groups who'd been practicing all years and had already won awards at the local dance competition earlier this year. Unfortunately, the performances weren't as amazing as last year, or I was just burnt out for the day, but they were still entertaining none the less.

The final performances of the day were from the two school bands, Klaxons which were much better than I remember them being last year. Actually that's probably due to the fact that some of my favorite students are in the band so I had more interest in paying attention this time around.  By the time everything was said and done it was nearly 7 o'clock, definitely time for me to go home.  Although the day didn't quite reach the excitement level of the previous year I still had a great day and was amazed by all of the talent my kids hold.  To be fair the bar was set pretty high last year, not to mention I was a newbie to this whole Korea thing.