Last summer my co-teacher Anna [이혜진] came into school one day full of excitement, telling me that she had bought a new house in Daegu, but shhh this is a secret.  I'm still not sure why it was a secret but I was happy to be one of the few she told about it, the reason being, she wanted me to come visit.  She didn't actually move in until mid-october and since then has been busy with buying new furniture and getting situated in her new neighborhood.  Repeatedly at school she would tell me that she wanted me to come visit and stay with her for the weekend, getting the chance to meet her family  (including the adorable boy pictured below) and explore Daegu together.  Despite a few failed planning attempts and busy schedules I was finally able to make my visit two weeks ago, woah two weeks ago already?

Thankfully I hadn't made any plans that weekend so when Anna called me early Saturday morning and asked if I could come to Daegu that day I was ready to go (well after an extended skype session with my family).  If i've said it once, i'll say it a million times; the public transportation system in Korea is awesome, making my trip to Daegu pretty painless, and cheap.  Anna and her son met me at the bus terminal near their home and then we proceeded to the hair salon nearby.  I guess Anna wanted to get her roots touched up so asked me if I would like to change my hair as well, it just so happened that I hadn't been to a salon since umm July? so I figured yeah sure, I could use a trim.  Anna also talked me into the Nutrition treatment which I figured would probably help my friend hair (although the magic straight perm is awesome my hair is kind of shit now).  I was surprised by how well behaved her son was while we sat there with chemicals on our heads but I guess that's the beauty of the smart phone.  The shop was actually one of those hole in the wall, friends only, type of places so the owner (her friend) was embarrassed that it would not be good enough for me.  Are you kidding me?  Hair cut and nutrition treatment for only 15,000, plus a super friendly stylist?  I'd take that over a fancy salon any day.

After the salon we made our way to Palgongsan (one of the more famous mountain areas in Daegu) for lunch, well I guess that's what we considered it despite that it was nearly 5pm by the time we got there.  Anna wanted me to try some traditional dishes from the area, again the restaurant was nothing fancy but the food was delicious.  As any good Korean host would do our meal was followed by coffee at a super cute cafe nearby.  I guess we didn't eat enough because Anna ordered honey bread for us to share, basically a mountain of sugar coated, whipped cream on top, terrible for you deliciousness, so by the time we left I was full. Then, much to my dismay, on the way back to Anna's house we stopped at a mart so she could pick up ingredients for dinner - dinner!? 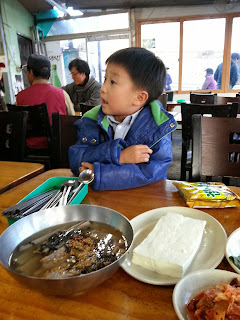 Once we returned to Anna's house we promptly changed into PJ's and made ourselves comfortable. Then it was time to play the game 한결 had been talking all day, the name of which I naturally forgot.  Basically it was just throwing little figurines at each other trying to get them to flip over, thus resulting in a win - at least that's what I understood from his instruction.  While we played games, watched TV and kind of talked, Anna was busy cleaning her house (although it was pretty immaculate when we arrived) and preparing dinner. I think i've talked about it before but Korean's are serious when it comes to eating, in that they eat A LOT.  Honestly whenever i'm with a group of Korean's for an extended period of time it feels like all we do is eat and drink and eat again, not that i'm complaining. Although I could have went without dinner when Anna laid out some Su Yuk (boiled pork) and various sides of Kimchi my tastebuds were awoken. I mean to be fair, if you put food in front of me there's a 99% chance i'm going to eat it. 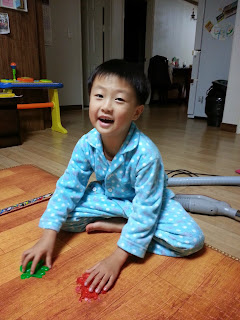 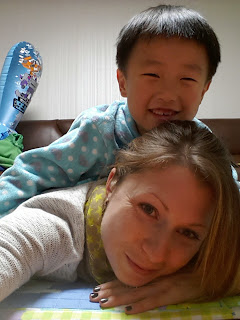 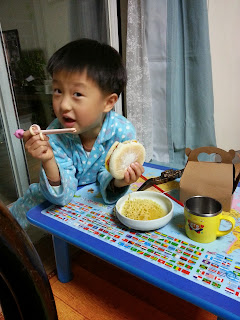 Eventually it was time to call it a night and being the awesome host and kind person she is, Anna insisted that I take her bed while she camped out in the living room. I don't know how many times I can explain to Korean's that I really don't mind the floor but I always find myself on the bed (when available).  It turned out to be a welcome gesture though because her parents arrived early the next morning and her mom promptly began preparing breakfast (for me).  Feeling slightly awkward/shy as I came out of Anna's room I was promptly greeted in the nicest way possible by her mother "안녕하세요, 사랑해요!" [Hello, I love you!] accompanied with a big, warm hug, and a quick apology for not knowing English.  After a quick shower I sat with her son and father who I regretfully didn't say much to, especially after fumbling to answer his one question of where in the US i'm from.  Anna ushered me over to the table for breakfast but when no one joined I was  a bit confused. There was literally a FEAST laid out on the table but it appeared her mother and father were not eating with us.  Anna barely touched her food, while everyone else encouraged me to eat a lot.

After packing away as much as I could, not wanting to disrespect her mother after making me such a delicious breakfast, seriously so good, it was time for church.  Conveniently located right around the corner from Anna's apartment it was only a five minute walk before we were dropping 한결 off in the children's room and sitting in our seats.  Unfortunately the 10 o'clock mass didn't come with English subtitles (that happens at 12, which I was assured we could go to next time) but it was almost more enjoyable for me to try and listen along to the Korean version.  Anna actually nodded off at one point, as did many others around me, kind of baffles me as to why people insist on going, but I won't get into that.  After church we made our way back to Gumi since I had plans to volunteer at the orphanage that afternoon and Anna insisted on dropping me off.  Our first stop was lunch which I had no plans for seeing as I was still full from breakfast (and dinner and dinner/lunch the night before).  We went to a fancy cafe near Gumi station which has great coffee and subpar American/Italian food.  Piece of advice: if you make it to Korea don't wast your time on pasta or pizza, it's not delicious here and definitely overpriced (compared to it's Korean counterpart).


After lunch we still had just over an hour until I had to be at the orphanage so we decided to drive over to Guemosan to walk around the lake and enjoy the afternoon.  I've been to the mountain at least seven or eight times now but when I tell my Korean friends that they're shocked, which i'm kind of confused about.  It's not as if the big mountain in my backyard, and the only real attraction in Gumi is hard to miss.

After a walk around the lake it was time for me to head to the orphanage to get my second dose of cuteness for the weekend.  Although Anna wanted me to return to Daegu with her and stay for a second night I had to say my goodbyes, assuring them that I would return soon - which I sincerely meant. Actually I really hope I can go back soon to spend some more time with her and her family and am even considering seeing what their Christmas plans are, I wouldn't mind another home cooked meal from her mom, oh and also a few more of those warm hugs.
Posted by Unknown at 11:30 PM