Thanksgiving isn't much of a big deal when you're halfway around the world, although when you have some awesome friends you can make the most of it. With tiny apartments and lacking kitchens it's pretty impressive what we pulled off for the second year in a row.  Obviously it's a little hard to cook a turkey without an oven but thankfully there's some sweet companies in Korea that recognize this and come to the issue (use their brain to make some easy money). Sara was kind enough to host this year and arrange ordering the turkey, leaving the rest of the food up to chance.  We all signed up to bring something and hoped that we'd have it all covered when the day came. 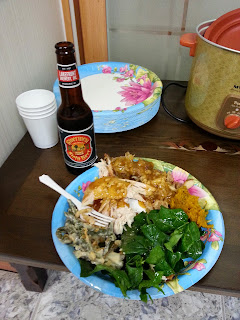 A few of us do have small ovens and after living here for over a year have become accustomed to getting creative with our cooking.  I volunteered to bring sweet potatoes (maybe because they're my favorite) and agreed to meet the boys (with the turkey) at Waegwan station at 1:30.  Lots of food in hand, we made our way to Sara's house where everything and everyone was coming together perfectly.  Sara did a great job of inviting people from far and wide so there were many introductions to go through, although I knew just about everyone in attendance. One of the most interesting things about this celebration is that we had about 5 people who hailed from countries other than America and were new to this whole Thanksgiving thing.  Okay two of them were Canadian so they get the gist, but the others were excited about their new 'cultural experience'.  The food was awesome and the company wasn't too bad either, especially the Lakefront beer I had been saving from when my brother came to visit. :)  We followed dinner with a round of Apples to Apples before people starting calling it a day and making their departure. There was some talk of going to Daegu to continue the party but I knew it was going to be an early night for me, as I had plans for early the next morning.

I'm not in the least bit mad or embarrassed that I was in bed by 11 that night while my friends were probably out getting drunk.  In all honestly I couldn't have been happier to be in my bed, especially when I awoke bright and early the next morning. Actually, it wasn't bright, the sun wasn't even up yet but yes, it was indeed early.  I almost turned off my alarm and crawled back under the warm covers of my bed but the little voice inside of me insisted, "no you're awake just get up and go, you'll thank me later." I stumbled out of bed, put on my layers of yoga clothes that I had intelligently, laid out the night before, and bundled up for what was going to be a cold scooter ride to the station.  I arrived early, giving myself enough time to buy a coffee before boarding the train at 7:40.  I arrived in Busan around 10 o'clock giving me just under an hour to catch a bus and get myself to the yoga studio.
I guess I should explain just why I got up at the crack of dawn to scooter through the cold and ride a train for two hours just to do some yoga.  I forgot to write about it but about a month before this I attended a yoga workshop in Gyeongsan (about 45min east of my home) and met some wonderful ladies. The instructor, Shauna sent us all an invite to join a Yoga Mala taking place in Busan later that month. I had actually never heard of a yoga mala before but was instantly intrigued. Basically a yoga mala is when a group of people come together (or I suppose you could do it alone) and perform 108 sun salutations. The number 108 is significant in Hinduism as well as yoga, remember my 108 bows? The purpose of this event was to give thanks, to whom or in whatever form that meant for you.  There was an awesome turnout for the event with the whole studio packed head to toe, actually almost too close for yoga comfort.  What was even cooler is that there was a large mix of both Korean and Foreign participants, young, old, male and female.

The event began at 11 and took just over three hours to complete, there was obviously time for breaks and some chatting between sun salutations but it was mostly 3 solid hours of moving.  If I had been a newbie to yoga this may have seemed daunting to me, but thankfully that was not the case. Actually I never once broke a sweat (not unusual), nor did I find it particularly challenging but it was a good experience none the less. There were nine different teachers leading the mala, each offering a different background, styles and level of experience/difficulty. Actually, that variation probably helped ease the pain of the process mixing it up throughout the day definitely made the time go faster and create anticipation as to what would come next.  It was a great day that opened my eyes to the fact that there really is a strong yoga community in Korea, you just have to find it.

After the event a group of us met at a restaurant down the street for a vegetarian buffet, fail. I really should have just went with my trusty 김밥 shops and ordered a cheap 비빔밥 but I didn't want to be anti-social.  Anyway, the food was terrible, I think I had more fun playing what do you think that is with the girl sitting next to me than I did eating, but oh well, you sin some you loose some right?  I was in no rush to get back to Gumi so I decided to walk to the nearby Gwangali beach, definitely one of my favorite places in Korea, to catch the sunset.  Honestly, if I do return to Korea I will need to call Busan my home.