The Season of Giving

Like I mentioned in my last post, my favorite part of the holiday season centers around giving, so what better way to celebrate than to give presents, and hopefully some joy, to 70+ children.  Earlier this spring when Aimee, the founder of KKOOM, asked me to help her with the annual holiday part for Samsungwon, I had absolutely no hesitation.  This is the first year that Aimee wasn't able to be in Korea for the holidays since founding KKOOM 6 years ago; she was looking for support from the foreigners here to keep the tradition going.  I attended the Christmas party last year so after seeing the joy that it brought to the kids I knew I wanted to help make that possible again this year.   Unfortunately, the orphanage is currently undergoing construction so hosting a large scale party proved to be impossible, 70+ kids and volunteers running around a midst welding, sawing, hammering and other chaos didn't sound like the best idea. Instead, we decided to host an online gift drive, asking volunteers to support one (or more) children by purchasing gifts from their wish list.  We were able to get enough volunteers (some even sending money from the US), purchase the gifts and organize all of those sent from across the country. It was a bit of chaos for a few days as we sorted through boxes, wrapped, sorted and shopped but thankfully everything came together by 3pm Sunday afternoon. 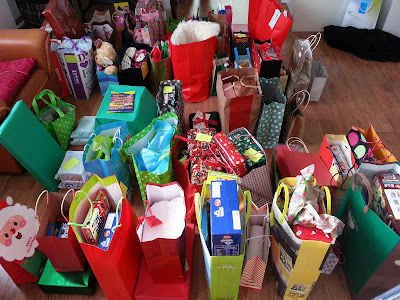 The orphanage is divided into separate houses, each consisting of 7-10 kids and one 'house mother' who cares for them.  Along with 4 other volunteers, I spent roughly two hours going house to house, distributing presents to the kids with a bonus of fried chicken, which was paid for by KKOOM.  Although we weren't able to host a full party with decorations, games and more volunteers, the kids were still able to get a good dose of Christmas cheer.  It's amazing how shy some of these kids can become when stuck in front of a group of foreigners.  Not only are they shy about speaking any English but they were also now receiving gifts from us and, you could tell, wanted to express their gratitude but weren't exactly sure how to go about doing so.  Most of the kids asked for pretty simple gifts so it's understandable that they weren't jumping forjoy over their boxes of Oreo O's, Pringles and Ramen, but you could tell they were happy with what they got and appreciated the time we spent with them.  There's really not much else to say about these kids, they're all pretty awesome, and adorable so I'll let the pictures do the talking. 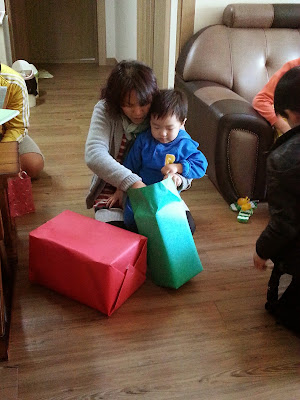 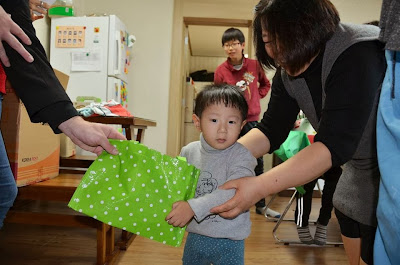 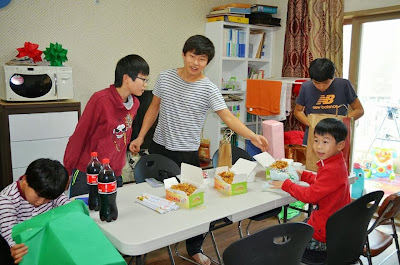 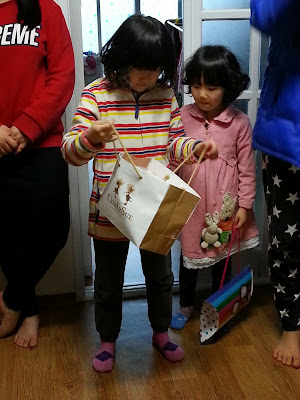 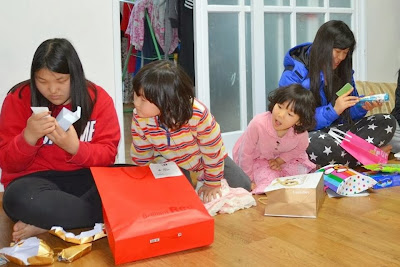 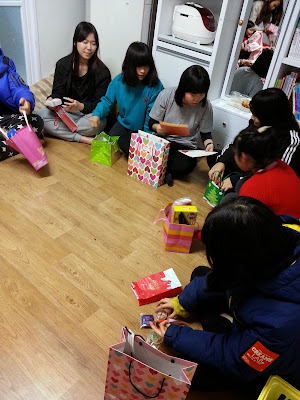 Christmas eve was fairly uneventful at school, we finished watching Christmas movies in class and only a handful of students actually uttered Merry Christmas. I did surprise my Principal, Vice-Principal, and co-teacher 이혜진 with their presents, but aside from that there was very little Christmas cheer in the air.  I left school a bit earlier than 혜진 so I could stop home and pack a bag before heading to Daegu to spend the next few days with her and her family. Although Christmas is not quite the same here, especially the food, I knew that i'd be doing plenty of eating; for a majority of the drive home we discussed everything she bought and what I would be eating for the next few days. Hospitality is the same wherever you go and generally centers around food, 혜진's mom reminds me of my own Grandmother, always offering you more to eat and making sure you're comfortable.  When we arrived at her house 혜진's mom, dad and son were all waiting for us and I was again welcomed with open arms and big smiles. We spent the evening playing with some of 한결's new toys, eating, watching the news and eventually going to bed, but not before a few bedtime stories.

I awoke the next morning to the sounds of pots and pans clanking in the kitchen and delicious smells wafting into my room.  Although I was up early I stayed in bed for a while listening to the early morning activity of the family.  한결 was up early and I heard him wishing his Grandfather a Merry Christmas before coming in to see if/when his mom would wake up. I'm not sure if there could be something much sweeter than a little boys voice whispering 어마 사랑해요 [mom, I love you] for no apparent reason.  Although it wasn't the smell of bacon and eggs wafting into my room (to be honest I don't even like that for breakfast) I was genuinely looking forward to whatever 이혜진's mom had prepared for me. I think a true testament for my adaptation to Korea is the fact that Kimchi for breakfast no longer sends my stomach into somersaults.


Thankfully my stomach was growling as I knew I'd be encouraged to eat, and eat, and eat some more; 많이 먹어...전전히와 많이 먹어.  I tried to find a good balance between filling myself, pleasing the chef and still saving room for the copious amounts of food I knew would be presented to me throughout the day.  Although I thought I had succeeded, I heard her mom mention a few times I did not eat enough, evident when she brought apples and coffee over to me minutes after finishing breakfast.

I appreciate the fact that the morning church service was held at 11 o'clock, giving us plenty of time to enjoy breakfast and get ready before leaving, also the church is conveniently located right next to their apartment. We arrived early, as we knew it would be a full house and didn't want to end up in one of the overflow rooms, thankfully grabbing one of the last available seats.  I stuck out pretty obviously and was immediately spotted by multiple church staff asking if i'd like the translation service.  Although I don't have much experience with holiday church services in the US this one seemed pretty short, there was a prayer, quick scripture reading, message and announcements from the senior pastor and we were done, kind of.  The next hour was spent listening to music and singing presented by the Zion Choir and orchestra.  They performed "The Many Moods of Christmas" which consisted of 18 different Christmas carols, some of which I've never heard although all of which I've never heard in Korean. 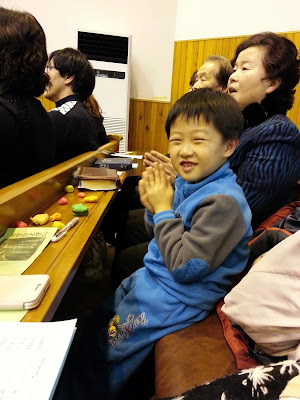 After the service finished the church was providing 떡국 to all members in the basement cafeteria, but my stomach was not ready for that. Instead, we made our way to the church cafe to enjoy coffee before heading home.  The morning was completely different than the annual Christmas celebrations I have at home but I throughly enjoyed it. I only have two regrets about the morning 1. that I didn't get a group picture with 이혜진 and her family and 2. that I couldn't talk more with her parents (if only I could learn Koran overnight).  When we got back to her house I spent a solid half hour playing a pac manesque computer game with 한결 before it was time for us to get ready and head to our next destination.  After I had asked 이혜진 if I could join her family for Christmas she said that she'd ask her friend if we could all celebrate together and so that's how I found myself in another friendly home with good company.  Her friends have two children who are both adorable, but one of which seems to be ending her 'terrible twos' faze and serenaded us with her screams a few times that afternoon.  Another bonus of the day was that they all spoke English so I wasn't lost in the conversation at all.

We spent the afternoon talking, playing games with the kids and cooking (well I didn't help much but the others were hard at work).  The delicious smells from the kitchen were making me hungry so I was more than ready to eat by the time dinner was finished.  The food was definitely not a traditional American Christmas, but it was awesome.  There was tofu salad, bulgogi, jjampong and of course Kimchi and rice.

It's definitely been a while since i've been in the company of children for an entire day and as cute as they are I'm still at the point in my life where I enjoy them in small doses.  I rather enjoy being able to eat my meal in peace without having a child screaming, asking for help, running away from the table or trying to start a duck duck goose game.  Props went to Dad this day who sat at the children's table helping his kids and putting up with their antics.  A few minutes after we started eating someone asked  him how the jjampong was but he was unable to answer because he hadn't started eating yet, what a good dad.  I was again sent to sit down and relax as the other women took care of the clean up, it's nice but I feel so useless.  I guess they'll all just have to come visit me one day so I can repay the hospitality.  Eventually it was time to head home, after all we did have to go back to school/work the next day.

When we got back to  혜진's house 한결 quickly remembered that Santa was supposed to have come that night. I was a bit confused as there were no presents under the tree, where were they hiding?  Then 한결 disappeared behind the curtains and went out to the porch  searching for something.  Finally I heard him shout "ahh he came" and eagerly came back into the living room with a black bag with his present inside; a game that seemed to be a combination of both jenga and don't break the ice.


I've been extremely lucky during my time in Korea not to have expereinced a major sense of homesickness, but I think it's clear who I have to thank for that.  The people in my life here (foreign friends, Korean friends, co-workers and students) have helped to create a place of comfort, a place that I can call home.  There's not a day that goes by that i'm not thankful for both the new life I've created here as well as the family and friends I have back home and across the globe who are constantly supporting me.